This pre-war SBD-1 wears the markings of the commander of VSB-1, a U.S. Marine Corps squadron based at Quantico, Virginia, in early 1941. VMB-1 (later VMSB-132) was the second unit to receive the SBD after VMB-2. 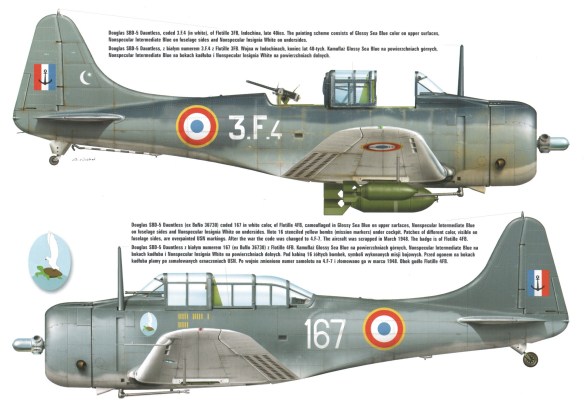 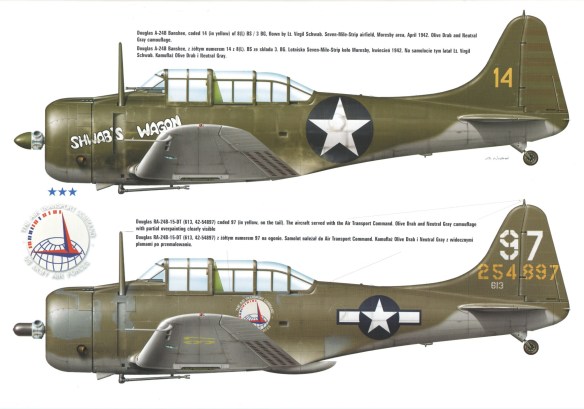 By the end of the war in the Pacific, the venerable Dauntless dive-bomber was showing its age, and yet its contribution to victory in a succession of key naval battles cannot be overstated and its tally of Japanese shipping is unmatched.

This SBD-4 was operated by VMSB-243, part of the 1st Marine Air Wing, based on Munda on New Georgia, part of the Solomons Islands chain, in August 1943.

The aircraft that found fame as the Douglas SBD Dauntless began life as a product of the Northrop Corporation, which was responsible for the BT-1 carrier-based dive-bomber of 1938, 54 of which were built to serve on the USS Yorktown and Enterprise. When Douglas took over Northrop, the BT-1 served as the basis for a reworked prototype XBT-2 of 1938, which was simply a modified development of the Northrop aircraft. In April 1939 the re-designated XSBD-1 won orders from both the U.S. Marine Corps (57 SBD-1 versions) and the U.S. Navy (87 SBD-2s) in order to equip scout and bombing squadrons of the respective service.

Before U.S. forces were thrust into action in the Pacific, Douglas had flown an improved SBD-3, this being outfitted with an additional pair of machine guns in the nose, self-sealing tanks and the Wright R-1820-52 radial engine. The first SBD-3 took to the air in March 1941, and over 500 examples had been delivered by the time Japan attacked Pearl Harbor on 7 December 1941. It fell to an SBD from USS Enterprise to sink the first enemy vessel by U.S. air power in World War II: the Japanese submarine I-70 on December 10.

Similar to the SBD-3, the SBD-4 featured a revised electrical system and was built at the El Segundo, California factory, which delivered 780 examples in the course of 1942–43. A number of photo-reconnaissance adaptations of the SBD-1, 2 and 3 were also completed in the period up to 1942. With the establishment of a new Douglas plant at Tulsa, Oklahoma, production here switched to the SBD-5, of which 2409 examples were built. The SBD-5 produced during 1943–44 was powered by an R-1820-60 engine and was followed by the SBD-6, of which 451 were manufactured with the -66 engine installed. As employed aboard a U.S. Navy carrier, SBDs were generally assigned to one bombing squadron (VB designation) and one scout squadron (VS), part of an overall air wing that also included two squadrons of fighters and one of torpedo-bombers. In practice, both VB and VS units shared similar tasks.

The Dauntless was responsible for sinking a greater tonnage of Japanese shipping than any other aircraft and was central to U.S. naval successes at the Battles of Midway, Coral Sea and the Solomons. This was all the more remarkable considering the fact that the Dauntless was considered obsolescent at the outbreak of the war, and was generally underpowered, vulnerable to enemy fire and limited in terms of endurance. Despite its limited performance, it has been recorded that one Navy SBD crew managed to shoot down seven Japanese A6M Zero fighters in a space of just two days.

In its intended role, the Dauntless made its mark at the Battle of Coral Sea in May 1942. In the course of the battle, SBD-2 and SBD-3 models from USS Yorktown combined with Douglas TBD-1 Devastator torpedo-bombers and succeeded in putting the Japanese carrier Shoho to the bottom after a 30-minute battle that cost just three U.S. aircraft.

During the Battle of Midway the Dauntless played the pivotal role, when a force of 128 was launched from the decks of Admiral Chester Nimitz’s carrier groups to seek out the carriers of Admiral Isoroku Yamamoto in June 1942. The Japanese force was finally discovered with darkness approaching, and the SBDs at the limits of their range and fuel. In the process, 40 of the dive-bombers were lost. The survivors, each armed with a single 1000lb (454kg) armour-piercing bomb, pressed home attacks on the carriers Kaga, Akagi, Hiryu and Soryu, sinking all four (three of them set ablaze in the space of just three minutes) and turning the tide of the war in the Pacific.

Subsequent actions in the Pacific saw SBD involved in combat at Rabaul, Guadalcanal and the Solomons, and Truk. By late in the war, the Dauntless had been supplanted by the Curtiss SB2C Helldiver in the dive-bomber role, but this aircraft suffered from a number of shortcomings and was never as successful as the SBD that preceded it. Once the Helldiver was on the scene, however, the earlier aircraft began to be relegated to anti-submarine patrol and close air support duties.

U.S. Marine Corps SBDs, carrying centreline and underwing bombs, are seen heading for Japanese targets on Rabaul in 1944. The USMC was the second most prolific Dauntless operator, and certainly the most successful outside the U.S. Navy. In all, 20 Marine squadrons flew the Dauntless. Less auspicious was the service of the A-24, which the USAAF had ordered in January 1941. A-24s saw action in New Guinea and at Makin, but the aircraft proved vulnerable to interception by Japanese fighters. In the face of mounting casualties, the USAAF withdrew the A-24 from the front line. The UK acquired nine Dauntless DB.Mk Is (SBD-5s), but after subjecting the aircraft to test in 1944, rejected it for service. The Royal New Zealand Air Force also took the Dauntless into battle, after receiving SBD-3, SBD-4 and SBD-5 models from Navy and Marine stocks. These saw action at Bougainville. The other combat operator was France, which employed A-24s and SBD-3s at Agadir, Morocco, and in metropolitan France in pursuit of retreating German forces from 1944.

The Stunning Combat Record of the Douglas SBD Dauntless