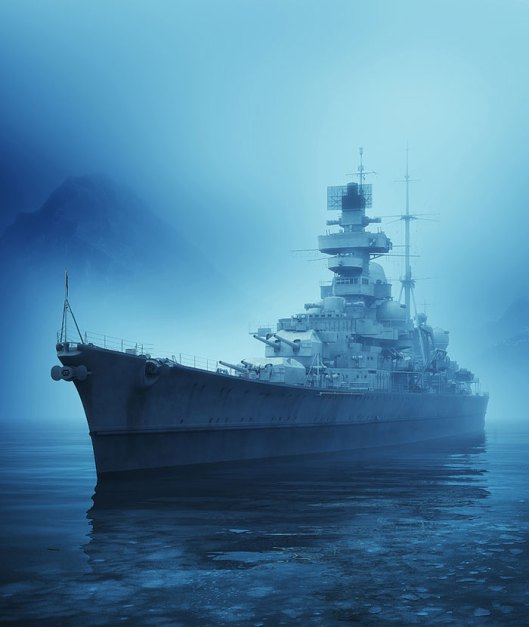 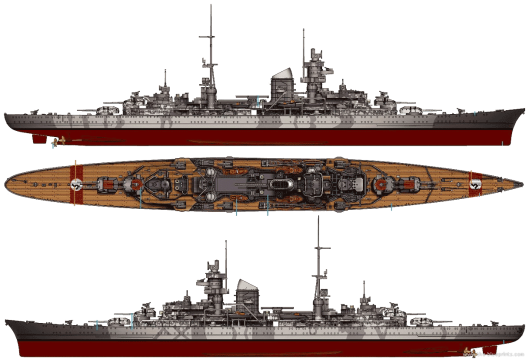 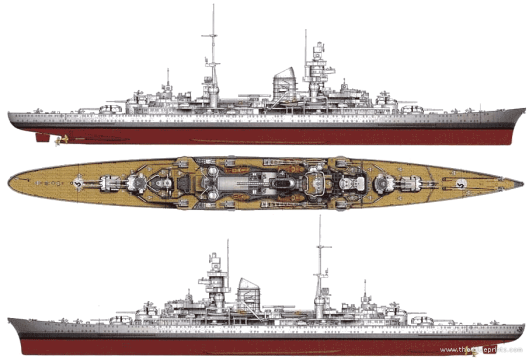 In the sheltered anchorage of Bergen in Norway, the newly commissioned Bismarck was now readying itself for action. A plan had originally been made for a combined sortie into the North Atlantic with the two battlecruisers. This plan was now not possible. The damage to the Brest ships resulted in their being confined to the dockyard for between three and six months whilst repairs were completed. Even then their seaworthiness would depend on not suffering further damage by the RAF. The Kriegsmarine leadership was, however, still anxious that the Bismarck should be used as soon as possible against Britain’s merchant fleet. The original plan would now have to be changed. It was decided that the Bismarck would still make its sortie into the Atlantic, but would be escorted by just the heavy cruiser, the Prinz Eugen.

The two warships set sail on 20 May 1941. Their departure was quickly detected by the British, and the Admiralty despatched ships of the Home Fleet from Scapa Flow to intercept them near the Denmark Straits off Iceland. On 24 May the battleship Prince of Wales and the battlecruiser Hood engaged the Bismarck and its escort in an action that demonstrated the great power of the German warship. HMS Hood was sunk and the Prince of Wales badly damaged. The Bismarck then made to escape into the open waters of the Atlantic, but was continually tracked by British cruisers and destroyers.

Try as they might, the two German warships could not shake off the shadowing force. British radar was so effective that each time they disappeared into the mist and rain, they remained visible on radar screens. With the German ships’ exact location in the Atlantic known, other Royal Navy capital ships were sent from Gibraltar to intercept. In the meantime, the carrier Victorious was diverted to attack the Bismarck. Swordfish aircraft from 825 Squadron, led by Lieutenant-Commander Eugene Esmonde, made a night attack. They came at the battleship at low level, flying just above the wave tops, and were able to release their torpedoes at a range of less than 1,100yds. Bismarck was hit amidships. The explosion was not enough to sink it, but it was severe enough to slow it down considerably.

The heavy cruiser Prinz Eugen slipped away from the net that was closing around the German ships and disappeared into the wide Atlantic Ocean. The fate of the Bismarck had by then been sealed, and the heavy cruiser’s presence could do little to avert the inevitable. Nothing more was heard of Prinz Eugen for several days, for it maintained radio silence to avoid detection by the British. A search was made for the cruiser by ships and reconnaissance aircraft, but it could not be found. Then, on 1 June, Prinz Eugen appeared out of an early morning mist at the harbour entrance to Brest – it had made its escape and had reached the safety of a German-held port. The Prinz Eugen was quickly brought into the dockyard and secured alongside one of the quays that lined the Rade Abri, joining the battlecruisers. Germany now had a complete battlefleet holed up in Brest.

The Prinz Eugen had one of the most c1ctive careers of any unit of the Kriegsmarine. After being damaged by a magnetic mine in April 1941 she was repaired in time to accompany Bismarck on her sortie into the Atlantic. On May 24 she joined in the action against the British battlecruiser Hood in the Denmark Strait. She scored hits on the British ship, and it was proossible her 8-in (203- mm) shells, rather than 15-in (381-mm) shells from Bismarck which caused the fatal fire and explosion. As she was running low on fuel Prinz Eugen was ordered to breakaway to Brest ­and so she escaped the fate of Bismarck three days later. In February Prinz Eugen accompanied Scharnhorst and Gneisenau in Opercltion Cerebus, the daylight dash through the Channel from Brest to the North Sea, but in 1943 she was relegated to training duties in the Baltic.

After a period in the Baltic Fleet Training Squadron was in action in 1944 against the Russians advancing through Poland and East Prussia. The fire of her eight 20.3-cm (8-in) guns proved most effective against Russian tanks though by 1944 the barrels were heavily worn.

On October 15, 1944, while helping to evacuate German troops from the eastern Baltic she rammed the cruiser Leipzig amid- ships, badly damaging her. Prinz Eugen was surrendered at Copenhagen in May 1945 and handed over to the US as a prize. She was subjected to the Bikini atomic-bomb tests in 1946 and was sunk as a target on November 15, 1947, off Kwajalein Island in the western Pacific.

The German heavy cruiser Prinz Eugen which surrendered to the Allies in Copenhagen in 1945.

Type and Significance: These vessels were among the largest heavy cruisers in the service of the German Navy in World War II.

Summary: Two of these units did not survive World War II. The Blücher was sunk on 9 April 1940 by land-based gun and torpedo installations during the German invasion of Norway. The Admiral Hipper was scuttled on 2 May 1945 after sustaining heavy damage from Allied bombing raids. The Prinz Eugen has the distinction of being the only large German warship to survive World War II. It was used as an experimental ship in the atomic bomb blasts at Bikini Atoll in the Pacific Ocean. It sank on 22 December 1946 as a result of damage sustained in the experiments. Two other units were never completed. In 1942, construction on one of these, Seydlitz, was nearing completion when the decision was made to convert it to an aircraft carrier. This plan was soon cancelled, and the hull remained unused for most of the war. On 10 April 1945, the vessel was scuttled to prevent its capture by the Russians. It was refloated by the Russians and scrapped. The other incomplete ship, Lutzow, was sold to the Soviet Union in early 1940. It served as an accommodation ship from 1945 to 1956, when it was scrapped.