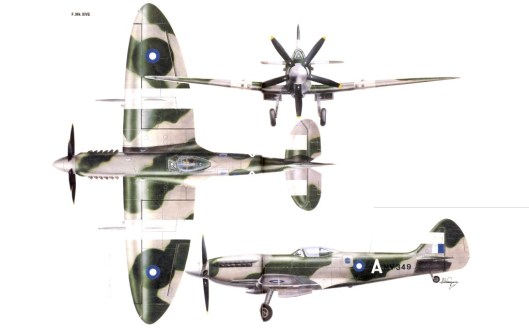 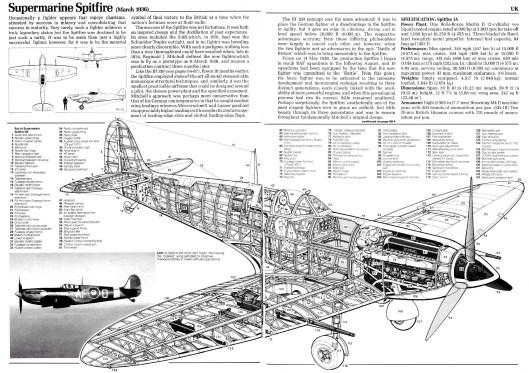 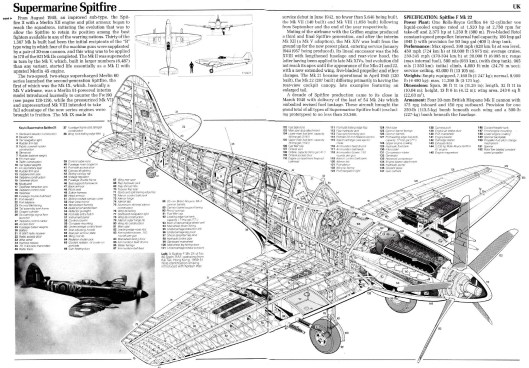 Probably the most successful British fighter of World War II; placed in front-line service throughout the war. At least 22,759 Spitfire and Spitfire variants (photo-reconnaissance aircraft and naval fighters) were built between March 1936 and March 1949 in 54 major marks (not counting variants in engine fit and prototypes).

The Spitfire was a pilot’s airplane—a very responsive aircraft with superb control harmony that gave the pilot plenty of feedback as manoeuvre limits were approached. The ability of the Spitfire’s airframe to accept progressively more powerful engines was a major factor in its continued success. Its only real fault was a relative lack of range on internal fuel (approximately 490 miles for a Mk.1, 660 miles for a Mk.VIII/IX with fuselage tank).

The Spitfire Mk.I was fitted with a Rolls-Royce Merlin III producing 990 bph using 87-octane fuel. It was armed with eight 0.303-inch Browning machine guns and played an important part in the Battle of Britain. A number of performance improvements were made during 1940, including the use of 100-octane fuel. From November 1940, all Spitfires were retrofitted with metal ailerons that increased the roll rate at high speed. The Mk.II was fitted with a 1,140-bhp Merlin XII. Tactical comparisons with a captured Messerschmitt Bf 109E showed that the Spitfire had a much better turning circle, was generally more manoeuvrable (particularly at high speed), and that the Bf 109 had a slightly better climb below 20,000 feet and was able to accelerate faster in a dive.

Photo-reconnaissance Spitfires were stripped of nonessential equipment and received a highly polished paint finish. They carried two F.24 cameras and were 10–15 mph faster than standard Spitfires. Subsequent versions carried much more fuel, increasing range to a respectable 2,000 miles. The Mk.V entered service in February 1941 and had a 1,450-bhp Merlin 45. It served in every theater during World War II and fought with distinction during the defense of Malta.

Most Mk.Vs were armed with two 20mm Hispano cannons and four 0.303-inch Browning machine guns. The Mk.V was comparable to the Messerschmitt Bf 109F2, but it was severely disadvantaged by the Focke-Wulf Fw 190A, which outclassed the Spitfire V in every department except turning circle. The Spitfire LF Vb with a 1,580-bhp Merlin 50M redressed the performance balance at low altitude at the expense of performance above 12,000 feet, and a much higher rate of roll was achieved by removing the detachable wing tips. 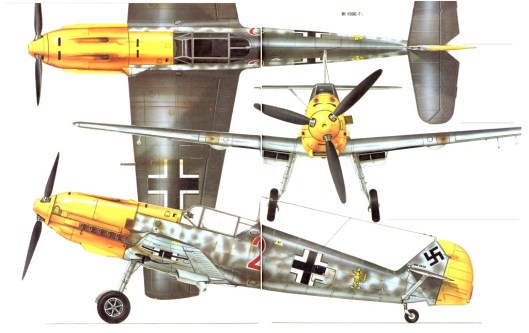 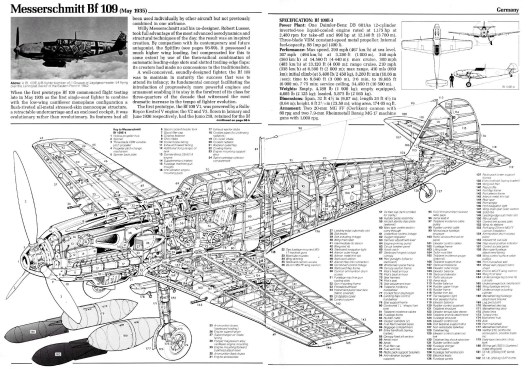 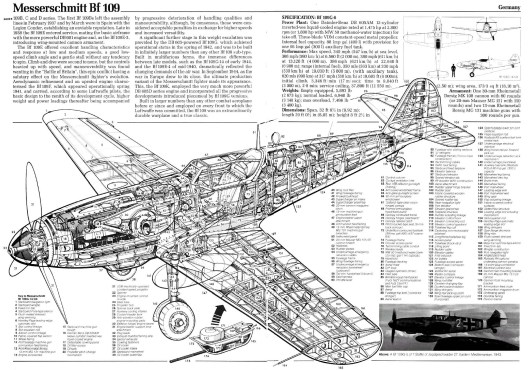 Willy Messerschmitt began developing his benchmark fighter in 1933 once the Luftwaffe desired to substitute its Arado Ar 68 and Heinkel He 51 biplanes. The prototype flew in 1935 as a rather angular, low-wing monoplane with a fully enclosed cockpit and narrow-track landing gear. Results were impressive, and in 1937 the new Bf 109B fighter outpaced all other rivals at the International Flying Meet in Zurich, Switzerland. By 1939 the first production model, the Bf 109E, was introduced, featuring a bigger engine and heavier armament. As a fighter, the diminutive craft flew fast and maneuvered well, features that helped secure German air superiority at the start of World War II. Simply put, Bf 109s annihilated all their outdated opposition until encountering Supermarine Spitfires during the 1940 Battle of Britain. Although speedier than its British opponent, Bf 109Es turned somewhat slower and never achieved superiority.

The most famous fighter of the German Luftwaffe, produced in greater numbers (in excess of 30,000) than any other fighter aircraft. Created by Willy Messerschmitt and his chief engineer, Walter Rethel, the Bf 109 was the world’s most advanced fighter at the time of its first flight in September 1935. A development of the very successful four-place touring Bf 108, the Bf 109 featured retractable landing gear, an enclosed cockpit, all-metal stressed-skin construction, heavy armament for the time, slotted trailing-edge flaps, and automatic Handley Page leading-edge slots.

Despite the pressures for ever-increasing production, the Bf 109 went through a long series of modifications, the last production version being the Bf 109K. In the process, horsepower was increased from the prototype’s 695-hp Rolls- Royce Merlin to the 2,030-hp Daimler-Benz DB 605 engine in the Bf 109K.

The aircraft served in every theater in which the Germans fought and was used by many nations allied to Germany. In the early months of the war, it reigned supreme over the battlefield until it met its match in the Supermarine Spitfire. As the war progressed and new Allied fighters such as the Soviet Yak-3 and U.S. North American P-51 were introduced, it became increasingly difficult for the Bf 109 to compete on equal terms. Nevertheless, in the hands of a capable pilot it remained a dangerous weapon until the end of the war. Versions of the Bf 109 were produced in Czechoslovakia and Spain, and it fought again in the 1948 Israeli War of Independence.

Although it was the favorite mount of many top German aces, Allied pilots who flew test versions had mixed feelings. The cockpit was cramped, with visibility limited by the heavy frames of the canopy. By Allied standards, the control harmony was poor, a problem that was amplified by the inexplicable lack of a rudder-trimming device. At cruising speeds, the Bf 109 was generally considered delightful to fly, but its controls became very heavy as speed increased. The most notorious aspect of the Bf 109 was its appalling takeoff characteristics. An estimated 3,000 aircraft were lost during takeoffs in which the pilot lost control. Landing characteristics were also challenging, but a skilled pilot could land in a relatively short distance, using heavy braking once the tailwheel was firmly planted on the ground.