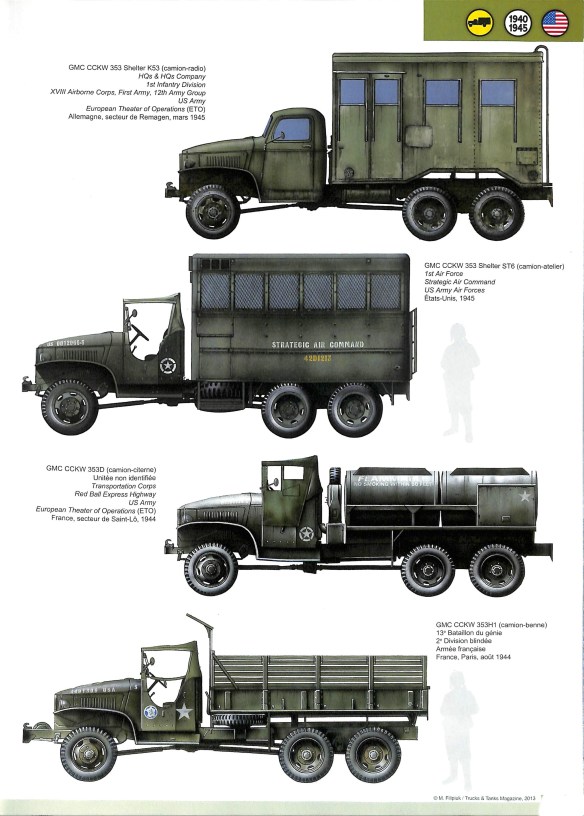 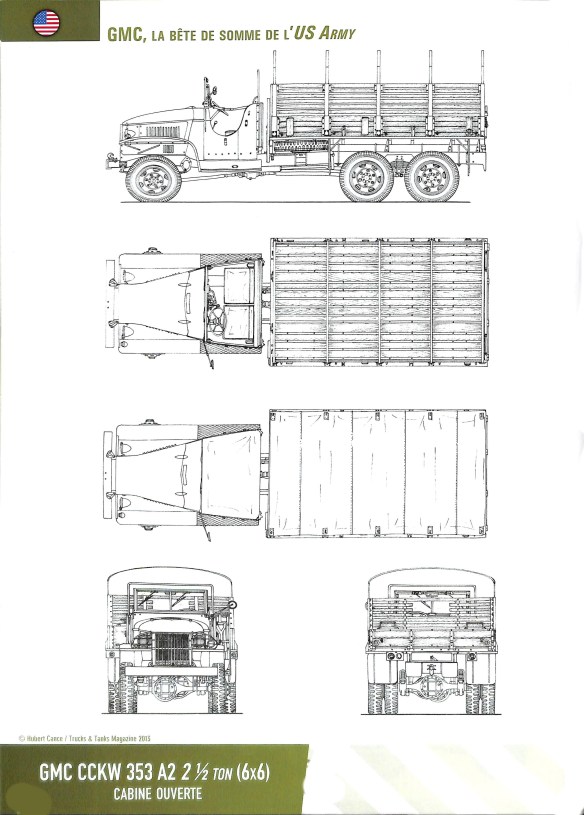 WWII for the US was the first completely mechanized war.  There were tanks, jeeps, tanks, armored cars, tank destroyers, halftracks, and trucks that were used by the US military.  They came in all sizes from the 1/4 ton 4×4 Jeep to the 10 ton wreckers.  But there is one truck that comes to a person’s mind when thinking or thinking of a trucks from WWII, and it is the GMC 2-1/2 ton 6X6.  It is the definitive truck of WWII!

When one thinks of US military medium trucks, the GMC 2 1/2-ton 6×6 immediately springs to mind.

The trucks used in this convoy system were CCKW, built by GMC, and known by the troops as either the `Deuce-and-a-half’ or the `Jimmy’. They were capable of carrying payloads of up to 2.5 tons but in reality many were greatly overloaded due to the emergencies during battle. All could tow trailers and some were also developed for specialist roles such as the 750-gallon capacity fuel tanker and 700-gallon capacity water tanker, while others were converted to be used in bomb disposal, as medical support vehicles and fire trucks; the famous DUKW (`Duck’) amphibious truck was also developed from the CCKW design. There were two basic types of these 6×6 trucks, the Short Wheel Base 352 and the Long Wheel Base 353 and either the closed cab or open cab versions. The CCKW lettering designated the year 1941 (C), conventional cab (C), all-wheel drive (K) and tandem rear axles (K). The basic version weighed 5.3 tons and measured 21.36ft long, 7.35ft wide and 9.19ft high. Between 1941 and 1945 General Motors produced over 562,000 of these trucks and other manufacturers took the production figure to more than 812,000 vehicles. The Jimmy was fitted with a GMC six-cylinder 269 cid 91.5hp engine, which gave road speeds of up to 45mph. It was thirsty on fuel and a 40-gallon fuel capacity would allow an operational range of 300 miles (7.5 miles to the gallon). Some Jimmys had provision for a .50in-calibre machine gun to be mounted above the cab roof for use in self-defence in case of attack.

Semi-trailer tractors come into this category with designations from 2 1/2ton to 5-ton. These special-purpose vehicles were used to haul large trailers of all descriptions. The general service bodies were used in great numbers during the advance across Europe, proving extremely useful in such organized deployments as the ‘Red Ball Express’ route. Starting with some of the less publicized vehicles, the AutocarModelU4144T 4×4 tractor was basically used in the USA, very few crossing the Atlantic and the US Army Air Force being a major user for the fuel bowser-towing role. Another early model, the GMC AFKX-502-8E COE tractor, was used to tow early horse box trailers for the cavalry. The GMC was powered by a 6-cylmder 91-kW (122-bhp) engine. Perhaps the two most popular and publicized tractors were the Autocar Model U7144T and the Federal 94×93, which were used in quite large numbers for haulage. The Autocar was used by artillery units to tow van bodies, fitted out with radio equipment mostly for use by antiaircraft units. These trailers were designed to use a front dolly wheel for use as full towing trailer, though when the trailer was coupled to the tractor the dolly could be towed behind the whole assembly. Early vehicles had fixed steel cabs, these later being changed to soft tops in line with most other American-produced military transport vehicles. Many soft-top vehicles were fitted with a ring mount for a 12.7-mm (0.5-in) machine-gun. The Studebaker produced almost 200,000 2 1/2-ton trucks, similar to the GMC 6×6, but more than half of that production went to the Soviet Union under Lend-lease. Many were produced with the Studebaker commercial-type closed cab. 100 Federal model was used in the same basic way, the power unit for this type being the Hercules 6-cylinder RXC engine.

In the 4-ton cargo range the FWD HARI saw extensive service with American, British and Canadian forces. It was powered by a Waukesha GB2 6-cylinder engine. Many of the trucks were instrumental in hauling supplies along the Allied supply line from Persia to the USSR. One interesting deployment of the FWD in British service was its use to tow mobile smoke generators. The RAF used the truck as mobile power supply vehicles and as snow ploughs, the latter being fitted with a Bros rotary plough, for which the rear body was replaced by a large Climax R6 petrol engine unit. Transmission of power to the plough was twofold, first by V-belts to the rotary parts then through transmission shafts to the rotor assembly with a chain drive for final power to the rake.

Diamond T supplied a 6×6 medium truck, the Diamond T 968, this being one of the US Army’s cargo trucks until the end of the war. Variants included tipper, map reproduction, wrecker and bitumen tank vehicles. A total of 10,551 was built, and a further 2,197 were supplied as long- and short-wheelbase vehicles (cab and chassis) for fitment of special engineering bodies. These were supplied to many other countries during and after World War II.

2 thoughts on “WWII US Army Trucks”