The Handley Page O/100 biplane was the first true heavy bomber manufactured by the British. Specifically designed for the purpose of bombing Germany, an order for forty aircraft was placed while the design was still on the drawing board. On 1 January 1917, four new O/100 bombers took off for delivery to France. Unfortunately, one of the new bombers was captured by the Germans when its pilot inadvertently landed at an enemy aerodrome. 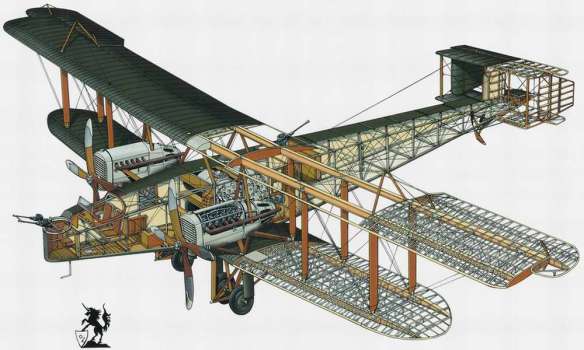 The O/400 was Britain’s first strategic bomber and, for many months, the largest aircraft assembled on the British Isles. It flew successful missions over Germany and also dropped the largest Allied bombs of the war.

Sir Frederick Handley Page established the first English factory solely dedicated to manufacturing airplanes in 1909. Six years later, the Admiralty issued specifications for a large two-engine patrol-bomber, which they deemed “a bloody paralyzer.” In the spring of 1916, Handley Page responded with his model O/100. This giant craft was a three-bay biplane and powered by two tractor engines mounted in nacelles between the wings. The long, boxy fuselage was of conventional construction but featured a large biplane tail section. The craft was also unique for its time in that bombs were carried in a rudimentary bomb bay. That summer the O/100 entered production, with 42 being built. The Royal Navy initially employed them for maritime reconnaissance, but losses forced them to switch to nighttime bombing.

In the spring of 1917 a more refined version, the O/400, was introduced. This differed mainly in possessing more powerful engines and a fuel system that was relocated from the nacelles to the fuselage. This version was issued to the RAF’s Independent Force and equipped its very first strategic bomber units. In response to the various Gotha raids over London, the Air Board ordered the O/400s to hit back at the German mainland. On the evening of August 25, 1918, two machines from No. 215 Squadron did exactly that by staging a successful low-altitude (200 feet) raid that severely damaged a chemical factory in Mannheim.

Commencing that September, O/400s were dispatched over German targets in groups of 40 or so, both at day and night, with good effect. Some of these aircraft unloaded a 1,650-pound bomb—England’s biggest—on industrial targets in the Rhineland. By the time of the Armistice, 440 O/400s had been manufactured and were being supplanted by an even bigger craft, the V/1500. Both were replaced in turn by Vickers Vimys during the 1920s.

Variant of the O/7 for mixed passenger/cargo use, two passengers up front and three in the very rear, with a freight in between; three conversions.