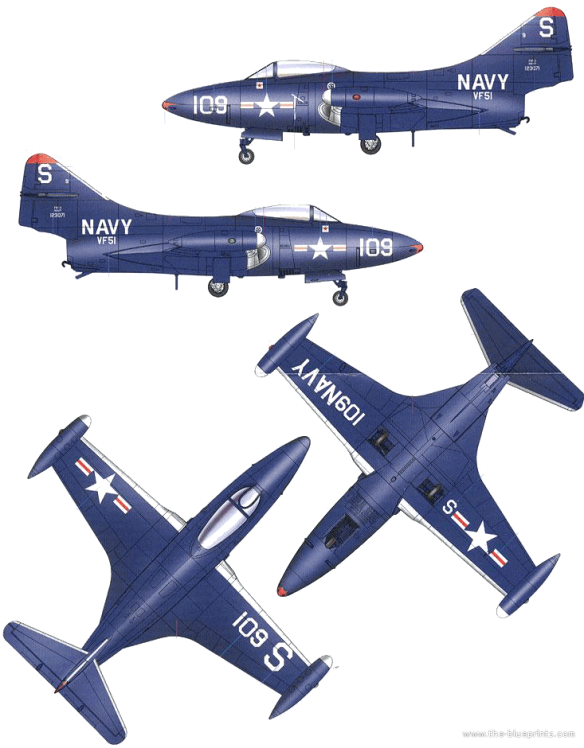 The rugged Panther was the first Navy jet committed to combat in Korea. It distinguished itself as a fighter-bomber and even shot down an advanced MiG15 fighter.

In 1946 Grumman submitted a proposal to the Navy to construct its first jet-powered fighter. The original design consisted of four low-powered engines in a relatively thick wing, but by 1947 this was discarded in favor of a more conventional single-engine approach. In November of that year the prototype XF9F was successfully flown as a midwing design with unswept wings. Jet intakes were mounted at the wing roots, and the exhaust passed through a single tailpipe under the rudder. It was highly maneuverable and relatively fast for the time, so in 1949 it became operational as the F9F. Consistent with the Grumman tradition for endowing its fighters with feline names, the craft was dubbed Panther.

Actually, two versions were built. The F9F2 was powered by a troublesome but high-powered British Rolls Royce Nene engine, whereas the F9F3 had a lower-thrust Allison J33. When the bugs were finally worked out of the Nene engine, it was clearly the better performer; all F9F3s were then retrofitted with the British engine. In service, the Panther had fine characteristics for carrier operations, for it could take off in only 800 feet, and landing speeds were less than 100 miles per hour. In 1949 it also became the first jet to equip the famous Blue Angels flying team. Ultimately, the Navy accepted 1,382 of these machines.

When the Korean War commenced in 1950, F9Fs became the first Navy jet committed to combat. Flying from the carrier USS Philippine Sea that August, they commenced a distinguished career as hard-hitting fighter-bombers. On November 9, 1951, an F9F shot down a superior Soviet-built MiG15 fighter while dogfighting.

F9F-2s, F9F-3s and F9F-5s served with distinction in the Korean War, mainly as attack aircraft, showing noticeable resistance to anti-aircraft fire; despite their relative slow speed, they also managed in downing two Yak-9s and five Mikoyan-Gurevich MiG-15s for the loss of two F9Fs. On 3 July 1950, Lieutenant, junior grade Leonard H. Plog of U.S. Navy’s VF-51 flying an F9F-3 scored the first U.S. Navy air victory of the war by shooting down a Yak-9. The first MiG-15 downed was on 9 November 1950 by U.S. Navy Lieutenant Commander William (Bill) Amen of VF-111 “Sundowners” Squadron flying an F9F-2B. Two more were downed on 18 November 1950, and the other two were downed on 18 November 1952. The type was the primary Navy and USMC jet fighter and ground-attack aircraft in the Korean War. Future astronaut Neil Armstrong flew the F9F extensively during the war, even ejecting from one of the aircraft when it was brought down by a wire strung across a valley. Future astronaut John Glenn and Boston Red Sox All Star Ted Williams also flew the F9F as Marine Corps pilots.

The Panther continued rendering excellent service until 1957, when it gave rise to the new, sweptwing F9F Cougar.

Version fitted with underwing racks for bombs and rockets. All F9F-2s were eventually so modified, and the B designation was dropped.

Allison J33 powered version produced as insurance against the failure of the J42, 54 built. All converted to J42 power later.

Prototype used in the development of the F9F-4.

Version with longer fuselage with greater fuel load and powered by J33 engine. Most re-engined with J42s. F9F-4s were the first aircraft to successfully employ blown air, extracted from between the engine’s compressor and combustion chambers, to energize the slot flaps, thus achieving a decrease in stalling speed of 9 kn for takeoff and 7 kn on power approach for landing.

After the F9F Panther was withdrawn operational service, a number of F9F-5s were converted into unmanned target drone aircraft.

Hardpoints: Underwing hardpoints and provisions to carry combinations of: