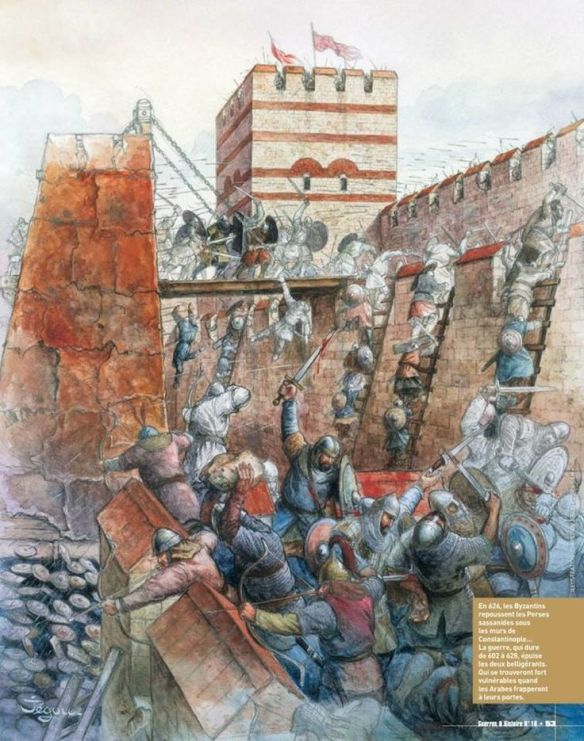 Avar khagan Haganos laid siege to the city, an advance guard of some 30,000 men forced the Byzantine army guarding the wall to fall back to the protection of the Theodosian Walls. 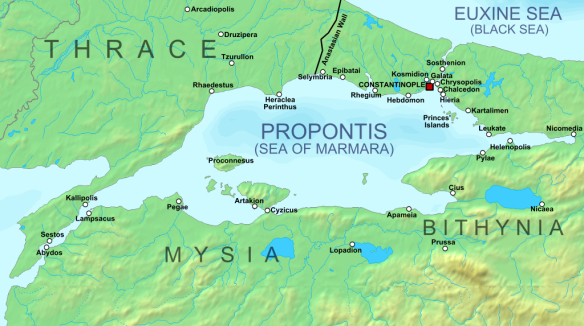 Very important events took place in the Balkan Peninsula after the death of Justinian, although unfortunately present knowledge of them is limited by the fragmentary material that appears in the sources. During Justinian’s reign the Slavs frequently attacked the provinces of the Balkan Peninsula, penetrating far into the south and threatening at times even the city of Thessalonica. These irruptions continued after Justinian’s death. There were then large numbers of Slavs remaining in the Byzantine provinces, and they gradually occupied the peninsula. They were aided in their aggression by the Avars, a people of Turkish origin living at that time in Pannonia. The Slavs and Avars menaced the capital and the shores of the Sea of Marmora and the Aegean, and penetrated into Greece as far as the Peloponnesus. The rumor of these invasions spread to Egypt, where John, bishop of Nikiu, wrote in the seventh century, during the reign of the Emperor Phocas: “It is recounted that the kings of this epoch had by means of the barbarians and the foreign nations and the Illyrians devastated Christian cities and carried off their inhabitants captive, and that no city escaped save Thessalonica only; for its walls were strong, and through the help of God the nations were unable to get possession of it.” A German scholar of the early nineteenth century held the theory, discussed at length later, that at the end of the sixth century the Greeks were completely destroyed by the Slavs. Studies of the problem of Slavic settlement in the Balkan Peninsula depend greatly upon the Acts of the martyr Demetrius, the protector of Thessalonica, one of the main Slavonic centers in the peninsula.

At the end of the sixth and the beginning of the seventh century the persistent southward movement of the Slavs and Avars, which Byzantine troops were unable to stop, produced a profound ethnographic change in the peninsula, since it became occupied largely by Slavonic settlers. The writers of this period were, in general, poorly acquainted with the northern tribes and they confuse the Slavs and Avars because they attacked the Empire jointly.

The Avars were probably the amalgamated remnants of the Juan-juan with those of the White Huns after both were driven west by the Oak Turks. They conquered the Kutrigur and Utigur remnants of Attila’s Huns, now mixed with the Sabir and Onogur and calling themselves Bulgars, the Gepids and many of the Southern Slavs, incorporating them into their army and sending them to lead the attack! After their failed attack on Constantinople in 626, the Avars lost face and were deserted by many of their subjects The Bulgars revolted in 631, but some became allied again from 675 until eastern Avarria was attacked by Krum’s Bulgarian empire in 805. The Avars are described by Maurikios as dishonest, cunning and very experienced in military matters, preferring to win not so much by force as by deceit and surprise He says that unlike other nomads “they concern themselves with military organisation, and this makes them more powerful in pitched battles”, which suggests regular status. Maurikios says that they wore armour and most were double-armed with both lance and bow, the horses of the most important also being totally armoured There is no evidence for shields They often used more than three commands and separated them widely Their baggage consisted of tents and vast horse herds. They did not use wagon laagers.

While the Emperor was absent leading the army in distant campaigns, the capital became exposed to very serious danger. The Khagan of the Avars broke the agreement with the Emperor and in the year 626 advanced toward Constantinople with huge hordes of Avars and Slavs. He also formed an agreement with the Persians, who immediately sent part of their army to Chalcedon. The Avaro-Slavonic hordes besieged Constantinople to the extreme apprehension of the population, but the garrison of Constantinople was successful in repelling the attack and putting the enemy to flight.

The extent to which siege towers were employed remains unclear. They appear in several sixth-century accounts of siege machinery (for example, the Roman siege of Amida in 503, the Persian siege of Martyropolis in 530, and Belisarius’ siege of Rome). Twelve such towers are reported to have been constructed by the Avar besiegers of Constantinople in 626, and they appear again at the Avaro-Slav siege of Thessaloniki in the period 616-18.

As soon as the Persians heard of this repulse, they withdrew their army from Chalcedon and directed it to Syria. The Byzantine victory over the Avars before Constantinople in 626 was one of the main causes of the weakening of the wild Avar kingdom.