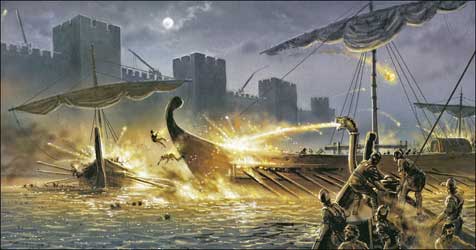 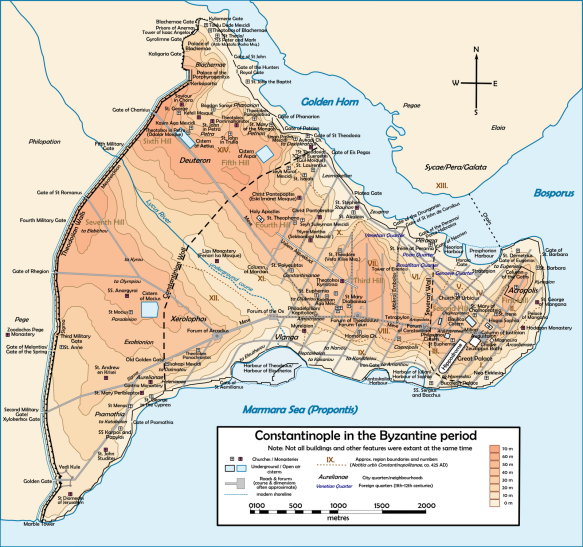 Location: on the Sea of Marmara, modern Istanbul.

Defeat of Muslim forces in their first serious attempt to overpower the Byzantine Empire led to another seven centuries of Christian power in southeastern Europe.

Constantine the Great established the city of Constantinople as his capital in 323. In doing so, he occupied the former city of Byzantium, which for centuries had controlled the straits separating Asia and Europe. The Sea of Marmara is flanked northeast and southwest by the Bosphorus and the Dardanelles, two narrow straits linking the Mediterranean and the Black seas. Unless one goes completely around the Black Sea, the passage from Europe into Asia Minor is across one of those straits. Therefore, Byzantium/Constantinople/Istanbul has been an extremely strategic possession for both land and naval warfare, as well as overland and maritime trade. As Rome faded and Constantinople rose in power, it became the seat of the Eastern Roman, or Byzantine, Empire.

Muhammad the Prophet founded Islam in Arabia in the seventh century. Claiming his divinely inspired teachings, the Koran, to be the successor to the Bible and the fulfillment of God’s plan for humanity, he spread his faith by both proselytization and warfare. By coincidence (or divine intervention) Muhammad arrived on the scene just as the two Middle Eastern powers, Persia and the Byzantine Empire, had fought each other to an exhausted standstill. He was therefore able to acquire massive territorial gains hand in hand with the spread of his faith. Both Persians and Byzantines suffered major losses of real estate as well as major losses of converts to Islam, who found it less oppressive than the ultraconservative Orthodox Church.

Muhammad the Prophet had a public career of ten years (622–632), then died without publicly naming a successor. His close associate Abu Bakr was elected to succeed him but ruled only two years; upon his death Omar reigned as caliph (“deputy”), the religious and political head of Islam. For ten years Omar oversaw Islam’s expansion into Byzantine territory, Persia, Syria, modern Iraq, and Egypt. It spread further still under the caliphate of Othman (644–656), ultimately stretching west to the Atlantic shore of North Africa as well as east to Armenia and Afghanistan. After he was assassinated Islam split into two major factions: the followers of Muhammad’s nephew Ali became the Shi’ites, while the supporters of the Syrian governor Muawiya started the Sunni faction. Muawiya established the Umayyad dynasty, which ruled from Damascus between 661 and 750.

Muawiya’s goal was the downfall of the Christian Byzantine Empire, for reportedly whoever was involved in capture of the capital city of Constantinople would have all his sins forgiven. Intermittently between 674 and 678 Muslim forces attempted to capture the city, by both land and sea, but the double walls protecting it proved too formidable. Muawiya settled for a peace treaty with the Byzantine emperor, which provided for an annual tribute from Damascus to Constantinople. For the next thirty years Muslim armies carried the faith as far as Spain and India, but the lure of Constantinople, the key to Europe, always beckoned. Caliph Walid (705–715) organized the forces necessary to seize the city, but died before the project began. Thus, his successor Suleiman sent men and ships to the Byzantine capital in 717.

The Byzantine Empire had suffered through a series of mediocre emperors since the last assault. Anastasius was now emperor. He came to the throne in 713 and was in the market for able soldiers to defend his realm. In his army served a general named Conon, better known as Leo the Isaurian. (He was probably from Syria rather than the Anatolian province of Isauria [modern Konia], however.) He had been a soldier since 705 and in 716 took command of the theme (district) of Anatolia. He harried the approaching Muslim army as it marched out of Syria toward Constantinople, then took the throne from Anastasius in March 717. Crowned Leo III, he immediately set about laying in as many provisions as he could for the siege he knew was coming, a daunting task for a city of perhaps half a million people. He also oversaw the repair and strengthening of the city’s two walls and the placement of weaponry to repel attacks from land or sea.

Caliph Suleiman named Muslama as commander of his army, reportedly 80,000 men marching through Anatolia toward Constantinople. His plan was to invest the city from the western, landward side while a huge fleet blocked any supplies from reaching the city. That fleet numbered some 1,800 ships carrying a further 80,000 men under the command of a general named Suleiman, not to be confused with the caliph. The Muslim fleet was divided into two divisions: one to blockade the Dardanelles (or Hellespont) and keep any relief from coming to Constantinople from the Mediterranean, and one to hold the Bosphorus to the north, keeping out any relief from Black Sea ports. Muslama crossed the Hellespont in July 717, then divided his forces. He took command of the main body that began the siege, while sending a detachment to Adrianople to keep an eye on the Bulgars, who had been pillaging through southeastern Europe and had attacked Constantinople in 712.

Immediately upon his arrival Muslama threw an attack against the walls, but it was easily beaten back. That convinced him against undertaking a frontal assault, so he began digging trenches to prevent any breakout from the city. Most of the fighting, therefore, took place on the water. Admiral Suleiman left part of his navy at the Dardanelles, as ordered, but led the remainder northward to take up station on the Hellespont. As they approached Constantinople, however, the leading ships were caught in a swift and unfamiliar current that began to tangle them. Seizing his opportunity, Leo quickly lowered the chain that protected the Golden Horn (the upper harbor of the city) and dashed out into the Muslim fleet before they could form into line of battle. Using Greek fire, his ships quickly destroyed or captured a large number of vessels while the rest retreated. Suleiman feared sailing past the city now, for another such battle could destroy the rest of his fleet. Thus, the northern avenue for aid for a time was kept open.

The Muslim effort was off to a poor start, and soon bad news came from Damascus. Caliph Suleiman had died of a stomach ailment (probably from overeating) and Omar II, not known for his military acumen, had replaced him. For the next several months little happened except for bad luck. The winter of 717–718 was much colder than usual and snow lay on the ground for more than three months. For an army born and raised in Arabia and Egypt this was disconcerting at best, deadly at worst. Delays in the delivery of supplies from Egypt, coupled with the bad weather, meant the deaths of thousands of besieging soldiers.

The Muslims hoped to take the initiative in the spring of 718 with the arrival of a new fleet from Egypt bringing 50,000 reinforcements. The 400 ships of the fleet from Egypt slipped past the Byzantine fleet in the Golden Horn at night, thus avoiding a naval battle, and anchored at the Hellespont. That cut off the flow of supplies and would eventually have spelled the city’s doom, but Leo’s navy again saved the day. He was aided by the desertion of large numbers of crew members from the new Egyptian fleet, sailors who were Coptic Christians and had been pressed into Muslim service. Learning of the enemy fleet’s disposition, Leo launched a surprise attack in June that caught them completely unawares. The Greek fire (an unknown mixture of materials with many of the characteristics of napalm) once again caused both destruction and terror; the Christian crews deserted wholesale to the welcoming Byzantine forces. The northern blockading fleet was destroyed and Leo followed up his victory with an attack on Muslim forces on the Asian side of the Sea of Marmara, opposite the capital. That attack was so unexpected that Muslim soldiers and sailors were slaughtered by the thousands.

Leo at this point proved himself to be a diplomat as well as a general. He sent envoys to the Bulgars, who persuaded their King Tervel to attack the Muslim army from the west. In July Tervel’s soldiers drove back the Muslim holding force at Adrianople and attacked Muslama’s forces in the rear, defeating them and inflicting some 22,000 casualties. This new threat was reinforced by the rumor that a Frankish army was marching across Europe to assist their fellow Christians. The Muslims had not yet fought the Franks, but had heard tales of formidable military power. Caliph Omar decided it was time to bring the siege to a close. On 15 August 718 Muslama led the army away from Constantinople.

The defeat at Constantinople was the first disastrous loss the armies of Islam had suffered. There had been occasional defeats, but never a catastrophe such as this. Of the 210,000 Muslim soldiers and sailors who took part, it is reported that only 30,000 actually saw their homeland again. Of the more than 2,000 ships reported to have been involved, only five supposedly made it home.

Had Muslama’s armies captured the city, the route into eastern Europe would have been virtually unguarded. Little organized resistance could have been mounted against hordes of Muslim troops until they reached central Europe. Constantinople, the seat of political, religious, and economic power in the Christian East, probably would have become Islam’s capital as it did in the wake of the Muslim capture of the city in 1453. The Eastern Orthodox Church may have disappeared, with untold consequences in eastern Europe and Russia, although such did not happen in 1453. Sea power would have been completely in Muslim hands, for no European population at the time owned a significant navy. None would until the Vikings a century later. Even with the Frankish victory at Tours in France fifteen years afterward, Islam could well have become the dominant European, and therefore world, religion.

The Byzantine victory insulated Europe from Islam, but also from other outside influences. Hellenistic knowledge and culture survived and in many ways flourished in the Middle East and Africa, while Europe entered the Dark Ages. Militarily Europe was strong, but cultural progress was at a crawl. Not until the Crusades and the resulting revival of trade with the East was the old knowledge rediscovered, and the Renaissance was the result. It is interesting to speculate what Europe may have been like had Constantinople fallen seven centuries before it did.