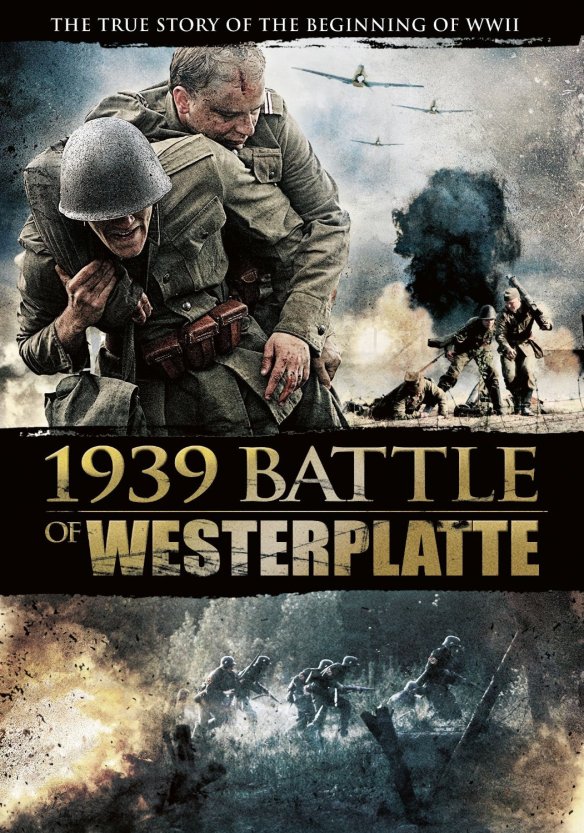 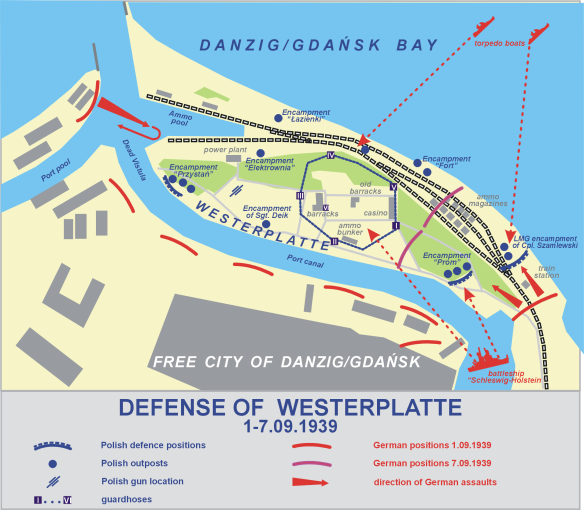 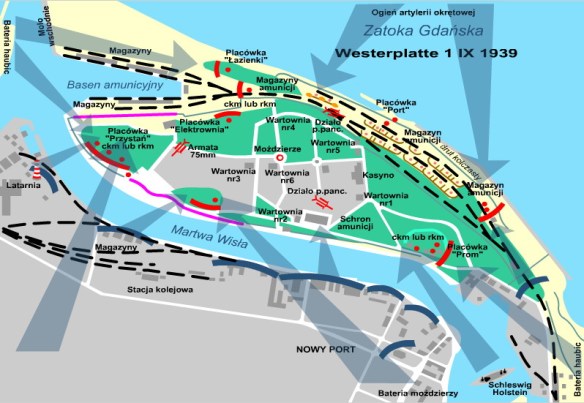 The Westerplatte was a low, mostly wooded, long peninsula with a length of around 2,000m and a maximum width of 600m.

At the beginning of the 19th Century, the Poles and French secured the Westerplatte for defence against the advancing Russians. Shortly before World War I, Germany built a defence position on the seaward side. The rest of these defence works were used in 1939 by the Poles in the newly created defence system.

The Westerplatte was a favoured bathing and outing place before World War I because of its excellent beaches. When the Poles took over the Westerplatte in the 20s, the Danzig population was denied access. By the decision of the League of Nations on 14th March 1924, referred to in Para. 2 of the Province Agreement between Danzig and Poland on 4th August 1924, the Westerplatte was provided to the Polish government exclusively as a storage place for war equipment. Through this it developed into a military transit camp with a guard detachment established by the League of Nations at 88 men (2 officers, 20 NCOs and 66 men). In a bilateral agreement between Danzig and Poland, it was ruled that Danzig could maintain two policemen for general surveillance at the entrance to the Westerplatte.

After Hitler’s take-over of power the Poles began to work on a defence plan and preparations in the case that Germany tried to take the Westerplatte by surprise from Danzig or East Prussia. They began to reinforce the already secure Westerplatte for military defence. The Poles considered an attack carried out from the promontory as especially dangerous. An all-round defence of the peninsula was planned, with the emphasis on the promontory. Three guard houses formed a semicircular defence line to the south. To the north the ring was closed with a further guard house and another building which was already there, the NCO quarters. The four reinforced guard houses were barns made of brick and cement with the dimensions seven by seven metres. The walls and floors [were] between 45 and 60 cm thick, with the thickest at the cellar levels. In the cellars were between one and three machine gun positions, the embrasures of which were at ground level. The NCO quarters were just like the barracks, reinforced with cement for defence. Since the Westerplatte officially could not be militarily reinforced, heavy weapons were certainly lacking. These were brought onto the peninsula by Polish railway officials under hay and other materials in goods trains. It was more difficult for Poland to strengthen the 88-man garrison. They had already tried it once, but were persuaded by the League of Nations to reduce it to the lawful strength. They carried out the strengthening of the regular garrison in this way: if the Polish soldiers had an outing, they would be taken in uniform by tug to Gdingen. The head count would be noted by both German policemen. In the evening they would return again and have their number checked by the policemen. Now however there were some civilian workers in uniform mixed in with the regular soldiers who were exchanged for further soldiers in Gdingen. From Gdingen the officials from the Westerplatte, again in civvies, drove back to their private flats in Danzig, and went to work the next morning on the Westerplatte as usual, while the regular soldiers returned with the reinforcements. The head count had not changed. So the total strength of the garrison slowly increased to 210 soldiers, without Danzig noticing a thing. The civil workers were, like the public employees of the Polish Post Office in Danzig, specially trained and reliable reserve NCOs of the Polish army. The field gun stood in a protected position in the garage of the barracks. West of there, on the edge of the forest, a camouflaged defence post had been prepared, from where above all the harbour canal could be shelled. The initial position of the four mortars was to the north east of the barracks. Both anti-tank guns were to cover the promontory. Both guns were brought rather far back, one to the north by the railway line, the other south with a field of fire which covered the road to the Westerplatte. A brick protective wall was erected to the west and south.

The preparations for a lightning conquest of the Westerplatte were made by the Kriegsmarine, although really the seizure was to be achieved by the Danzig units. In a conversation between the Captain of the Schleswig-Holstein and the Commander of the Danzig units, the latter made clear that he had never planned to take the Westerplatte. He was only to have blockaded the garrison there and prevented them from getting onto the land. They agreed on this, that the shock company specially trained for landing operations in the III Marine Artillery Detachment should take the Westerplatte by surprise. This shows how lacking in co-ordination were the attempts at collaboration of the individual branches of the Wehrmacht even at the beginning of the war.

It consisted of four officers, one doctor (two others followed later) and 225 men. The garrison was Swinemünde, then shortly before deployment, Memel. They had the task of securing the Schleswig-Holstein against Polish attack in Danzig harbour and being ready for possible special missions.

On 23rd August 1939 the 1st Minesweeper Flotilla received the order to pick up the unit from Memel on 24th August 1939 at 0300 hrs and to transport them to the Schleswig- Holstein at sea by 2000 hrs. On 25th August 1939 the Schleswig-Holstein arrived in Danzig at 1044 hrs. The Marine shock company was below deck. At 1700 hrs the order came to be ready for action from 2100 hrs. At 2120 hrs, the report came in that the attack on Poland was postponed. This postponement had the advantage that the attack could be worked through again, since they had had only a little time to work on the first attack plan after the misunderstandings. The leader of the Marine shock company, Oberleutnant Henningsen, reconnoitred the Westerplatte daily, but got little information on the current defence positions. On 28th August 1939 Kleikamp revealed the tactical orders and missions of the ship as Captain of the Schleswig-Holstein.

It was made clear however that the taking of the Westerplatte was a precondition for the achievement of the mission.

On the next day a radio message came to the Schleswig-Holstein at 1835 hrs that the attack on the Poles should begin at 0445 hrs on 1st September 1939. At 2330 hrs the Marine unit and an additional MG platoon formed from members of the garrison began to disembark. At 0447 the order for the Schleswig-Holstein to fire was given: the Second World War had begun! After shells had blasted holes in the wall which surrounded the Westerplatte, the shock company attacked at 0456 hrs disposed as follows: From left to right, from the south of the promontory: The 1st infantry platoon, the 2nd sapper platoon, the 2nd infantry platoon. At a distance of 100 m a heavy machine gun followed the 1st infantry platoon and a c/30 machine gun followed the sapper platoon (total of 150 men). Both infantry platoons were to storm through the breaches, the sapper platoon was to storm the railway gate in the Westerplatte [that] they were to blow up.

These three groups did not, however, succeed in penetrating far into this sector. The attack stalled with heavy losses in dead and wounded. At 0622 hrs, the company announced that the losses were too great; therefore they would retreat. Meanwhile, the 3rd Platoon of the 13th Coy., SS-Heimwehr Danzig was added as a reinforcement. Its initial position was on the far right next to the 2nd Infantry platoon. At 0855 hrs the second attack began. The already heavily decimated platoons advanced under heavy defensive fire. The platoon of SS-Heimwehr Danzig lost contact with the others and retreated at 1040 hrs. Even here the Germans were involved in battles with Polish snipers in the trees. At around 1230 hrs, the leader of the Marine unit, Henningsen was wounded and died the next day. Oberleutnant Schug took over the company. Since the Poles had let the Germans advance so far that they were able to shoot at them from all sides, the shock troop retreated again at 1235 hrs. Kleikamp believed now that occupation of the Westerplatte would not be accomplished in this way, and demanded Luftwaffe support. Although at the start Hitler had ordered that the Westerplatte be taken by the 2nd of September at the latest, for prestige reasons, he ordered more careful planning from the unit, to avoid even more losses. The shock company had suffered 50% losses already. On 2nd September 1939, the II and III Wings of the Sturzkampfgeschwader Immelmann made several attacks on the Westerplatte. During this they destroyed the Polish communications network, both among the Poles on the Westerplatte and all contact with the other units. Since almost all of the shock company’s machine guns were lost, an MG troop consisting of 45 men from the crew of the Schleswig-Holstein was put into service. Kleikamp and Schug were of the opinion that a new attack must be better prepared, because the strength and weaponry of the Poles were not known. One tended to exaggerate their strength and come to the view that a storming of the Westerplatte would only be possible with tanks and heavy field howitzers. After a few attempts at recce patrols and the burial of the fallen on 5th September 1939, the sapper unit tried to set fire to the Westerplatte wood on the next day. A train carriage filled with benzol was put on the Westerplatte. However, the railway officials uncoupled too early, so the carriage soon came to a standstill and did not reach the wood. The SS-Heimwehr bombarded the Westerplatte on 6th September 1939 from 0900 hrs until 1100 hrs with Minenwerfers and in the afternoon with infantry guns. At 1545 hrs, a new attempt was made to set the wood alight. This failed too. After just 20 minutes, the fire was extinguished again. On 7th September 1939 the Marine shock company made a new attack with the aid of one platoon of SS-Heimwehr Danzig and three platoons of the Danzig Landespolizei. The soldiers advanced without meeting any real resistance and at 0945 hrs saw the first white flags. After their capture, the Poles all stated that they had been demoralised by the shelling from the Schleswig-Holstein on 1st September 1939 and the bombardment by the Luftwaffe on 2nd September 1939. There was even talk on those days of capitulation. Since the next attack only followed on 5th September 1939, they had time to recover and reorganise. A decisive German attack on 3rd September 1939 would surely have forced them to surrender.

On Friday, 8th September 1939, the OKW reported: “Yesterday, the operations in Poland took the form of a pursuit in many areas; serious battles only happened in isolated places… The garrison of the Westerplatte in Danzig has surrendered, its resistance broken by sapper and Marine shock companies and SS-Heimwehr with the co-operation of the Schleswig-Holstein.

In all, some 40-60 Junkers Ju 87 Stuka bombers and seven other aircraft (Heinkel He 51 and Junkers Ju 52) were involved in the siege of Westerplatte.

By August 1939, the garrison of Westerplatte had increased to 182 soldiers and 27 civilian reservists conscripted into service after the breakout of hostilities.

The WST was armed with one 76.2 mm wz. 02 field gun, two Bofors 37 mm wz. 36 anti-tank guns, and four Stokes-Brandt 81 mm wz. 31 medium mortars. The strong side of the garrison was a disproportionately large number of machine guns at their disposal (41 machine guns, including 16 heavy machine guns). They had also 160 rifles, 40 pistols and over 1,000 hand grenades.

1 thought on “Battle of Westerplatte”