Waffen SS “Wiking” Kampfgruppe “Darges” with the commander of the Hungarian forces at the entrance of the Mountain Castle 8th of January 1945. 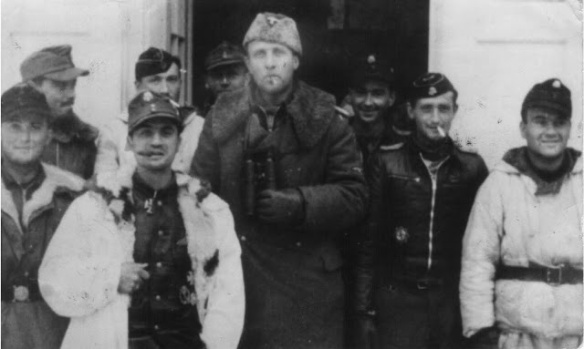 While the Resistance cut down the Far Right on the home front, the Red Army was completing the task against their Waffen-SS counterparts on the battlefront. November and December had seen Hungary invaded and Budapest surrounded. Some 95,000 German and Hungarian troops ended up trapped in the city, with the core of the defence based on the cavalrymen of the 8th SS-Cavalry Division Florian Geyer and the 22nd SS-Volunteer Cavalry Division Maria Theresia. Hitler was obsessed with holding the capital and the Hungarian oilfields, which were the Third Reich’s last major supplier of fuel. No matter that his entire ‘Fortress’ and ‘hold to the last man’ strategies had proved themselves to be utter failures and that the oilfields in question could not even provide Army Group South’s needs let alone anyone else’s. As ever, Hitler refused to accept reality and the Ostheer was ordered to expend its last strength in vain attempts to relieve Budapest and defeat the Soviets on the Magyar plains in a series of operations codenamed Konrad (there were to be three in the end). Involved from the start was the Wiking, which was dispatched south from Poland along with the Totenkopf, and sent straight into the attack from its transport trains on New Year’s Day.

Advancing from Komarno, the Germans main base in western Hungary, the two panzer divisions surprised the 4th Guards Army and threw it back some 20 miles. But the Russians swiftly got over their initial shock and poured fresh forces into the struggle. The offensive slowed and casualties mounted. Unwilling to concede defeat, Hitler pulled Gille’s Corps back and moved them near Szekesfehervar to try again. With Hans Dorr’s Germania in the lead, the Wiking attacked again. Scandinavian grenadiers fell to mines, artillery fire and even electrified wires as their ranks were further thinned. But somehow they carried on, the Wiking’s King Tigers (an armoured monster that weighed 68 tonnes and sported the superlative 88mm gun as its main armament), creating carnage among the Soviet tank ranks as the division advanced to within a mere 12 miles of the centre of Budapest. The garrison, desperately battling for their survival among the smoking ruins of the once-beautiful city, could hear the rumble of the guns as the Wiking edged forward – surely they would be saved. Then disaster struck.

Dorr called a briefing for his officers in a barn in the just-captured village of Sarosd. A lone Soviet anti-tank gun and its crew had been overlooked by the assaulting troops and had kept their heads down. Sensing an opportunity, the gun commander saw the SS officers gathering in the barn near the square and ordered his gunner to hit it. With the trademark retort that gave the Soviet 76mm gun its nickname among the Germans of the ratschbum, the high velocity shell shot across and slammed into the building’s roof showering the assembled commanders with red-hot shrapnel. At a stroke the Germania was beheaded. Dorr, a Knight’s Cross winner and Cherkassy survivor, was wounded for the sixteenth time in his brief career and would later die of his injuries. Several other men were killed instantly, and almost everyone else was wounded by the razor sharp steel fragments. The stuffing was knocked out of the Germania by the losses and the offensive ground to a shuddering halt as the Soviets threw ever-more reinforcements into a counter-attack. Within days, not only had the Germans been stopped but the Wiking itself had been surrounded.

The former Norge and Danmark 1st Battalions were heavily involved in the fighting, particularly around the town of Pettend. Fritz Vogt, now Erik Brörup’s battalion commander, personally destroyed six Soviet tanks with hand-held panzerfäuste during the fighting that claimed the lives of several Scandinavian volunteers, including the ex-DNL veteran Fritjof Røssnaes (his elder brother Knut was also in the division) and the surgeon Dr Tor Storm, allegedly burned alive with his wounded charges after trying to surrender. The two battalions did manage to break out from Pettend and rejoin the rest of the division, but the price was astronomically high. The Danmark was effectively annihilated and was never resurrected, while the Norge could muster just 36 officers and men by mid-February. The Westland’s commander, SS-Obersturmbannführer Franz Hack spoke of the ferocity of the combat:

The Soviets attacked us frontally during the day, supported by artillery and Stalin’s Organs [German nickname for the multi-barrelled Katyusha rocket launchers]. The battle raged in and around the little town of Seregelyes, and somehow we captured a complete Stalin Organ with tractor and ammunition. Our artillerymen and infantry gunners, under SS-Hauptsturmführer Peter Wollseifer, turned the multiple launcher around and soon the Soviets were getting a taste of their own medicine.