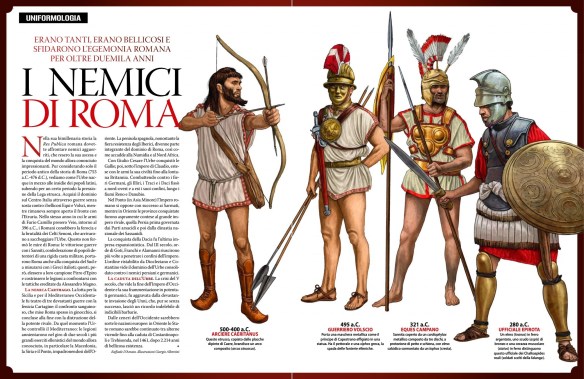 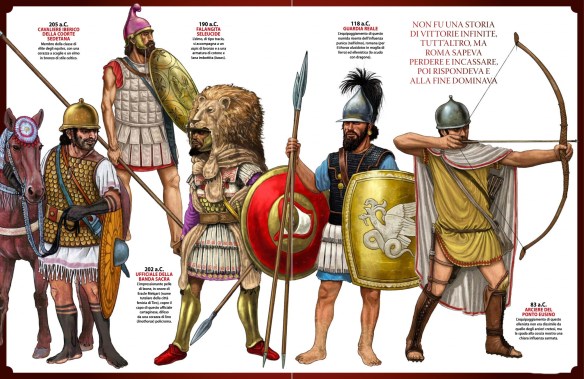 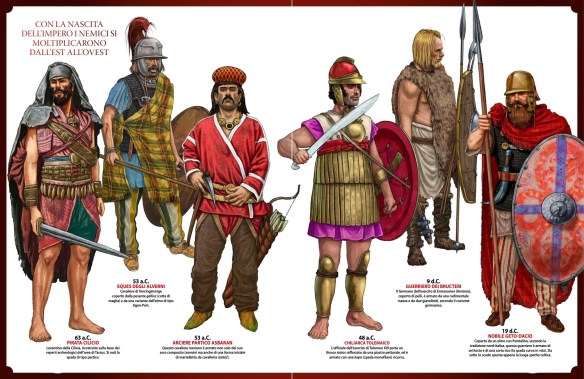 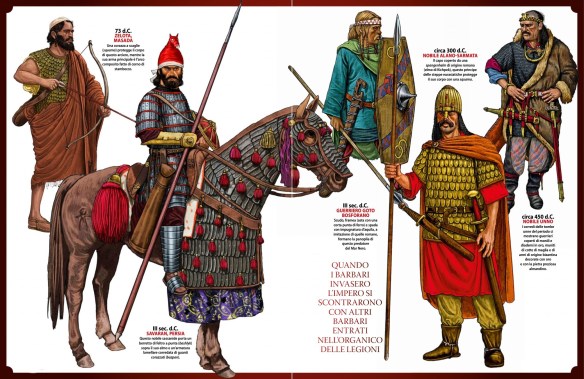 Roman external relations were defined by territorial ambitions and interests on the part of the Roman state at different stages of its development. These relations shifted during Roman history as it evolved from a republican city-state based in Italy and eventually became a vast empire encompassing three continents.

Early in the republic, most of Rome’s relations were primarily with its Latin, Italic, Greek, and Etruscan neighbors in the Italian peninsula and were focused on guaranteeing its economic health and security in the region. However, Roman military and economic expansion into Europe, the Mediterranean littoral, and the Near East brought the Roman republic (and then the empire after the principate of Augustus) into direct contact and conflict with the Celts (Gauls), the Carthaginians, the Hellenistic kingdoms, and the Parthians, thus expanding its relations from the circumscribed world of the Italian peninsula. Later in the third and fourth centuries CE, in light of its declining military and political strength, the preservation of the Roman empire rested on maintaining friendly relations and alliances with Germanic ethnic groups in its European borderlands, which were characterized by vast German migrations from central Eurasia. Early in the republic, much of Rome’s inter- action with local Italian city-states in terms of trade, alliances, and warfare centered on Roman expansion vis-a-vis these entities. Growing Ro- man preeminence in the central Italian peninsula brought it into direct conflict with other Latin city-states (collectively referred to by historians as the Latin League). Direct military confrontation between Rome and the Latin League in the Latin War ultimately resulted in Roman victory in the Battle of Lake Regillus in 499 BCE. The Latin War ended with a formal treaty (foedus Cassianus) that established normal relations between the Romans and the Latin League and created an alliance for collective security. However, this diplomatic maneuver on the part of Rome was in response to the growing threat of migrations of Volsci and Sabines into Roman and Latin areas in the fifth century. Subsequent warfare with the Volsci and the Gauls made the alliance with the Latins pivotal to Italian security. However, in the midst of the Samnite Wars (the Saminites were erstwhile allies of the Romans) the Latin League grew suspicious of Ro- man hegemony, resulting in a revolt in 340 BCE. Upon the defeat of the Latin League, Rome pursued a policy of incorporating the Latin cities through intermarriage, citizenship, and growing economic bonds, thereby securing their hegemony in Italy. By the end of the Third Samnite War in 290 BCE, they too became incorporated as part of the Roman state, as did the Etruscans and Gauls in subsequent years.

Roman diplomacy shifted onto the great Mediterranean region with the defeat over Epirus in the Pyrrhic Wars and Carthage in the Punic Wars in the third and second centuries BCE. Rome and Carthage had maintained friendly relations prior to the Punic Wars, only insofar as they saw a com- mon enemy in the Greeks and Etruscans. However, with Roman incorporation of these regions, hostility against Carthage in Sicily, Spain, and North Africa resulted in the Punic Wars. In the midst of these wars, Rome garnered support and hostility from adjacent Hellenistic states (some were Carthaginian allies), bringing them into the orbit of Roman national interests. While there were Roman emissaries and what could be construed as diplomats and diplomatic institutions in the modern sense sent or exchanged with these kingdoms, the actual work of diplomacy was done through the Roman military and bureaucracy following orders from the Senate.

In the second to first centuries BCE, small Greek kingdoms, seeking greater autonomy from the Hellenistic kingdoms (that is, the empire of Alexander the Great and his generals), sought Roman support. Roman intervention in Greek affairs brought them into dynastic intrigues and regional disputes, resulting in Roman military actions against Macedon (200 BCE-197 BCE), Syria (190 BCE), and Greek city-states (particularly illustrative with the Roman sack of Corinth in 146 BCE). Rome gradually incorporated these Greek regions as Roman provinces as they were defeated. Roman acquisition of Pergamum in Asia Minor through the will of its last monarch in 133 BCE granted them substantial territory in the East as well. While friendly relations existed with Ptolemaic Egypt, the last of the great Hellenistic kingdoms, Roman political strife combined with Mark Antony’s alliance with Cleopatra also resulted in the conquest of that region by Octavian in 30 BCE.

The Roman empire, particularly during the principate, was a potent force in the ancient Mediterranean world, bringing it into contact with the Parthians in the East and with German cultural groups along its European borderlands. As Rome expanded into Britain, the Levant, and Mesopotamia, it was expedient to rule through client-kings in a form of indirect rule. However, due to revolts such as those in Judea by the Jews (particularly the Zealots) and in Britain by the Iceni in the first century CE, Roman authority was established through the direct incorporation of these regions as Roman provinces subject to direct political and military authority. Relations with Parthia were also characterized by the establishment of formal diplomatic recognition of this Persian kingdom as an equal through the exchange of hostages during times of peace. While wars did characterize this relationship, the inability of either power to force the other to complete capitulation forced this mutual recognition. However, as Rome’s military and political power declined in the third and fourth centuries CE, Rome was forced to develop a series of alliances with neighboring Germanic tribal states along its periphery for mutual defense by allowing Germanic settlement in Roman lands, for Germanic mercenaries, known as foederati, were crucial to Roman defense. In the midst of a massive migration of Germanic peoples coming from central Eurasia and exerting pressure on Roman borderlands, it was pivotal for Rome to establish such relationships to counter its weakening military. While some of these Germanic peoples became thoroughly Romanized and ad- opted Christianity, by the fifth century the Roman empire in the West was no more, having gradually evolved into a series of Germanic successor states. In the East, the Byzantine empire survived for another millennium but through most of its existence as primarily a Greek state based in Anatolia and the Greek peninsula.