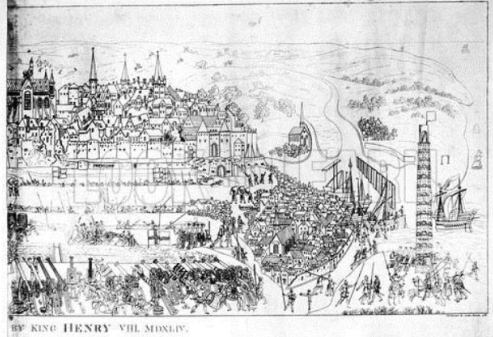 Throughout this year, and the beginning of 1544, preparations were made for the great invasion of France under the combined leadership of Henry of England and Charles of Spain. The cost of the undertaking was so vast, however, that the general coinage of the realm was debased by introducing a larger amount of alloy into its gold and silver coins. By these means the king’s mint acquired large sums of money, since the face value of the currency was the same despite the smaller amount of precious metal. Prices naturally rose, at a rate of approximately 10 per cent each year, and the economy took twenty years to recover. These were the results of the king’s passion for war.

Other ways of making money were also found. It was decided to exact a ‘benevolence’ from the nation. Those who owned lands worth more than an annual value of 40 shillings were to be requested to contribute to the king’s coffers; it was their duty to the sovereign. Those who refused were punished. One alderman of London was sent as a common soldier to the Scottish border, where his commander was told to subject him to the harshest and most dangerous duties. Another alderman was simply sent to the Tower, where he remained for three months.

The preparation for the invasion had already cost much blood. Scotland had renounced all its promises and agreements with the king, concluded after the disaster at Solway Moss, and once more established the old alliance with France. Henry could not contemplate the prospect of an enemy at his back door, and so he resolved to punish the Scots for what he regarded as their duplicity and faithlessness. At the beginning of May an English fleet sailed up the Firth of Forth and their commander, Edward Seymour, earl of Hertford, was ordered to ‘burn Edinburgh town, so razed and defaced when you have sacked and gotten what you can of it, as there may remain forever a perpetual memory of the vengeance of God’. He was commanded to overthrow the castle and beat down Holyrood House, while at the same time putting to the flame all the towns and villages in the immediate vicinity. The campaign of terror was then to continue to Leith and St Andrews ‘putting man, woman and child to fire and sword, without exception, where any resistance shall be made against you’. Once more the wrath of the king meant death.

Hertford duly obeyed the orders of his sovereign and reported on 9 May that he had made ‘a jolly fire and smoke upon the town’ of Edinburgh. Nine days later he wrote that his mission was accomplished to the effect that ‘we trust your Majesty shall hear that the like devastation hath not been made in Scotland these many years’. A French fleet came to the aid of their allies and landed a considerable force which, with the Scottish army, marched to the border country; their campaign of fire and fury was duly challenged by another invasion by the earl of Hertford who in the autumn of the year destroyed 243 villages, five market towns and seven monasteries. This dance of death between the two nations would continue, at intervals, until the time of Oliver Cromwell.

The army of the English set out for France itself in the summer of 1544. The largest invasion force ever was dispatched abroad: 48,000 men took to the Channel. It needed the combined strength of 6,500 horses to drag the guns and carts of ammunition. The bishop of Winchester, Stephen Gardiner, had been appointed somewhat quixotically as Purveyor General; he said that he had been a ‘continual purveyor of cheese, butter, herrings and stockfish’. His enemies now referred to him as ‘Stephen Stockfish’.

The first scheme of war provided that the armies of the king and the emperor should march upon Paris, but Henry detected flaws in the proposal; it would leave his forces dangerously unprotected in the rear. It was first necessary for him to subdue the towns of Boulogne and Montreuil before passing the Somme on his way to the capital. By the end of June the English army had gathered about Boulogne, and on 14 July Henry crossed the Channel. A few days later he rode out from the gates of Calais, then an English garrison town, and came upon the territories of France; across his saddle he placed a great musket with a long iron barrel. He was travelling 25 miles south to join his army at Boulogne. The siege guns were soon blasting at the castle on the eastern side of the hilltop town.

Diplomatic, as well as military, activities were under way. In the summer of 1544 Francis wrote to the two kings, privately urging each of them to come to terms with him and thus hoping to divide their counsels: Henry sent the letter on to his ally, Charles, and replied to the French king that he was suggesting a policy ‘wherein you greatly touch our honour, the which, as you are aware, having always guarded inviolably to this present, I will never consent in my old age that it shall be any way distained’. In the following month he wrote – or rather dictated – a letter to Katherine Parr even as he sustained the siege of Boulogne. He told her that ‘we be so occupied, and have so much to do in foreseeing and caring for everything ourself, as we have almost no manner of rest or leisure to do any other thing’. This is the king at war, energetic and ever busy. He was delighted to be once more in arms, and one of his commanders reported that he was ‘merry and in as good health as I have seen his grace at any time this seven year’. He was in pursuit of glory, which was really the only reason for warfare.

Charles V was detained at the town of Dizier or St Didier for seven weeks, thus losing half the time that had been calculated for the march upon Paris itself. But the emperor then pressed forward, even though in the process his communications were broken and his supplies cut off. The advance surprised Henry, but the king could not have foreseen the duplicity of his ally. Francis and Charles had settled the terms of a separate peace, leaving out Henry, and needed only an excuse to enact it. With Charles’s army in perilous circumstance, the emperor declared himself obliged to make a treaty. The Spaniards and the French once more joined hands in the diplomatic dance.

The siege of Boulogne had been protracted beyond anticipation. The valour of the defenders of the town provoked even the king’s admiration. ‘They fought hand to hand,’ he wrote to the queen, ‘much manfuller than either Burgundians or Flemings would have done . . .’ Yet finally he prevailed, and the people of the town marched out in surrender. Montreuil still held out, however, and it was clear to all that the English army would never reach the gates of Paris. At this juncture Charles sealed the treaty with Francis, leaving Henry the only belligerent. The king’s anger and incredulity at the treachery of his ally are understandable, but the relative failure of the invasion is not in doubt. He had taken Boulogne, but not Paris, at an estimated cost of some £2 million; that was roughly equivalent to ten years of normal spending. The bulk of the crown lands, acquired from the Church, were sold off. This led directly to the frailty of the royal finances in subsequent years, and was one of the contributing factors to the Civil War. Yet this is to move too far forward. In the immediate context of 1544 the treasury was exhausted and Stephen Gardiner was moved to write, in emulation of Colet thirty-three years before, that ‘the worst peace is better than the best war’. On the last day of September Henry sailed back to England.

The threat from France remained, more dangerous than ever after the peace with Spain. It became clear by the spring of the following year that Francis was planning an invasion and was gathering a large fleet of ships for the purpose; galleys were even being brought overland from the Mediterranean to join the flotilla. The fortifications along England’s shores were strengthened further and the trained bands of local fighters were put on alert. In the event the French force got precisely nowhere; inclement winds propelled the ships back to their own coastline, and the supplies of food began to run low. So the French commanders ordered a retreat. An attempt was made at battle near Portsmouth, when some French galleys fired at the English ships, but once more an unfavourable wind forced them back. A French fleet was sighted off Shoreham, but again it turned around; an outbreak of disease had felled the sailors. In the course of this flurry of maritime activity one ship, the Mary Rose, managed to sink itself in Portsmouth harbour. This can be taken as a symbol of the armed struggle between England and France.