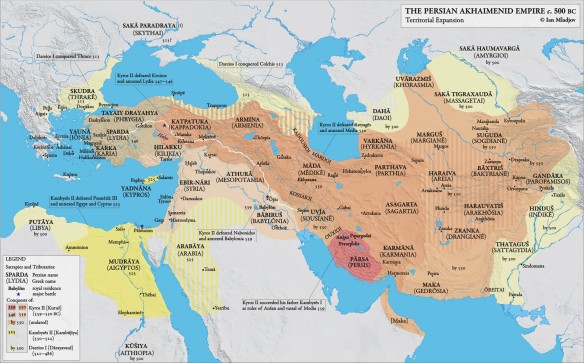 The Median Empire was overthrown by the king of Anshan, Cyrus II, either in 554/553 or 550/549 BCE. The new dynasty founded by Cyrus adopted the administrative practices of the Medes. Once Cyrus expanded his empire to incorporate Asia Minor, Mesopotamia, and parts of Central and South Asia, the newly founded empire required a new and more elaborate administrative structure. The principal challenge for a vast empire, which ruled diverse geographical regions and contained numerous ethnic, linguistic, and religious communities with their own social organizations, was how to collect taxes and generate sufficient revenue to pay the salaries of the king’s officials and troops. Beginning with Cyrus the Great but particularly during the long reign of Darius I (r. 522–486 BCE), the Achaemenids divided their empire into provinces, or satrapies. The Persian king appointed a governor, or satrap, to each province. The satraps were not hereditary rulers. They were appointed by the Persian king and served at the pleasure of their royal master. Every new country or region that had been conquered was assessed for taxes. At times for purely administrative purposes, neighboring regions were joined to a newly conquered area in a single unit (Herodotus: 3.89). The satrap was responsible for maintaining security in the area under his control, making sure that the cultivation of land would not be disrupted. Each satrap had his own army, and he could use it to defend the territory under his jurisdiction. The satraps also provided troops to the king’s army during military campaigns, thereby contributing to the central government’s cavalry and infantry forces. In a long paragraph in his Oeconomicus, the Greek author Xenophon described the relationship between the Persian king and the provincial power centers in the following words:

We agree that he [the Persian king] is seriously concerned about military matters, because he gives orders to each man [governor] who is in charge of the countries from which he receives tribute to supply provisions for a specified number of horsemen, archers, slingers, and light-armed troops who will be capable of controlling his subjects and of protecting the country if an enemy should attack. And besides these he maintains guards in the citadels. And the officials to whom this duty has been assigned supplies provisions for the guards. The king holds an annual review of the mercenaries and the other troops who have been ordered to under arms, assembling all of them, except those in the citadels, at the “place of muster.” He personally inspects the troops near his own residence and he sends men whom he trusts to review those who live farther away. And those garrison commanders and chiliarchs [commander of a thousand] and satraps who show up with the full complement of soldiers assigned to them and present them equipped with horses that are well groomed and weapons that are well maintained he promotes with honours and rewards with valuable gifts. But those commanders whom he finds either showing a lack of concern for their garrisons or making a private profit from them, he punishes severely, removing them from office and appointing other men to take charge. Furthermore, he himself examines all of the land that he seized as he rides through it, and by sending men whom he trusts he surveys the land he does not examine personally. And those governors whom he observes presenting densely populated land and fields under cultivation stocked with the trees and crops that grow in that region, to these he gives additional territory and he lavishes gifts on them and rewards them with seats of honour; but those whose lands he seized uncultivated and sparsely populated, because of the governor’s harshness or arrogance or lack of concern, he punishes, removing them from office and appointing other governors. Since he does these things, does he seem to be less concerned that the earth be well cultivated by the inhabitants than that it be well protected by the garrisons? Separate officials are appointed by him for each of these activities, not the same men: some are in charge of the inhabitants and the workers, and collect tribute from them; others command the armed troops and the garrisons. If the garrison commander does not adequately defend the country the official concerned with the inhabitants and agricultural production brings an accusation against the commander on the grounds that the people are not able to do their work because they are not properly protected. But if the garrison commander provides peace for farming, whereas the civil governor presents under populated, unproductive land, the garrison commander, in turn, brings an accusation against him. For, on the whole, those who cultivate the land poorly are unable to support garrisons or pay tribute. But wherever a satrap is appointed, he is concerned with both areas of activity. (Xenophon: IV.5–12)

After the collapse of the Persian Empire in 330 BCE, Alexander and his Macedonian generals continued with the administrative practices of the Achaemenid kings. The short-lived empire of Alexander and the Seleucid state, which succeeded it in Iran, Mesopotamia, and parts of Asia Minor, relied on a system of vassals who paid tribute and taxes to their Seleucid overlords. The Seleucids, who ruled from Antioch in Syria (present-day southern Turkey), also relied on Greek colonies, which had been founded by Alexander during his conquests.

The Achaemenid army was the backbone of the Achaemenid state. The army served as the principal instrument for maintaining order in the empire. As the Achaemenid state grew from a small kingdom in southern Iran to the largest empire the world had ever seen, the Persian army went through a major transformation. The armies of Cyrus II the Great, the founder of the state, consisted of Persian tribal units, which had initially supported his rebellion against the Medes. As the small Persian state expanded and converted itself into an empire, the Achaemenid monarchs developed a professional army. As displayed by the magnificent wall carvings of Persepolis in southern Iran, the core units of the standing army were recruited from the Persians and the Medes. The “royal cavalry guard and the ‘Immortals’ composed the core of this standing army” (Frye: 104). According to Herodotus, the Immortals corps “was known as the Immortals, because it was invariably kept up to strength; if a man was killed or fell sick, the vacancy he left was at once filled, so that its strength was never more nor less than 10,000” (Herodotus: 7.83). The pool for recruiting the Achaemenid army was vast and deep, as ancient Persians were educated in the art of warfare since childhood. As young boys, they learned how to ride and draw bows. Sport events and hunting expeditions were organized as the means of military training.

The Achaemenid state was originally a land power. As the boundaries of the empire expanded and reached the shores of the Mediterranean and Aegean Seas, the Achaemenids turned their attention to establishing Persian supremacy on the eastern Mediterranean and launched a navy. The Achaemenian navy was “the domain of Phoenicians and to some extent the Inonian” and Cyprian Greeks, but Iranian marines constituted an important component of the Achaemenian naval forces and “fought on the ships” (Frye: 107). The Phoenicians had joined the Persian navy of their own free will and enjoyed enormous power in the military decision-making process. For example, when the Achaemenid king Cambyses II ordered his fleet to attack Carthage, the Phoenicians “refused to go, because of the close bond which connected Phoenicia and Carthage” (Herodotus: 3.19). With the Phoenicians “out of it and the remainder of the naval force too weak to undertake the campaign alone, the Carthaginians escaped Persian domination” (Herodotus: 3.19). Darius, who wished to know where Indus joined the Indian Ocean, sent an expedition down the river under the command of the Inonian naval admiral Scylax of Caryanda (Herodotus: 4.44). The naval expedition followed the course of the river eastward until it reached the ocean; then, “returning westward, the ships followed the coast, and after a voyage of some thirty months,” reached Egypt (Herodotus: 4.44). This allowed Darius to make regular use of the Indian Ocean and complete his conquest of the Indus Valley (Herodotus: 4.44).

While the Achaemenid army was the principal instrument of territorial expansion and preservation of security and order, military might was used not only to wage war but also to conduct co-option and peace. To the astonishment of their enemies, the Achaemenid kings generally treated the rulers they defeated with kindness and magnanimity. According to Herodotus, Cyrus treated Astyages, the defeated king of Media, “with great consideration and kept him at his court until he died” (Herodotus: 1.130). Cyrus displayed the same benevolent generosity and forgiveness toward Croesus, the king of Lydia (Herodotus: 1.88–91). If a king sought peace he was pardoned, and at times he or one of his sons was restored on the throne. There are “many instances from which one may infer that this sort of generosity” and compassion was a common practice among ancient Iranians (Herodotus: 3.15). As Herodotus remarked, the Persians were in “the habit of treating the sons of the kings with honor, and even of restoring to their sons the thrones of those who have rebelled against them” (Herodotus: 3.15). If, however, after being defeated and pardoned a king tried to organize a revolt among his people, he was condemned to death.