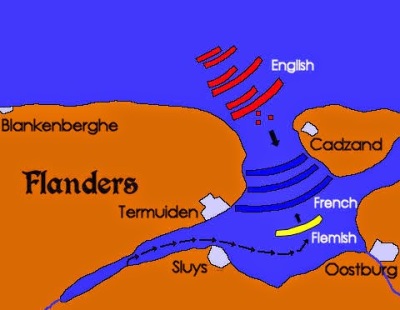 “Battle of Sluys – 24 June, 1340. Naval battle between an English fleet, under King Edward lll and a French fleet under Hugues Quieret, Admiral of France” – Medieval naval battle – ship to ship conflict was acted upon by boarding the enemy vessel and going into melee by Peter Dennis

The first stages of the Hundred Years’ War were marked by an ongoing battle at sea between French and English privateers, pirates and merchants, each side hoping to profit and deny valuable supplies to the enemy. But already in 1338 Philip VI made use of a larger royal navy, mostly composed of galleys hired from Genoa. He launched several devastating raids against southern English ports, partly destroying several towns including Portsmouth, Southampton and Hastings. These raids effectively cut King Edward III’s lines of communication, including supplies, between his continental possessions and England, and also destroying and capturing a number of ships, including Edward III’s own great ships Cog Edward and Christopher: Philip and his advisors went on from there to organize a major invasion of England in 1339, only to have a storm scatter his fleet and spoil their plans.

From that point, France’s naval position rapidly went downhill. The Genoese mercenaries enjoyed a series of impressive successes, but started fighting among themselves after their own admiral, Ayton Doria, tried to cheat them out of their pay. The oarsmen mutinied, seized several of the galleys and headed for home, losing Philip VI two thirds of his battle fleet at one blow. By the end of 1339 the rest of the Italian oarsmen had been sent home. That left France with 22 royal galleys of its own, but an English raid on Boulogne early in 1340 burned 18 of these where they had been laid up for the winter.

Without this elite fighting force, the French seem to have lost confidence and in early 1340 decided on a defensive policy, blocking the English invasion fleet’s access to the Flemish coast where they intended to land safely, since Flanders was England’s ally. The French task could be accomplished with armed merchantmen, the ‘Great Army of the Sea’, as it was grandiosely named. It consisted of up to 200 ships, the largest grouping that could be found and therefore probably mostly cogs. The cost to equip them and hire crews was paid for with a heavy tax on Normandy.

In the meantime, an English invasion fleet was gathered. Made up of about 160 ships, most of them were privately owned and pressed into service to the crown. This fleet, commanded by Edward III in person, sailed for Flanders on 22 June 1340. They apparently did not expect to encounter the French fleet at the mouth of the River Zwyn two days later, the French determined to keep the English from landing upriver. At this stage, Edward had no choice but to go forwards. A retreat could easily have turned into a massacre, French ships able to cut off the English one by one as they spread out on the open sea, not to mention what a crushing blow a retreat would have been to King Edward’s honour.

The Battle of Sluys began on 24 June 1340. The French decided on a battle strategy that suggests the French admirals, Hugh Quieret and Nicholas Behuchat, did not trust their ships’ fighting capabilities and above all feared the English slipping by and landing their army. So the French blocked the mouth of the river completely, chaining the ships together in three long lines across the shallow estuary, about 5km (3 miles) wide at its entrance.

Apparently the most experienced of the French ship commanders advised against remaining in such a confined space, without room to manoeuvre and with the wind blowing into the mouth of the river, but the admirals did not listen. The chronicler Froissart tells that the ships, fortified with wooden fighting platforms, looked like a row of castles. The French strategy suggests either extremely poor seamanship, lack of information about the English fleet coming against them or reckless over-confidence. Some historians have questioned whether the French could really have chained their ships together; this practice of ‘bridling’ was described by the historian Livy and maybe medieval chroniclers were again borrowing from the past instead of observing the present. For sailing ships in a confined space affected by the tide, such a tactic was insane. Indeed, the French ships soon found themselves in difficulty, drifting east and fouling each other. The ships appear to have been cast loose at this point, but the French found themselves in serious disorder just as the English began to attack, taking advantage of wind and tide and not starting their final approach until early afternoon when the sun would no longer be in their eyes. The French were trying to edge west again when the battle began, adding to the confusion.

The English approached in three lines, with the largest ships to the front, including Edward III’s own flagship, the cog Thomas. Height was once again an advantage, and the English had the manpower to exploit it to its fullest – a large army of men-at-arms and archers intended for the land army. Although often forgotten by chivalry enthusiasts, it was this Battle at Sluys, rather than the more famous Crecy and Poitiers, that showed for the first time the devastating effectiveness of the English longbow. The French marines were for the most part crossbowmen. They were much slower than their English equivalents in those crucial moments as the ships closed, and besides were probably under strength, since the French had lost most of their Italian mercenary crossbowmen. The French did what they could to compensate, including lashing boats full of stones to their masts and posting men at the masthead to hurl the rocks on enemy heads. By that time, however, many crews would have been too thinned to fight effectively.

The fighting was hot. Edward III himself was shot through the thigh with a crossbow bolt, and fighting raged from about 3.00 PM until nearly 10.00 PM (with two ships continuing to fight until the next dawn). But the English seem to have massacred the first French line in fairly quick order, gradually working to the second line, which was so tightly clustered together that the ships could not manoeuvre. A large force of Flemings, mustered on the west bank, then fell on the third line from behind, besides killing any Frenchmen who managed to struggle to the shore. The result was a great English victory. No quarter was given, the English slaughtering the crews of captured ships. Between 16,000 and 18,000 French fighting men died that day. Among the dead were both admirals. Behuchat was killed in the fighting; Quieret was captured to be ransomed, but when it was discovered that he had commanded the French attacks against the southern English ports, Edward III ordered him hanged from the mast of his own ship. Not long after the victory, King Edward had his gold coinage redesigned to show himself enthroned on a ship.