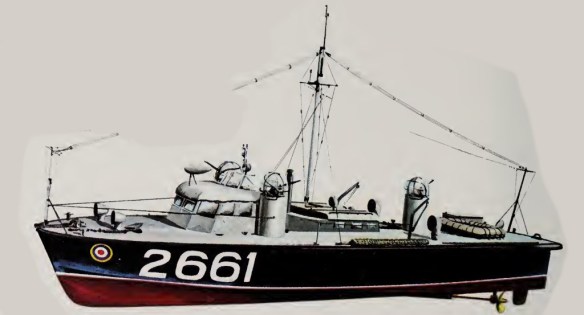 RAF Air/Sea Rescue Launch: These boats saved about 13,000 airmen during the war, and were the natural seaborne counterpart to the huge Allied air umbrella which would cover the Neptune operations. Length: 68 feet. Speed: 38 knots. Armament: 3 x .303 Lewis mg

Armed Salvage Tug: Quite apart from the job of moving the huge Mulberry units to the Normandy coast, the fleets of tug-boats had to cope with about half the landing-craft -those unable to cross the Channel under their own power, and which could not be carried on the decks of transports. Displacement: 700 tons. Speed: 13 knots. Crew: 30. Armament: 1 x 3-in, 2 x 20-mm, 2 x .303-in mg

Armed Trawler: Trawlers-with the minesweepers and other light flotilla craft-were to perform invaluable services as convoy escorts shepherding and marshalling the transports. Hundreds of them were pressed into service for this role. Typical specifications were: Displacement: 378 tons. Speed: 11 1/2 knots. Crew: 30. Armament: 1 x 4-in, 3 x 20-mm, 2 x .303 mg; about 20 depth-charges

The ‘Mulberry Harbours’ was a WW2 civil engineering project of immense size and complexity. The floating harbours provided port facilities during the invasion of Normandy from June 1944 until French ports like Cherbourg were captured.

To carry the overall total of 40-50,000 men with their vehicles and equipment, an armada of over 4,000 landing ships, landing-craft, and barges of varying types was required; only about half of these were capable of crossing the Channel under their own power, the remainder having either to be towed or carried aboard the larger ships. When it is remembered that every man and every vehicle had -to be allotted to a specific ship or landing-craft, that every vehicle before embarkation had to be waterproofed, that men and vehicles had to arrive at the right time at the ‘hards’ (improvised landing places) at which their particular landing-craft was beached – the complications of planning and organisation can easily be imagined. Only when all this had been done, did the huge task of the Royal Navy in assembling, marshalling, and shepherding this heterogeneous collection of vessels across the Channel into paths swept through the enemy minefields, in landing them on the correct beaches, and providing the necessary fire support begin.

Apart from the non-combatant ships and landing-craft carrying men, vehicles, and stores, the US Navy and Royal Navy assembled for the escort and support of the operation a fleet of over 1,500 vessels, ranging from battleships to armed landing-craft. They were divided into two ‘task forces’, the Western Task Force from the US Navy supporting the US landing, and the Eastern Task Force, provided primarily by the Royal Navy, supporting the British/ Canadian landing. Each task force was further sub-divided into ‘forces’, one to each beach, responsible for escorting the assaulting force concerned, positioning it correctly, and providing fire support for the landing. The assault looked primarily to naval gunfire to silence the German coastal batteries and strongpoints.

The magnitude of the naval effort can be judged by the fact that the forces included seven battleships, 23 cruisers, 148 destroyers, as well as a swarm of smaller vessels -sloops, frigates, trawlers, corvettes, patrol craft and minesweepers. In addition, a fleet of 350 specially designed landing-craft carrying guns, rockets, anti-aircraft guns, and machine-guns was assembled for the close support of the actual assault.

The air effort in direct support of the assault was on a similar immense scale. It comprised the most modern types of aircraft available at the period, primarily the Spitfire, Mustang, Typhoon, Lightning, and Thunderbolt.

The exact timing of the assault proved a most complex problem which had its repercussions upon the dates on which the operation could be launched.

Although from the point of view of the assaulting troops there was much to be said for an assault in darkness, both the navies and air forces had to have daylight to carry out their bombardment tasks, and darkness would dangerously increase the likelihood of troops being landed in the wrong place. To assist navigation and for the airborne landings, moonlight was essential. Finally, the German underwater beach obstacles meant that landing must begin three to four hours before high tide. The only suitable periods for the operation therefore were those when there was four to five hours’ daylight between dawn and high tide and at the same time good moonlight was available. All these conditions could only be satisfied on approximately three days in each lunar month.

However powerful and successful the assault, it would clearly be valueless unless the forces ashore could be built up more rapidly than those of the enemy and properly maintained when there. This involved three problems: the planning, escorting, and routing of the follow-up convoys; ensuring that those convoys contained the right personnel, vehicles, and equipment arriving in the right order; and finally ensuring that they could be rapidly unloaded on arrival.

Fifteen personnel ships, 74 ocean-going merchant ships, and more than 200 coasters were loaded before D-Day and these were to form the first wave of the build-up; the requirement thereafter was for eight convoys a day. Once having got the assault force across, however, movement of these convoys was not likely to present any particular problem for the Allied navies.

The question of what they should contain after the initial preplanned flight was more difficult, and a special organisation known as ‘Build-Up Control'(BUCO) was set up in Southampton to ensure that what was shipped across the Channel was geared to the requirements of the battle.

The question of rapid unloading initially appeared the most difficult of all; it could clearly not be done across the beaches as a long-term measure and the likelihood of capturing port facilities intact appeared small, at any rate in the early stages. The problem was solved by perhaps the most famous devices of the entire operation-the artificial harbours known as ‘Mulberries’. They owed their existence primarily to the foresight of Churchill himself, who had directed their development as early as 1942, with his oft-quoted minute: ‘They must float up and down with the tide. . . . Don’t argue the matter. The difficulties will argue for themselves.’ They consisted of an outer breakwater formed partly of sunken blockships and partly of concrete ‘caissons’, 200 feet long, which had to be towed across the Channel; in the area of sheltered water so created were floating piers adapted to take coasters, landing ships or barges; unloading was further assisted by a fleet of amphibious lorries known as DUKWs. The success of the system may be judged by the fact that shortly after the assault, an average of 6,500 vehicles and nearly 40,000 tons of stores was being landed weekly.

The supply of motor and aircraft fuel presented a particular problem. Initially tankers were moored offshore and the fuel fed by buoyed pipeline into depots on land. Preparations were made, however, for an underwater pipeline direct from England to the French coast-PLUTO, or ‘Pipe-Line-Under-the-Ocean’-and eventually, though not in the early stages, fuel supply was in effect drawn direct from England.

Finally, it must not be forgotten that the invading forces could expect assistance from an ally inside France. In this context the French resisters deserve to be included in the catalogue of forces available to the Allies. SOE had been its best to organise and arm them and from early 1943 German demands for labour had assisted recruiting; by 1944 some 100,000 young men had taken to the ‘Maquis’. The vast majority of the resisters’ plans were, of course, geared to the great day when the Allies would land in France once more; in 1943 they had put forward a series of seven ambitious plans to deal with railways, road movement, telecommunications, ammunition dumps, oil fuel installations, headquarters, and railway turntables. By the beginning of 1944, however, many resistance networks had been broken up by the Gestapo and only the railway demolition plan appeared to be capable of any certain implementation. Nevertheless both numbers available and arms supplied were considerable: by May 1944 80,000 Sten-guns, 30,000 pistols, 17,000 rifles, and nearly 3,500 Bren-guns had been parachuted into France; overall there were probably some 100,000 men plus another 35- 40,000 in the Maquis who had a weapon of some sort.

To assist the Resistance and ensure that as far as possible its operations were co-ordinated with those of the Allies, SOE prepared a number of three-man teams (American/British/French) to be parachuted-in uniform -into areas where resistance was expected to flourish, so as to act as liaison between the resisters and the regular forces. In addition the British Special Air Service and the American Operational Groups were entrusted with various raiding and harassing operations for which it was hoped that they could obtain the assistance and support of the Resistance.

Finally, preparations had to be made to take over and run civil affairs in the liberated areas of France pending recognition of a French government. Here also assistance from the Resistance organisation was hoped for.

So the balance sheet of this immense operation shows the following staggering figures:

With such a weight of numbers and material it might well be thought that the assault would be practically irresistible, but two factors must be remembered: first, the hazards and extreme complexity of an amphibious operation of this magnitude, for which there was no precedent; all the most meticulous arrangements could be upset and the utmost confusion caused by some chance occurrence or unpredicted change in the weather: second, the great inherent superiority of the defence over the attack in an amphibious operation, especially against prepared coastal defences; however great the Allied superiority, there could be no certainty that the force would succeed even in securing a foothold. Surprise and deception were the essence of the operation-and complete surprise there could not be, for the Germans knew that the invasion was coming; all they did not know was when and where.

Finally, it was clear to both sides that this was the decisive operation of the war. If the landing succeeded, Germany must eventually be crushed sooner or later between the advancing forces of the Russians and the Allies. Should the landing fail, the Allies might well take years to recover from their losses in men, material, and morale; the peoples of Occupied Europe would give up hope and Germany would be left free to turn and square the account with the Russians.

The broad shoulders of General Eisenhower carried an immense burden.