The battle of Nesjar between Olav Haraldsson and Earl Svein. This was the biggest sea-battle in Scandinavia in Viking times. 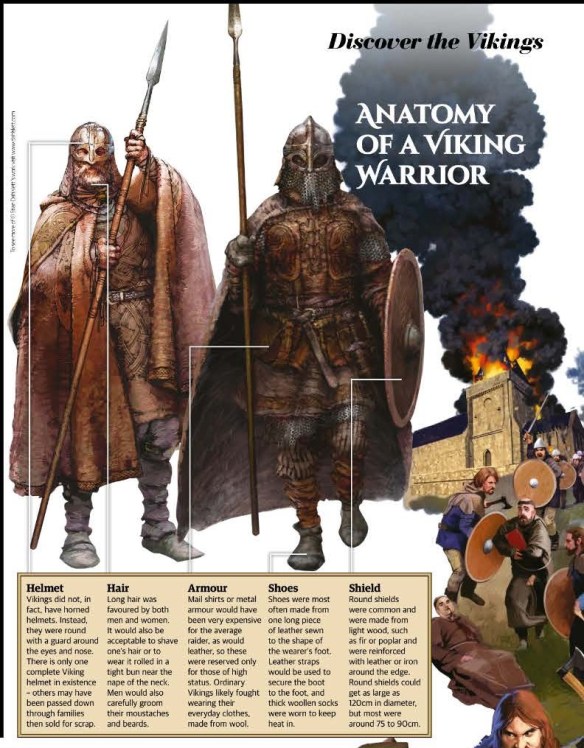 Two famous helmets from central Europe commonly associated with the Viking period are the ‘Olmürz’ helmet. displayed in Vienna, and the ‘St Wenceslas’ helmet from the Treasury of Prague Cathedral. The dome of each is a one-piece forging. While there is no evidence that this technique was used by Norse armourers, the daring of these items and the diverse nature of the equipment used by the Vikings suggests helmets of this type may have been in use. Olaf the Saint is said to have deployed a unit of 100 picked men at the battle of Nesjar armed in coats of mail and ‘foreign’ helmets.

The battle of Nesjar in 1016, between the Viking King Olav Haraldsson and the Earl of Lade, Svein Håkonsson, would come to be seen as the biggest and most decisive sea battle in Norwegian history. During the 11 or 12 years following his victory, King Olav worked to strengthen the king’s power at the expense of the local chieftains and – most important for his subsequent reputation – establish Christianity as the only permitted religion in the country.

Olav directed the battle from his own longship, Karlhode, named for the carving of a king’s head that adorned the bow-stem. According to Snorre, Olav’s tactic was to hold his fleet in tight formation and let the enemy attack first. When the enemy had cast their spears and other missiles against the king’s men’s shields, his men would attack more or less independently wherever they saw the possibility of capturing an enemy ship.

Earl Svein had a significantly bigger army than Olav, and his personal guard possibly numbered up to 200 heavily armed warriors. Olav had 100 men in chainmail on his ship, and he had hand-picked the troops to stand in the front ranks of the leading ships. Olav’s men were battle-hardened by their experience of wars in England, and they easily captured Svein’s ships, whose crews were mostly inexperienced in warfare. Olav’s own ship headed straight for the earl’s ship, and his men held it fast with grappling hooks. Svein responded by having the whole of his ship’s stem cut off, enabling him to flee.

A runestone in Sweden memorializes the man Geirbjörn, who had been killed in a fight: “Norwegians killed him on Asbjörn’s ship.” It is tempting to think that Asbjörn was a Viking chieftain and that Geirbjörn died during a sea battle, but perhaps the ship was a merchant vessel and Geirbjörn was killed during a quarrel among merchants, or when a cargo ship was attacked by raiders.

Be that as it may, Vikings certainly knew how to fight at sea, although they did not at first have to do it much when they attacked their victims on raids in Europe, for the kings there did not have navies that could meet the Vikings on equal terms. The Europeans eventually learned to challenge the Vikings in their own element, on the water, as when, in 882, “King Alfred went out with ships and fought against four ship-loads of Danish men and took two of the ships, and killed the men; and two surrendered to him, and the men were badly knocked about and wounded before they surrendered.” Still, European navies never became very effective in defending against the Vikings, and the kings preferred to “fight fire with fire,” that is, to rely on Viking mercenaries to defend territory against other Vikings.

In Scandinavia itself, ambitious chieftains and kings often fought one another in great sea battles. The skalds liked to describe such heroic occasions in some detail, so we are happily able to learn much about how Vikings fought on ships. Later saga literature, such as the Heimskringla, tells with great verve exciting stories about sea battles, but they represent simply later authors imaginatively weaving narratives that have very little value as historical sources.

Before the actual sea battle began, the chieftain exhorted his warriors to fight bravely. Before he battled the Danish king in 1062, King Harald Hardruler of Norway, for example, “told the troops of warriors to shoot and strike,” and “the famous ruler said each of us must fall crosswise on top of one another rather than yield.” Ten the ship would be rowed to an enemy ship, preferably the leader’s: it would “lie alongside the ship.” When the warriors “join[ed] together the stems of the longships,” they created a platform on which they could fight.

Then the battle started. As one poet expressed it, with typical northern understatement, “it was not as if a maiden was bringing a man leek or ale”: in other words, it was a horrid experience.  “The bold lord cut down warriors; he walked enraged across the warship.” “We [warriors] went enraged onto the ships under the banners,” the warrior poet Sigvat recounted after fighting under Olav Haraldsson in the battle of Nesjar in 1016. Different poets celebrating different battles fill in the details. Warriors and, especially, their leaders were supposed to be “angry” during the fight- the word shows up repeatedly in the poetry. Their enemies suffered their anger; there was blood everywhere: “Dark blood splashed on the pliant row of nails [= ship], gore spurted on the shield-rail, the deck-plank was sprinkled with blood.” “The army fell on the deck” so that “the slain lay tightly packed on the boards,” unless they “went wounded overboard.” In the end, “the prince won the victory” and could take over the ships of those he had defeated. If they were still in a repairable state, ships were extremely valuable war booty, not surprising considering the amount of work that went into constructing the great longships.

Afterward, the bodies of the dead washed up on the beaches. With their characteristic fascination with gore, skalds like Arnorr jarlaskald did not hesitate to describe the grisly scene, where carrion eaters like eagles and wolves had been given a feast: Sandy corpses of [the loser] Sveinn’s men are cast from the south onto the beaches; far and wide people see where bodies float off Jutland. The wolf drags a heap of slain from the water; Olav’s son [= King Magnus Olavsson of Norway] made fasting forbidden for the eagle; the wolf tears a corpse in the bays.

Sea battles often had momentous effects, with the lives and reputations, not only of warriors, but also of entire kingdoms, hanging in the balance. Many a Scandinavian king and chieftain met his end in battle, like the Norwegian king Olav Tryggvason, who fell in the battle of Svöldr in 1000, fighting a coalition of the Danish and Swedish kings as well as a Norwegian chieftain. His namesake Olav Haraldsson won Norwegian kingship at the battle of Nesjar in 1016. Olav’s half-brother Harald Hardruler tried to conquer Denmark from his rival, King Svein Estridsson, in the battle of Nissan River in 1062, but although the Norwegians were victorious in the battle, Harald did not gain Denmark. The battle was inconclusive since King Svein and some of his warriors managed to escape Harald’s clutches by ignominiously rowing ashore in a small boat. Great sea battles were often the decisive events when Scandinavian rulers fought wars with one another, and the skalds of the victorious ruler would make sure that his lord’s exploits became famous. In the historical sagas of high-medieval Iceland, battle narratives often allow for the most impressive and rousing prose. The Saga of Olav Trygvason from the early thirteenth century ends, for example, with a climactic retelling of the battle of Svöldr. The story has fascinated generations of Scandinavian schoolchildren, and it continues to impress modern readers.

1 thought on “The Battle of Nesjar”