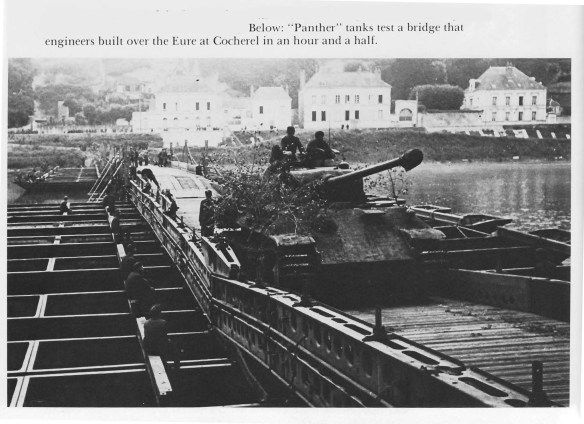 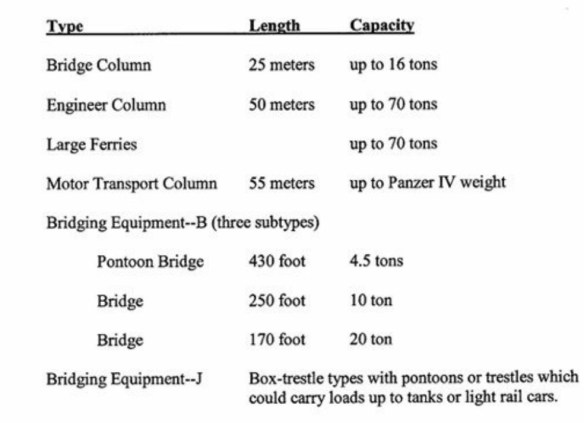 Note 1: Each mechanized or motorized division had a Bridging Equipment B unit of some model. Each infantry type regiment contained one combat engineer company.

Note 2: Total of fourteen Equipment B types and eight Equipment J types within Army Group B.

Note 3: Engineer troops not within the engineer battalions were not from the Engineer Corps but were troops of the same branch their unit supported but were trained in some engineer support tasks.

General Manteuffel insisted on a several areas before the offensive started. He demanded sufficient stocks of fuel and ammunition, sufficient air support to support the ground forces, complete reorganization of Panzer divisions and artillery units, and auxiliary traffic control to supplement the engineers that would be required for bridging tasks. The Panzer divisions had approximately sixty to seventy tanks each including assault guns. The Panzer Lehr Division added another 100 tanks and assault guns. General Manteuffel, probably the most capable commander left in the West, directed specific movement orders to his subordinate commanders. He directed that no passing would occur on the roads and that motorized units were to select only the most capable “Eifel” vehicles in the area-even if from civilians. He used his military police to direct traffic on the roads. Fifth Army only received one and a half units of fuel. The rest was to be brought up during the offensive. As a result, General Manteuffel realized they would be unable to bring forward the artillery and rocket projectors after the offensive started.

The following bridging assets were available to Fifth Panzer Army: LXVI Corps had two columns, LVIII Panzer Corps has one and a half pontoon columns, and XLVII Panzer Corps had one engineer and one pontoon column. Additionally, 2nd Panzer Division and the Panzer Training Division had an additional motor vehicle column each. Sufficient lumber for construction of bridges was made available to avoid use of the bridging equipment units at the Clerf Rivers crossings. Engineer units were directed to save the use of their equipment for crossings over the Ourthe River and, most important, over the Meuse River. The transportation of the lumber for the emergency bridges caused difficulties because of a lack of spare trucks. A solution was found by unloading bridge columns and hauling the lumber to the sites where emergency bridges would be built after the assault. Then the bridging equipment would be uploaded and prepared for the assault.

Fifth Army also relied heavily upon the Organization Todt (OT) to move equipment up to the initial battle positions. This allowed the assault vehicles to save fuel for use in the offensive. The OT pulled vehicles to positions, recovered stuck vehicles, moved up bridging equipment, pulled equipment up hills and generally assisted in movement from the autobahn. 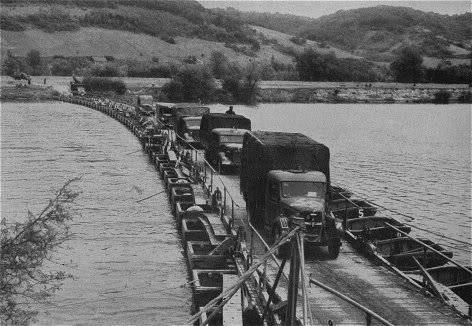 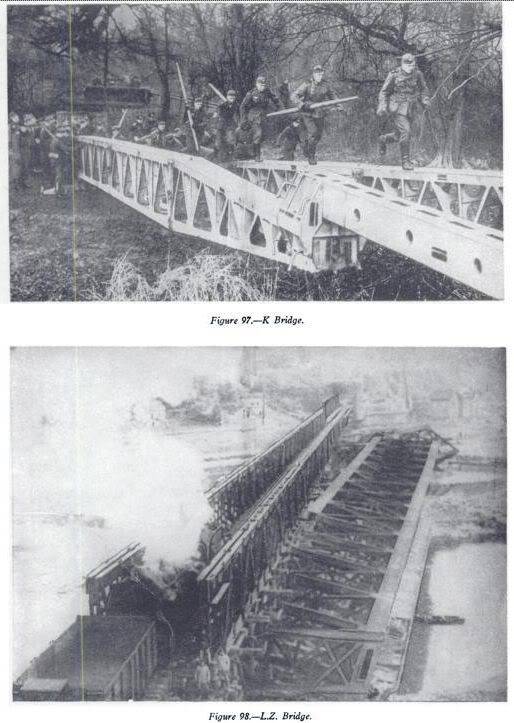 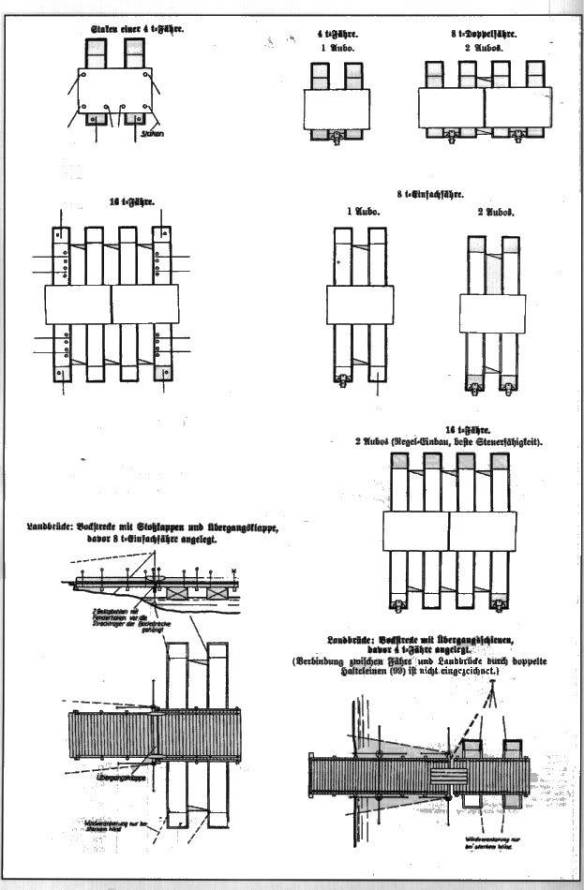 All Divisional engineer units had light or medium bridging columns for constructing temporary bridges. GHQ units were equipped to put up semi-permanent bridges.

In service at the beginning of the war was a miscellany of fairly old equipment such as the Bruckengerat C, a small wooden pontoon bridge with built-up superstructure that could be used in a variety of roles, with a maximum weight of just over five tonnes. For most of the war, however, there were two standard bridging equipment in use by the Divisions, the Bruckengerat K and the Bruckengerat B, the bridging columns being identified by the appropriate initial letter.

The Bruckengerat K was the standard bridge of the armoured engineers. It was a box or bow girder bridge mounted on three-compartment pontoons and able to be laid in sections two, three or four girders wide. The official maximum rating was 16 tonnes load.

K pontoon and trestle equipment (Bruckengerat K).—This is the standard bridge carried by engineers in the Panzer division. The pontoons are of a three-section type and the superstructure is similar to the U. S. small box-girder bridge. Bridges of two, three, and four girders can be built, the full girder length of 64 feet being normally used. The track load-carrying capacity and corresponding spans are probably equal to or greater than, the following:

The Bruckengerat B was a normal pattern of pontoon bridge using a flat-bed superstructure on undecked steel pontoons and having a maximum load in excess of 20 tonnes in most of its forms. It was normally issued to Infantry and Panzer Grenadier Divisions but was sometimes allocated to armoured Divisions in addition to Bruckengerat K for special tasks. A third, lighter pattern, Bruckengerat D, was used by some mechanised infantry pioneer platoons in the divisional infantry Regiments. It was a pontoon and girder bridge with a maximum load of 9 tonnes. In addition, all engineer units were trained to build improvised light bridges and carried a supply of wood, etc for this purpose.

GHQ bridging units, normally allocated to Armies, had heavy structures normally with massive decked pontoons supporting wide, built-up spans. A variety was in use, the most common being the ex-Czech Herbert bridge and the Bruckengerat S; both these had a distributed loading (tracked vehicles) of over 24 tonnes. The Germans used a ‘Herbert’ bridge (taken from the Czechoslovakian Army) which would support 35 tons. The description of the bridge is a little confusing. It implies if the freeboard is 12″, it will support 60 tons. The problem is the bridge takes so long to build; it cannot be used in assault actions.

One rather complex approach is to use the formula that it takes 30 minutes for an armored battalion to pass a given point. If the bridge (16-Ton bridge supports 20 Ton Panzer IIIs and IVs) was fairly small (50-75 meters) it is possible that the tanks might make it over at half speed. Maybe one hour for the battalion. This approach is very rough.

Seven German bridge companies built a 375 meter 16-Ton bridge in 16 hours. It is problematic whether or not you can assume that a 185 meter bridge could be built in half the time.

With the equipment of a bridge column, rowed ferries could be built of:

2 pontoons with double attachments with load limit of 4 tons

There were 26 pontoons to a bridge column and each was 8 meters long, 1.5 meters wide and 0.85 meters tall.

There were 140 spike planks that were 6.1 meters long and 0.1 meters wide and 0.15 meters tall. They were laid from pontoon to pontoon.

Finally there were 630 planks, made of wood, ythat were 3.75 meters long, 0.26 meters wide and 0.035 meters thick that made the roadway over the pontoon bridge.

The bridges consisted of a fixed and a floating part; supports in the fixed part are trestles, in the floating part half or whole pontoons, depending on the type of bridge: ramp parts or crossing parts linked the fixed and floating parts of the bridge. Bridges that are built only on fixed supports are called trestle bridges.

With the equipment of a Bridge Column B, the following can be built:

8 ton bridges to a length of 83 meters

Trestle and pontoon stretches to 3.14 meters

8 ton bridges were built on half-pontoons

Trestle and pontoon stretches had 8 stretch carriers, 2 rack carriers, 2 under pieces and a simple covering

Trestle stretches had 12 stretch carriers, 2 rack carriers and 2 under pieces

Pontoon stretches had 124 stretch carriers, 4 rack carriers and 3 under pieces

From Bridge material B the following ferries could be built:

These ferries could be:

The equipment of a Bridge Column B consisted of:

Allowed bridges and ferries to be built up to loads of 4 tons. The following could be built:

Landing stages on half-pontoons up to 70 meters

Bridges on whole pontoons up to 140 meters

special bridges of 84 meters with 42 meters of it floating

Consisted of ready-made box carrier device for heavy loads up to 16 tons and tracked vehicles to 20 tons.

With a half-platoon material one could build:

1 bridge of 16 ton load limit with 9.6 meter support width or

With a full-platoon material one could build :

with the materials of a full column then one could build

1 bridge of 16 ton load limit on floating intermediate supports including a double block of 78.8 meters in length

Bridging material for reconnaissance units that could be carried in trucks

Heavy self-carrying bridges with pontoon support that was taken over from the Austrian and Czech Armies.

The bridging equipment carried was:

1 ferry cable on a spool

2x motorcycle with side car with 2 NCO

1x motorcycle with sidecar with 1 NCO and 1 enlisted man

1x motorcycle with sidecar with 1 NCO and 1 enlisted man