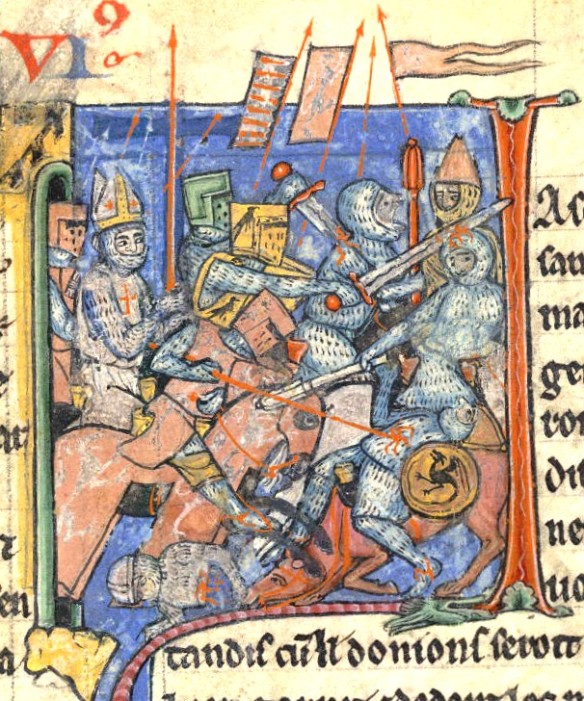 A mitred Adhémar de Monteil carrying the Holy Lance in one of the battles of the First Crusade. Papal legate on crusade; close associate of Urban II 1095–6; travelled in Raymond of Toulouse’s Provençal army; as adept at military command as at prayer, diplomacy and reconciling the factious crusade leaders. Died 1 August 1098 at Antioch.

On 1 August 1098, the quarrels in the city were made worse when the pope’s legate, Bishop Adhemar of Le Puy, died, most likely from typhoid. As the pope’s representative in a religious cause, Adhemar was the one leader in the army with uncontested authority. Without personal ambition, he had shown himself to be a man of excellent character, intelligent, shrewd, tactful, kindly and brave. A good tactician and unafraid in battle, he had carried the Holy Lance, for the army to keep in sight and remember. In his life and conduct, Bishop Adhemar tried hard to embody whatever Christian idealism existed on the crusade, advancing the claims of Christian charity and lessening the evils of Christian warfare. He was much loved by the poor pilgrims and the ordinary soldiers and they mourned for him:

By God’s will, the bishop of Le Puy departed from this world and, resting in peace, fell asleep in the Lord on the Feast of St Peter Ad Vincula. Then there was grief and sorrow and great mourning in the whole army of Christ, for the bishop was a helper of the poor and a counsellor of the rich. He used to keep the clergy in order and preach to the knights, warning them, ‘None of you can be saved unless you respect the poor and give them aid. They will not survive without you, but you cannot be saved without them. They ought every day to pray God to show mercy to you for your manifest sins, with which you daily offend Him. And therefore I beseech you, for love of the Lord, be kind to the poor and help them.’

In the past, historians have suggested that when Urban II preached the First Crusade at Clermont he actually expected only a few hundred knights to answer his call – that, in effect, the pope was caught entirely off guard by the tidal wave of enthusiasm that swept across Europe and, as a consequence, rapidly lost control of the shape and format of the expedition. In fact, a significant corpus of evidence suggests that he harboured fairly grand ambitions for this project and had a real sense of its potential scale and scope. Certainly in the months following the council of Piacenza (1-7 March 1095), where Urban first received the Byzantine appeal for aid, and perhaps even earlier, he developed the idea of a penitential armed pilgrimage to Jerusalem that might simultaneously bring military reinforcement to eastern Christendom and expand the sphere of papal influence. This is not to suggest that the crusade was the only thing on the pope’s mind, but it was a significant feature of his evolving reform agenda. At the same time, Urban began making preparations to ensure that his proposed expedition would meet with a positive response, tapping into the surviving network of fideles beati Petri established under Pope Gregory VII, including Matilda of Tuscany. It is striking how many of the prominent nobles who took the cross after Clermont were themselves fideles, or were connected to this group through marriage or family. Between his arrival in France in July 1095 and the start of the council of Clermont on 18 November, Urban visited a series of prominent monasteries, including his former house of Cluny. He also met and primed the two men whom he hoped would champion the crusading cause.

The first of these was Adhemar of Le Puy, a figure who would become the spiritual shepherd of the First Crusade. Born into a noble family, possibly that of the counts of Valentinois, Adhemar was appointed bishop of Le Puy, in the Auvergne region of south-eastern France, at some point between 1080 and 1087. He had also probably completed a pilgrimage to Jerusalem before 1087. As a prominent Provencal bishop, Adhemar soon became an ally and associate of the region’s most powerful secular ruler, Raymond of Toulouse. The bishop, evidently a firm supporter of the Gregorian papacy, was chosen by Urban II to play a pivotal role in the forthcoming expedition. In August 1095, soon after his arrival in France, the pope journeyed to Le Puy, where he must have met Adhemar. Here, and perhaps on other occasions over the coming months, the two discussed Urban s crusading project, agreeing a plan to orchestrate its reception and prosecution. Unfortunately, no record of these conversations survives, but we can be virtually certain that they took place because the events that followed were clearly stage-managed. Adhemar of Le Puy duly attended the council of Clermont and listened intently to Urban s crusading sermon on 27 November. Then, as soon as the pope fell silent, Adhemar stepped forward to take the cross, becoming the first ever crusader. According to one eyewitness, after Urban had preached the campaign to the East:

The eyes of some were filled with tears, some were frightened and others argued about this matter. But among all at the council -and we all saw him – the bishop of Le Puy, a man of great repute and the highest nobility, went up to the lord pope with a smiling face and on bended knee begged and beseeched his permission and blessing to make the journey.

Bishop Adhemar had effectively been planted in the audience to ensure that the pope’s words met with a warm reaction. On the following day, it was announced that Adhemar would be the official papal representative, or legate, on the coming crusade. Urban himself later wrote that:

We appointed in our place as leader of this journey and labour our dearest son Adhemar, bishop of Le Puy. It follows that anyone who decides to go on this journey should obey his orders as though they were our own and should be entirely subject to his power to loose and bind’ in any decisions that appear to concern this business.

The pope had chosen Adhemar to lead the expedition to Jerusalem, endowing him with absolute spiritual authority over the crusaders. In this position, the bishop of Le Puy proved to be a skilled and patient conciliator, a valuable voice for reason and a staunch advocate of Urban’s policy of detente with the Greek Church of Byzantium. But, although the pope may have envisaged the crusade as a pious armed pilgrimage, he must have known that to succeed the expedition would still require practical military direction and inspirational generalship. Adhemar possessed some talent as a strategist, he may even have had a degree of skill as a military leader, but, with Church law technically forbidding him from actually fighting in battle, the bishop could never truly fulfil the role of overall commander-in-chief of the crusade.