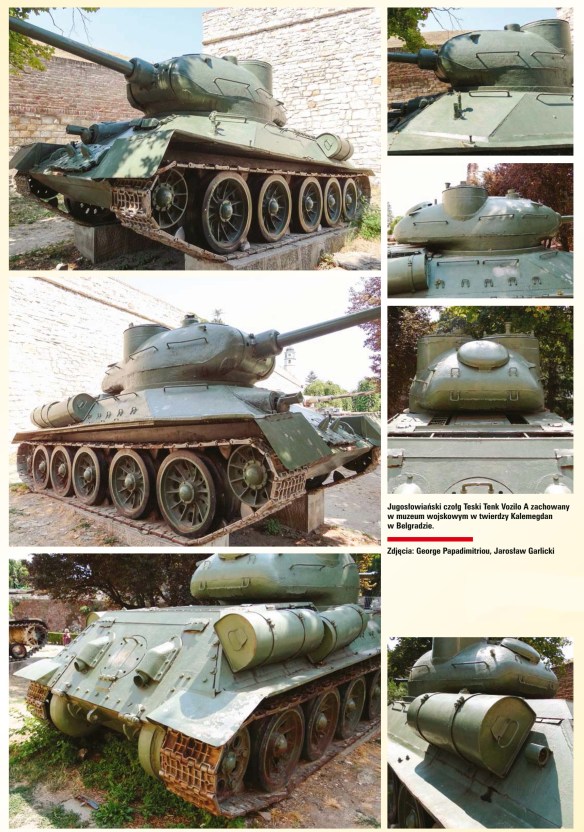 This was a 1949 Yugoslav tank based on the T-34 design. A total of nine prototypes were built. They were designed and built at the height of the danger from Soviet invasion when Yugoslavia was building up its weapons industry.

They were designed by reverse engineering of the Soviet T-34-85 medium tank without any documentation. They are recognizable by their angled front hull corners, modified hull machine gun mantlet, streamlined turret with cylindrical cupola, muzzle brake on the gun, and external fuel tanks that appear to be notched to fit the hull. An alternate version existed, armed with a gun and a mantlet from the M47 Patton. Two examples survive. One of the prototypes is on display at the military museum in the Kalemegdan fortress in Belgrade. The other surviving example is in Banja Luka barracks.

Heavy Tank Type A retained the same internal concept as the T-34 model. The driver sat forward, left, and the machine gunner to his right. Behind them there was a combat compartment with a commander and a gunner to the left of the cannon and the loader to the right. Behind the combat compartment, separated by a thin bulkhead, there was a motor-transmission compartment. During the development, the armored protection was partly improved, but this also resulted in an increase in the mass compared to the T-34 and its 32t. Heavy Tank Type A was 33.5t. All this was reflected in the vehicle’s mobility and the load on the motor-transmission components. The specific ground pressure increased from 0.85kg / cm to 0.91-1kg / cm.

The gun was the same as the ZIS S-53 from 85mm. The cannon mounting is somewhat different, and hydraulics are also improved. Standard Russian ammunition was used, and the development of domestic ammunition was also planned. Secondary armament was replaced: Instead of the original 7.62mm DTM machine gun, the excellent German MG-42 of 7.92mm was mounted. One was coaxial with the gun and the other was mounted in the front hull of the hull and was handled by a driver’s assistant. A novelty was the installation of the American heavy machine gun M2 Browning on the roof of the vehicle. The elevation/depression of the cannon was mechanical, and the turret traverse by electric motor. The depression of the cannon was also increased from the T-34/85, which was now -10°. However, the main gun elevation is reduced to 17° due to the turret shape and the breach clearance. The front machine gun had an depression/elevation of -9.4 ° to + 16 °. Instead of the original TS-15 gunner’s sight, the German TZF from the Pzkpfw IV tank was used, which was modified and its field of vision increased from 14 to 16 degrees, and the possibility to increase magnification from 3X to 4X.

One of the major shortcomings of the Heavy Tank Type A was the turret visibility, which was 50% lower than for the T-34/85 model. The main reason for this is the different shape of the cupola and the new placement of the periscope, which led to the unsighted space for the commander from 4.5 to 87m, and a limit of 19.2 to 42.7m depending on the direction of the periscope and the direction of observation.

Built-in engine was a V2 model, V12-cylinder diesel of maximum 500ks power, which was mostly made from domestic parts. Because of the excessive tolerance and inadequate metal from which the engines were made, they overheated and often broke down. The problem was with the transmission which was bumpy and unreliable. Accumulators (“Lightning” 120ah), as well as electro starter and dynamo were sourced domestically. It was not possible to install the device for starting the engine with compressed air. The track area was identical to that of the T-34 tank. The tracks were 500mm wide, with 72 links, and were heavier than the Russian: 1222-1258kg versus 1150kg.

1 thought on “Teski Tenk Vozilo A (Heavy Tank Type A)”