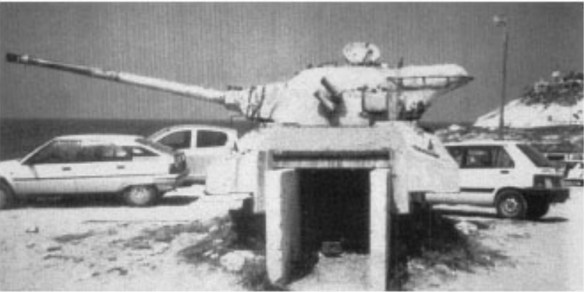 An M50 tank that was used in a static defence role by the Israelis. This view shows the access to the shelter. To give added protection the spoil would have been built up around the sides of the tank so that only the turret was visible. This example was located on the coast at Kibbutz Hanita, just south of the Israel/Lebanon border.

Following the end of the Second World War in 1945 there was a huge stockpile of military materiel as the victors reduced their armed forces to peacetime levels and the Axis powers were disarmed. The surplus hardware was either scrapped or was sold to newly liberated countries or to states that had secured independence. In this scrabble a number of Sherman tanks, which had formed the mainstay of the American armoured forces during the war, were ‘acquired’ by the Israelis and some were used in the 1948 War of Independence, although most arrived after the hostilities had ended.

Despite this setback Israel’s neighbours were determined to eliminate this Jewish homeland and began to strengthen their armed forces. The Egyptians, for example, from 1953 began to procure Soviet T34/85 tanks and SU100 tank destroyers. These were more than a match for the basic Sherman and although the Israelis were able to purchase a number of AMX13 light tanks form France it was clear that the most logical approach was to upgun the reliable Sherman. It also seemed eminently sensible to use the high velocity long-barelled 75mm gun fitted to the AMX13 (and which had been used so successfully by the Germans in the Panther tank).

The larger breach and length of recoil meant that the turret had to be remodelled and the new tank was christened the M50 and by 1961, one hundred Shermans had been reconfigured. Advances in armour technology, however, meant that the 75mm main gun was no longer powerful enough to penetrate the armour of the tanks now fielded by Israel’s enemies. Plans to mount the French 105mm gun (from the AMX30) were introduced which meant that the turret had to be remodelled again and in 1962 the first of the so-called M51s was delivered. The M50 and M51 served throughout the 1960s and were the mainstay of the Israeli armoured forces in the Six-Day War in 1967. However, by the time of the Yom Kippur War in 1973 the Sherman had been relegated to the reserve, replaced by the more powerful American M48, M60 and British Centurion tanks. Some Shermans were still in use in the 1980s and 1990s but they were gradually withdrawn from service.

The fighting that had raged on and off since the War of Independence, and in which the Sherman had played such an important part, had seen the state of Israel grow significantly in size with land seized from her Arab neighbours. The occupied territories were soon settled, but being so close to Israel’s avowed enemies they were exposed to attack and needed defending. One solution was to use emplaced tank turrets.

As the M50 was withdrawn from service a number were modified and were used in a static role to defend the West Bank and the border with Lebanon and Syria. The tank was emplaced whole and all variants of the Sherman hull (including M4, M4A2 and M4A4 models) were seemingly used. Before installation the more modern HVSS tracks and suspension were removed and replaced by the old VVSS bogies which enabled the tank to be unloaded from the transporter and more easily moved to its final location. The engine deck was sometimes removed and replaced with a flat plate. Access to the position was gained either through an enlarged rear door or by removing the transmission cover at the front. A concrete walkway linked the entrance to the tank to a revetted communication trench that often led to further defensive positions. To provide extra protection for the hull, earth and rocks were banked around the tank so that only the turret was visible. Inside the M50, the engine was removed, as were all other fittings save for the turret basket and ammunition stowage. The tank retained its 75mm CN 75-50 main gun and coaxial 7.62mm MG. Later turrets from the more modern M48 tank were used with one being emplaced at Kibbutz Yiron.

Many of the tanks fielded by Israel’s neighbours in the six wars that punctuated the second half of the twentieth century were supplied by the Soviet Union or its satellite states. Many of these were captured by the Israelis and were pressed into service by the Israel Defence Forces, some as fixed fortifications. Turrets taken from ex-Soviet BTR 60 Armoured cars were used in the Golan Heights as were T34/85 turrets and there are also unconfirmed reports that IS3 turrets were used in the Bar Lev Line.

Today a number of these turrets can still be seen, but they are no longer in active service. The role of deterrent has now passed to helicopter gunships and ground-attack aircraft that are quickly able to strike at enemy insurgents.

1 thought on “ISRAELI USE OF FIXED TANK TURRETS”