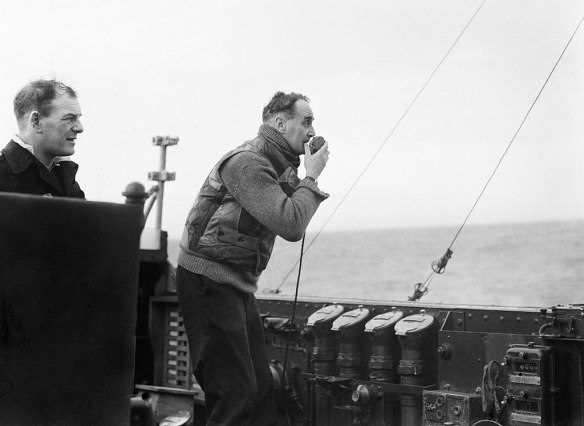 Out With U-boat Killer Number 1; the Second Escort Group’s Success. 26 January To 25 February 1944, on Board HMS Starling. With the 2nd Escort Group, Commanded by Captain F J Walker, CB, DSO and Two Bars, on His Most Recent and Most Successful Patrol. Three of the Group’s Six U-boat “kills” Were Made Within 16 Hours. The sloop WOODPECKER goes into the attack and Captain Walker shouts encouragement to her through the loud hailer.

To the end of the war the main anti-U-boat weapon would continue to be the 300-lb depth charge. The outstanding practitioner with this was Captain Walker, whose 2nd Escort Group accounted for fourteen U-boats while under his command. Walker’s high peak of achievement was his 27- day cruise in the Western Approaches between 31 January and 26 February, 1944. In the course of this the 2nd Escort Group sank no fewer than six U-boats; the full total of U-boats sunk during this strenuous four-week period was eleven, while twelve large Atlantic convoys passed safe and unmolested to their destinations. In these operations Walker made extensive use of what was known as his ‘creeping attack’ method, which he himself called ‘Operation Plaster’. This was essentially a group tactic, already perfected by the end of 1943. It was designed not merely to overcome but to exploit the ASDIC characteristic generally regarded as a weakness – the loss of contact when the attacking ship’s ASDIC beam passed right over the submarine. From the U-boat captain’s point of view, although the constant ping of ASDIC on the hull of his boat could be somewhat unnerving, it was also useful for placing the attacker; when the pinging stopped, attack was imminent, and the U-boat would take all possible evasive measures. Walker’s method was to make his attack while the U-boat was still in ASDIC contact, and pending the perfection of the ahead-throwing weapons, he saw that this could be done very satisfactorily by close cooperation in his Group.

Walker’s method had all the merit of simplicity: its cardinal requirements were a superbly trained group, endless patience, stamina and a large supply of depth charges. In a typical ‘creeping attack’ on a U- boat that had dived deep, one ship (more often than not Walker’s own sloop, Starling – he was, after all, known in the Group as ‘the Boss’) would take the role of directing ship. She would station herself some 1-1,500 yards from a located U-boat which she then stalked by ASDIC contact at a speed matching the U-boat’s, which might be as low as 2 knots. If the U-boat captain was a skilful evader, or if the contact was made on a dark night with the risk of losing the quarry once depth charges broke the ASDIC link, the stalking might take a long time, but while it continued it would be rare for a U-boat to shake off the skilled ASDIC operators of the 2nd E. G. So the U-boat captain (and his crew) would know from the steady ping that he was being pursued, but he would also know that the hunter was half to three-quarters of a mile away. And thus the manoeuvre would proceed until the moment came when the director called the attacking ship to pass him and take station ahead on the same course. She would then close the V-boat very slowly, probably at no more than 5 knots, so as not to be detected on the hydrophones, and also to avoid German acoustic torpedoes. The directing ship would range on her as she advanced, and at the moment when her range exceeded the ASDIC range of the V-boat by the distance this would travel while the depth charges were descending, the director would make the signal to fire. Operation ‘Plaster’ would now begin, perhaps with a salvo of as many as twenty-six charges, dropped in pairs and set to explode at 500-740 feet along the course of the unsuspecting U-boat. If the latter showed a disposition towards evasive action, Walker would have three attackers in line abreast, so that whichever way the V-boat turned, it would be caught. There were no reports on this tactic to U-boat Command, because once held in the vice of the 2nd EG’s ASDIC, no U-boat survived. Walker hunted to the death.

On 31 January, 1944, the attacking ship was Wild Goose (Lieutenant-Commander D. E. G. Wemyss), the U-boat was U 592, and the action was all over very quickly. Creeping attacks were elaborate affairs, and not always necessary. On 8 February it was the turn of HMS Woodpecker, attacking U 762; her first salvo of twenty-two charges was so well placed that no more was needed and Walker made the famous signal to Commander H. L. Pryse,

Come over here and look at the mess you have made.

The next day was a big one for the 2nd EG: two U-boats were destroyed, both by creeping attacks. In the early morning (0615) Wild Goose once more obtained a contact some 10 miles from the homeward-bound convoy SL 147; she called up Starling and the two sloops began a creeping attack which lasted 3 hours and 25 minutes, ending in the destruction of U 734. At almost the same time as Wild Goose’s contact, HMS Kite, following an HF/DF bearing, sighted U 238 some 800 yards off, coming out of the mist. The U-boat dived at once, and Kite, later joined by Magpie, began a long vigil. U 238 was well-handled and elusive; the hours went by, Kite’s depth charges were almost all expended, when Starling and Wild Goose arrived from their earlier victory, and Walker directed Magpie in a creeping attack which began with a Hedgehog salvo, continued with depth charges and destroyed the U-boat. It had taken 8 hours and 266 depth charges to perform the deed. The Group’s fifth sinking came on 11 February, and once again it was Wild Goose that made the contact, and in company with Woodpecker carried out the destruction of U 424 after three attacks. The final (sixth) success had to wait just over a week – until February 19; once more Woodpecker was in the fray, obtaining a contact which, after seven hours, enabled her and Starling to force U 264 to the surface. Her crew abandoned ship and the U-boat went down for the last time; the men were all picked up by the 2nd EG. They were the lucky ones.

In this astonishing action (or series of actions), all, it should be noted, in the vicinity of convoys (hence the abundance of U-boat contacts), Walker’s group had fired off no fewer than 634 depth charges (one wonders that any fish were left alive in the sea). The presence of convoys had a double value in the light of that figure; obviously, some means of replenishment was essential if these tactics were to continue, and sure enough, we find Kite, on 9 February, obtaining a fresh supply of depth charges from a merchantman in HX 277. So we perceive that the tried and trusted anti-submarine weapon remained the essential ingredient in a triumph which, amongst much else, underlined once more the obsolescence of the tried and trusted U-boats of 1939-42. These battles, says Roskill,

marked the climax not only of Captain Walker’s achievements but of the whole long-drawn, bitter offensive by the convoy escorts against their cunning and ruthless enemies.

There was a price to pay, part of it only sad, part irremediable. On the day of her last success, HMS Woodpecker was hit by an acoustic torpedo and her stern blown off. Despite seven days of valiant effort to bring her home, she capsized on 27 February in a storm which finished off the U-boat’s work; by great good fortune, her entire ship’s company was saved. Woodpecker was the 2nd Escort Group’s sole casualty in this whole climactic action; but it had taken a toll which exacted a further most grievous loss not long after. Walker, in these engagements, was like Nelson; every nerve vibrated in him, the battle burnt him like a flame. He hardly ever left the bridge; nourished by corned beef sandwiches and hot cocoa, clad in an old grey pullover and stained leather waistcoat, his senses were alert to every nuance of the action, he breathed his ardour into every phase of it. And Nature claimed its price: on 9 July, 1944, Captain F. J. Walker, CB, DSO and three bars, DSC and two bars, died of a stroke brought on by the cumulative strain of three years’ high intensity war. He was buried at sea – fittingly, for as Admiral Horton said at his funeral service in Liverpool Cathedral,

Not dust nor the light weight of a stone, but all the sea of the Western Approaches shall be his tomb.

And later, with an equally fitting allusion, Horton identified the ultimate secret of Walker’s success:

He trained and welded his own group into a splendidly efficient Band of Brothers.

The only consolation for such a loss was that the battle was now won.