A damaged B-17 bomber being protected by two P-51 fighters.

In the Second World War the bedrock of US strategic bombing tactics in Europe was formation flying in a self-defending 54-aircraft combat wing, which was both dangerous and physically exhausting. Extreme physical effort was required from the pilot to keep station in the turbulence generated by hundreds of propellers. The pilots flying in wing positions depended on the skill of element leaders right up to combat wing level. Poor flying by the leaders, and the constant seesawing of positions, added to pilot fatigue and ran the risk of collisions or breaking the formation, thus providing Luftwaffe day fighters with “cold meat”—isolated aircraft.

Flying consisted of sliding the B-17 Flying Fortress and B-24 Liberator bombers around to maintain the integrity of the formation. Banking was dangerous because of the close proximity of other aircraft. Frequent throttle changes were required, which could lead to excessive fuel consumption, particularly by aircraft flying in high groups. By the spring of 1943, heavy losses to German fighters had forced the USAAF’s 8th Air Force to adopt the “tucked-in wing” formation of three 18-aircraft squadrons stacked closely together with one squadron flying lead, one high and one low.

A combat wing, dubbed a Pulk (herd) by the Luftwaffe, deployed formidable defensive power and was a daunting sight to novice fighter pilots. The B-17G’s defensive armament consisted of thirteen .50 machine guns. A combat wing could bring to bear 648 machine guns firing 14 rounds a second with an effective range of 600 yards (548 m). The two-ounce bullets remained lethal on the human body at ranges of up to 4 miles (6.5 km).

“… the progressive destruction of and dislocation of the German military, industrial and economic system, and the undermining of the morale of the German people to a point where their capacity for armed resistance is fatally weakened.”

Directive on the air war issued by the Western Allies after the Casablanca Conference, January 1943

Self-defending fallacy The USAAF began to make shallow penetrations into Germany in January 1943, and from February losses began to mount steadily. The Luftwaffe’s day fighters were as well armed as the US bombers, and by autumn 1943 they were carrying 30-millimeter (1.2-in.) heavy cannon and 210-millimeter (8.3-in.) rockets. The latter were not particularly accurate, but were effective in loosening up the bomber formations.

Heavy losses over Germany became the norm. The attrition reached a peak on August 17 when the 8th Air Force attacked the fighter assembly plant at Regensburg and the ball-bearing factories at Schweinfurt. Of the 376 aircraft dispatched on the double raid, 60 were lost and many more written off. A second raid on Schweinfurt in October cost the Americans 77 aircraft lost and another 133 damaged out of 291 dispatched. After the second Schweinfurt raid, bombing operations were temporarily suspended. It was brutally clear that the bombers would have to be escorted to and from targets deep in Germany. However, there were no aircraft capable of fulfilling this role.

The USAAF’s P-38 Lightning and P-47 Thunderbolt fighters lacked the performance to meet enemy fighters on equal terms and the range to escort the bombers over Germany. The Luftwaffe could now choose the time and place to attack, even when the P-47’s range was extended by 490-liter (108-gallon) drop tanks. German fighters would often draw the P-47s into combat, at which point they would have to jettison their drop tanks and reduce their escort range. The P-38 had a longer range but poor performance over 6,000 meters (20,000 ft.), the altitude at which most combats over Germany took place. 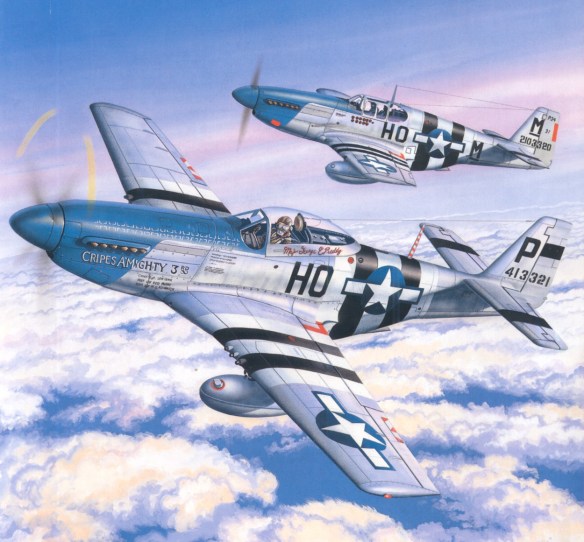 Preddy was killed by “friendly fire” on the morning of December 25, 1944. As commanding officer of the 328th Fighter Squadron, 352nd FG, he was leading a formation of 10 P-51 Mustangs. They had been patrolling for about three hours, when they were directed to assist in a dogfight already in progress. Preddy destroyed two Messerschmitt Bf 109s, (the Bf 109G-14/AS Werk.No. 784111 “Yellow 6” of Uffz. Heinrich Zinnen, Killed and Bf 109G-14 Werk.No.785758 “Yellow 9” Fw. Karl Heinz Schröder, wounded) before being vectored to a lone Focke-Wulf Fw 190, strafing Allied ground forces southeast of Liege, Belgium. As the Fw 190, Preddy, and two other Mustangs passed over the Allied front line at tree-top height, a US Army anti-aircraft (AA) battery (believed to be part of the 430th AA Battalion, XIX Corps), fired at the FW-190 but missed and instead hit all three P-51’s. Preddy managed to release his canopy but was unable to bail out before the aircraft hit the ground at high speed and a low angle. He had a chance of surviving the crash but his wounds from .50 calibre fire were mortal.

The crisis was resolved with the arrival of the North American P-51B Mustang in December 1943. Powered by the Rolls-Royce Merlin and fitted with a 340-liter (75-gallon) drop tank, the P-51B had a range of 1,000 miles (1.6 km), enabling it to fly escort to such targets as Emden, Kiel and Bremen. The bubble-canopied P-51D, which arrived in May 1944, had a boosted performance with reinforced wings, allowing exceptional fuel loads and, with drop tank, a range of 1,500 miles (2,400 km) sufficient for escort to any target and even for the shuttle missions that flew to the Soviet Union.

The P-51D matched the Me 109G in level maneuvering flight and had the edge in climb and dive. Only the rate of roll left the German fighter on equal terms. It could remain in the air for over nine hours. In the P-51D the USAAF possessed a superb escort fighter that it could use to provoke and win a series of air supremacy battles. In January 1944, the Americans had introduced a modified bomber support relay system, which remained standard for the rest of the war. Rather than flying to a predetermined rendezvous point and then accompanying part of the bomber stream until relieved by another unit, a group was allocated an area along the route, which it patrolled while the bomber stream passed through.

As the bombers were approaching … Magdeburg, I was leading a section of seven ships giving close escort to the rear box which was quite a distance behind the main formation. I noticed 20 to 30 single-engine fighters attacking the front boxes, so we dropped our tanks and headed toward them. We came up behind three Me 109s in rather tight formation. I opened fire on one from 300 yards and closed to 150 yards. The 109 burst into flames and went down. I slipped behind the second 109 and fired while closing from 200 to 100 yards. He started burning and disintegrated immediately. He went down spinning. The third enemy aircraft saw us and broke down. I followed him in a steep turn, diving and zooming. I got in many deflection shots, getting hits on the wing and tail section. I ran out of ammunition, so my element leader, Lt. Whisner, continued the attack getting in several good hits. At about 7,000 feet the pilot baled out.

The most experienced P-47 groups were assigned those sectors where enemy opposition was anticipated, while the target leg of the bomber route was flown by P-38s and P-51s. The arrival of the Mustangs prompted another tactical adjustment of the bomber formations. They were reduced to three squadrons of 12 aircraft, with the lead squadron in the center and the trail squadrons formed up above and below. Although overall strength had been cut by one-third, the new formation occupied 17 percent more air space than its predecessor, reducing the strain on pilots and making it easier for the Mustangs to provide escort. The Mustangs were employed not only as escorts, hugging the bomber formation as had the German Me 109s in the Battle of Britain, but as fighting patrols whose role was to seek out and destroy the enemy.