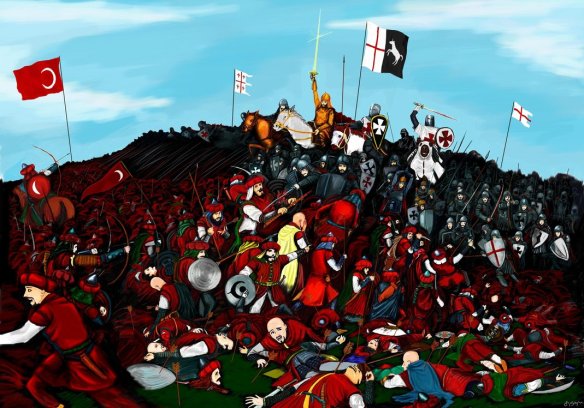 DIDGORI, 12 AUGUST 1121
A 56,000-strong Georgian army under King David IV intercepted and defeated a Seljuq invasion force totalling at least 150,000 men at Didgori, near Tbilisi. David followed up his victory with the capture of Tbilisi in the year 1122. 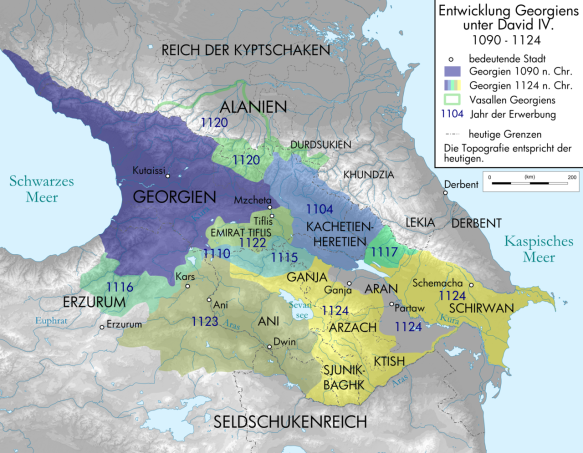 Expansion of Kingdom of Georgia under David IV’s reign.

The son of King Giorgi II, David was raised during one of the darkest chapters of Georgian history. From around 1080, Georgia faced a massive immigration of nomadic Turcoman tribes, which began to settle in the southern Caucasus. Unable to cope with the problem, Giorgi II resigned his throne to his son in 1089. Over the next eleven years, King David gradually cleared his countryside of enemy elements and began resettlement of devastated regions and revival of cities. Encouraged by the beginning of the crusades to the Holy Land (1096-1099), he ceased payment of the annual tribute to the Great Saljūqs and secured his control over most of eastern Georgia by 1105. He reformed the Georgian Ortho dox Church in 1103 and established a new court system (Georg. saajo kari) and police apparatus (Georg. mstovrebi) that strengthened his royal authority.

Between 1105 and 1120, King David enjoyed a series of brilliant victories as he continued his expansion throughout southern Transcaucasia, capturing the key fortresses of Samshvilde, Dzerna, Rustavi, Kaladzori, Lore, Aragani, and others. In 1118-1120, he launched a major military reform and resettled some 40,000 Qipchaq families from the north ern Caucasus steppes to central and eastern Georgia. In turn, the Qipchaqs provided one soldier per family, allowing King David to establish a 40,000-man-strong standing army in addition to his royal troops. This new army was immediately put to use, as the Georgians began to raid Shirwan and Armenia in 1120.

Although information on the relations between King David and the Franks of Outremer is scarce, chronicles do contain some details. Kartlis Tskhovreba mentions the vis its of envoys of King Baldwin II of Jerusalem to the Georgian court, which indicates a certain degree of cooperation between the two states. Certainly King Baldwin, hard pressed by the Muslims in Syria and Palestine, sought allies, and the military support of Christian Georgia would have been desirable for him. Georgian success in northeastern Asia Minor also diverted substantial Muslim forces from the hotly contested Holy Land. The presence of several hundred Franks in the Georgian army in 1121 further attests to close links between these Christian states.

The Muslim powers became increasingly concerned about the rapid rise of the Georgian state. In 1121, the Great Saljūq sultan Mahmūd (1118-1131) declared a holy war on Georgia and rallied a large coalition of Muslim powers, led by the Artūqid Najm al-Dīn Īlghazī. The massive Muslim army advanced toward the Georgian borders but, on 12 August 1121, King David, with a considerably smaller force, routed the enemy on the fields of Didgori, achieving what is often considered the greatest military success in Georgian history. This victory signaled the emergence of Georgia as a great military power and shifted the balance in favor of Georgian cultural and political supremacy in northeastern Asia Minor and Transcaucasia. In 1123-1124, King David’s armies expanded the Georgian sphere of influence to the neighboring territories of Armenia, Shirwan, and the north ern Caucasus.

A well-educated man, King David traveled with an extensive library that he constantly perused. He preached tolerance and acceptance of other religions. During David’s reign, the country enjoyed a revival in agriculture and industry and flourishing of cities. For his contributions, the grateful nation hailed King David as aghmashenebeli (reviver, rebuilder) and canonized him as a saint. He was buried in the gates of the Gelati monastery, where his tomb is still revered. King David also earned fame as the writer of Galobani sinanulisani, a powerful work of emotional free-verse psalms, which reveal the king’s humility and faith. He was succeeded by his son Demetre.

David the Builder’s policy continued under the reign of his son Demetre I and grandson Giorgi III. The Georgian kingdom expanded and several Armenian cities were incorporated. This expansion went hand in hand with certain political marriages: Giorgi III married the daughter of the king of Alania, his sisters mar ried the sultan of Rum and the prince of Kiev, and his daughters married the son of the Byzantine emperor and the prince of Suzdal.

Tamar, a daughter of Giorgi III, was the first female to become queen. She married Prince Yuriy Bogolyubskiy from Suzdal in 1185, but that marriage broke down after two years. Bogolyubskiy led a rebellion of western Georgian feudal lords against his former wife in 1191, but was crushed. In 1189, two years after her divorce, Tamar married again, this time the Ossetian prince David Soslan. During this period the Seljuk Turks launched numerous attacks on Georgia, but the Georgian forces won two major battles, in Shamkhor (1195) and Basiani (1203). In 1204 Tamar invaded Trebizond (contemporary Trabzon in Turkey) and founded the kingdom of Trebizond, which became a vassal of Georgia.

During the reign of Tamar, who is a saint in the Georgian Orthodox Church, Georgian power reached its zenith. Georgia not only embraced a huge part of the land between the Black Sea and the Caspian Sea – including the territories of modern-day Armenia, Azerbaijan, the Northern Caucasus, the north of Persia and northeastern parts of Turkey – it also made other neighbouring states its vassals. This was also a golden period in terms of culture, and during the reign of Tamar Shota Rustaveli wrote his famous poem The Knight in the Panther’s Skin.

King Giorgi IV Lasha succeeded his mother after her death in 1213, and Georgia became the major political and economic feudal monarchy in Asia Minor and the Caucasus. This golden age was brought to an end by the Mongol invasion of 1220. Giorgi IV Lasha died in 1223 and was succeeded by his sister Rusudan.

In the twelfth and thirteenth century, some of the Armenian nobility joined the Georgians and were able to take back a number of Armenian cities, such as Kars, Ani and Dvin, particularly under the reign of Giorgi III and Tamar.