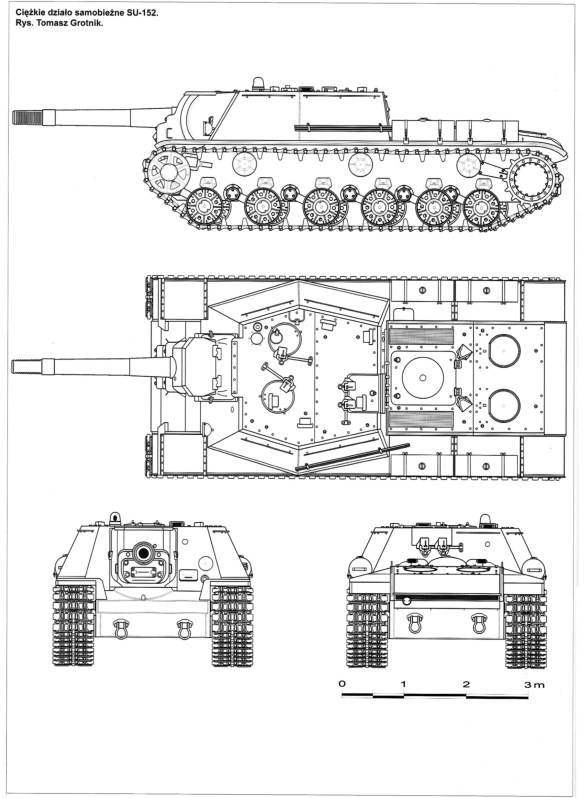 The weapon was a 152-mm (6-in) M-1937 howitzer mounted in a large and heavy mantlet on the front superstructure plate and there were roof hatches, one of which had provision for mounting an anti-aircraft machine-gun. This first vehicle was intended for use as much as an anti-armour weapon as a heavy assault weapon, for the Red Army made no differentiation between antitank and other weapons when it came to tactics. The SU-152 relied upon sheer projectile weight and power to defeat enemy armour.

The development of a larger assault gun tank destroyer which mounted the 152mm (5.98in) ML-20 gun was a direct reaction to the appearance of the German Tiger tank during fighting near the besieged city of Leningrad in January 1943. During 1942 the Central Design Bureau’s two teams (TsKB-2), led by veteran designer Lieutenant-Colonel Z. Kotin (responsible for the KV tank), had been developing a new heavy tank to replace the increasingly obsolete KV-1. This vehicle was termed KV-13 and was based extensively on the original chassis, but with a new hull and turret.

In late 1943, Kotin’s team’s new design would be the basis for the KV-85 and IS series of heavy tanks that would serve the Red Army to the end of the war. In early 1943 these new designs were still some way from completion, which was unacceptable to the GKO and the Army High Command, who saw the desperate need for quickly deploying an armoured vehicle capable of countering the Tiger. Rising to the occasion in just 25 days from receiving orders to proceed on 4 January 1943, Kotin and L. Troyanov completed two designs for self-propelled gun-tank destroyers.

The KV-12 mounted the massive 203mm (8in) B-4 Model 1931 howitzer, but lacking the range to engage the Tiger’s 88mm (3.46in) gun, the design was rejected. Instead the KV-14, built on a KV-1 ‘s chassis and equipped with the longer-range 152mm (5.98in) ML-20 gun-howitzer, was accepted for production on 14 February 1943 as the SU-152. With a muzzle velocity of 655m/s(2149ft/s), the SU-152’s gun was a formidable weapon, and was capable of penetrating 110mm (4.3in) of armour plate at a distance of 2000m (2187yd). The effectiveness of the gun was diminished by the need for a multi-component round that restricted fire to two shots a minute, while like most Soviet armoured vehicles’, the ability to actually engage targets at stated textbook ranges was restricted by the limited capability of the telescopic sights and quality of the crew. It is, however, important to note that ·in the long term, once the new heavy tanks entered service, the SU-152’s principal role was envisaged as being to serve as infantry support.

The first regiment to be equipped with the SU-152 was formed in May 1943 and, like the smaller SU-76i, was rushed to take part in the fighting at Kursk. Only 12 vehicles were available but they later claimed to have killed 12 Tigers and 7 Elephants (a heavily armoured self-propelled gun also making its debut at Kursk). These claims are difficult to substantiate; throughout the war, crews on both sides had a tendency to report any kill as the strongest tank which their opponents possessed in his arsenal. What is clear is that the SU-152 proved devastatingly effective in combat, quickly earning itself the nickname Zvierboy, (Animal Hunter), after its reputed ability to kill the entire German zoo of Tigers, Panthers and Elephants.

As the Red Army began to take the offensive in late 1942 the need for a heavy assault gun began to reassert itself. Development of such a weapon based on the chassis of the KV-1S heavy tank began immediately as the KV-14, and on 14 February 1943 it was accepted for service as the SU-152. Production began in March at Chelyabinsk. The SU-152 proved very popular in service. It’s 152mm HE round could demolish almost any strongpoint, and it could also fire an AP round that could knock out any German rank, although its chances of getting a hit at greater than 500-700 meters were marginal.

In fact, the vehicle proved so useful that when the KV series went out of production the concept was grafted on to the hull of its successor, the IS. A total of 704 units were manufactured.