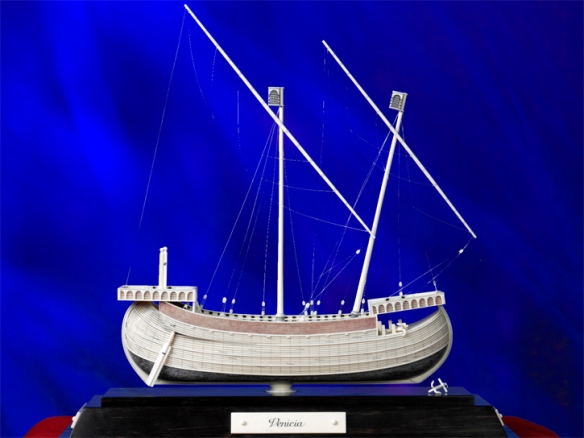 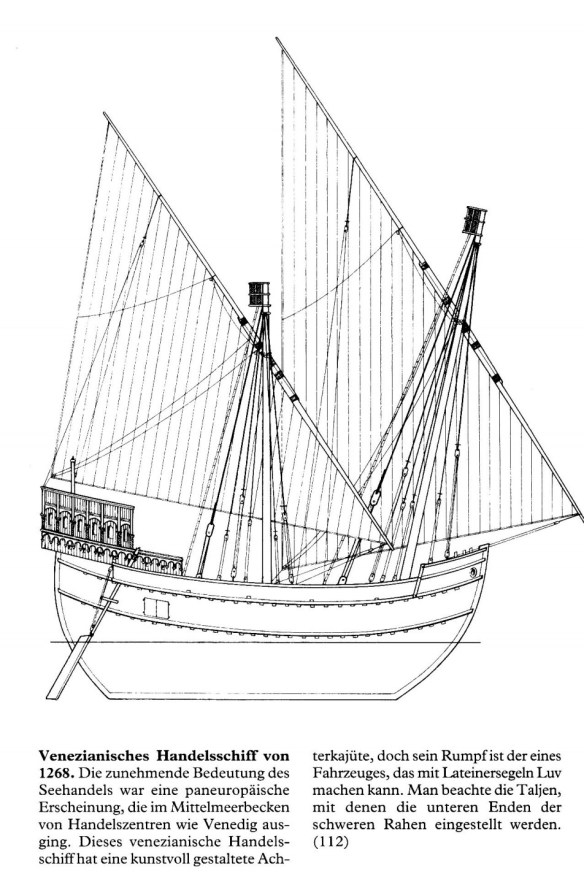 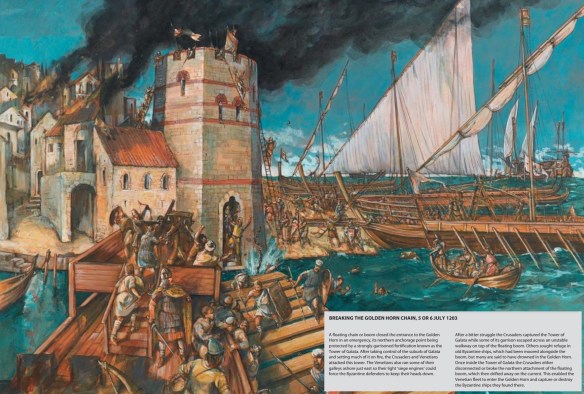 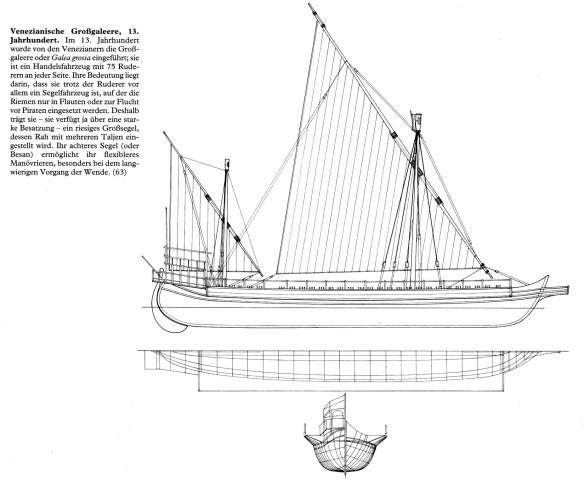 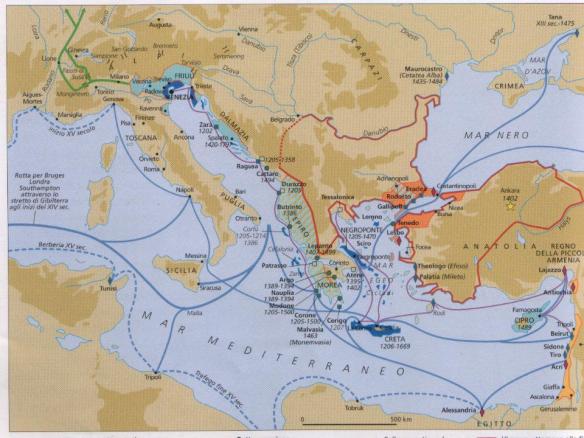 After the crushing defeat of the Franks of Antioch by the Turks at the Ager Sanguinis in 1119, the king and patriarch of Jerusalem requested assistance from Pope Calixtus II, who, preoccupied with the Investiture Controversy, passed the request on to Venice. In 1120 Doge Domenico Michiel (1118–1129) made an impassioned appeal to the people, who consented to a new crusade. Michiel suspended all overseas commerce while the Venetians prepared a fleet of approximately 120 major vessels. With the doge in command, it set sail on 8 August 1122, carrying more than 15,000 Venetian crusaders. During the winter, it tried without success to capture Corfu in retaliation for John II Komnenos’s refusal to renew Venetian trading privileges in the Byzantine Empire. The Venetian fleet arrived at Acre in May 1123, where it destroyed the Fatimid navy. The following year, the Venetians joined with the Franks to capture the coastal city of Tyre (mod. Soûr, Lebanon), which fell in July 1124. The Venetians were granted one-third of Tyre as well as a street, bakery, bath, and church in every city in the kingdom of Jerusalem. More than sixty years later, Doge Orio Mastropiero sent a large crusade fleet to join the Third Crusade (1189–1192), which took part in the siege of Acre.

Given a century of Venetian involvement in the crusades, it is not too surprising that Pope Innocent III turned to Venice for support when he proclaimed the Fourth Crusade (1202–1204) in 1198. The aged and blind Doge Enrico Dandolo (1192–1205) was inclined to support the crusade, but he pointed out to the pope that Venetian merchants were already paying a heavy price for the good of Christendom because of the ban on trade with Muslims. The pope responded by allowing the Venetians to trade in nonstrategic goods with Egypt. The failure of the Frankish crusaders to meet their commitments forced Dandolo to balance the good of the crusade against the enormous financial losses of the commune. The diversion of the crusade to Zara (mod. Zadar, Croatia) solved several problems, getting the expedition under way, providing a place to winter, and in part compensating the Venetians for their losses. But the attack on Zara, which was under papal protection, convinced Innocent that Dandolo and the Venetians had hijacked the crusade for their own purposes. He excommunicated all of the Venetian crusaders, although this was kept secret from the rank-and-file, including the Venetians.

The setbacks suffered by the Third Crusade did not dampen enthusiasm for crusading. The election of a youthful pope, Innocent III, in 1198 marked the beginning of a new effort to organize the crusade along more effective lines. Innocent, who was an able administrator, proclaimed his commitment to reform of the church and the crusade. In August 1198 Innocent called upon all Christian people to participate in a crusade. Times were not propitious for royal participation. The German Crown was in dispute. Philip II of France, who had repudiated his marriage to Ingeborg of Denmark, was under a papal interdict. Richard the Lionheart died in March 1199, to be succeeded by his brother John. By default, the crusade, which was received enthusiastically by many among the nobility, especially those whose families already had strong ties to the movement, found its leadership in their midst.

A seaborne expedition was planned in order to avoid the arduous journey overland and the attendant military risks. Agreement was reached with the republic of Venice to provide transport, which specified the number of crusaders (about 30,000) and the charges, as well as providing that the Venetians would themselves participate with fifty ships and would share equally in the conquest. The total price to the crusaders was 85,000 marks. There was also a secret codicil specifying that the goal of the crusade was to be Egypt: the main power base of the Ayyubids, Saladin’s successors, was increasingly seen as the key to the recovery of the Holy Land. The date for departure was set for late June 1202. Innocent ordered a general tax of a fortieth of all church incomes for one year and pledged that the Roman Church would pay a tenth of its income. He also issued a generous crusade indulgence to all who would take part in the crusade at their own expense.

The death of Count Thibaud III of Champagne deprived the crusade of its putative leader at a critical stage. His replacement was Boniface, marquis of Montferrat. Well connected to both the French and German royal houses, Boniface was a friend to one of the claimants to the German Crown, Philip of Swabia, who was married to a Byzantine princess, Irene. Her father, Emperor Isaac II Angelos, had been deposed and blinded by his brother, who had assumed the throne as Alexios III. Isaac’s son, also named Alexios, escaped and came to the West seeking aid to restore his father, but he found no support from Innocent III, who was already negotiating with Alexios III.

The crusaders began to gather in Venice during the summer of 1202. Yet many had decided on alternative routes, and the number that appeared at Venice was insufficient to raise the money needed to pay the Venetians for passage. After paying about 50,000 marks, almost 35,000 was still owed. The Venetians proposed that the crusaders should join them in retaking Zara (mod. Zadar, Croatia), a port on the Dalmatian coast, which had thrown off Venetian rule. The town was in the possession of King Emeric of Hungary, who had himself taken the crusade vow and was thus under the protection of the papacy. Despite the pope’s prohibition and internal divisions among the crusaders, the majority of the crusaders agreed to help the Venetians. The leaders also listened to the younger Alexios, who promised to solve their economic problems with the Venetians and to provide aid for the crusade in return for their support. Behind Innocent’s refusal to countenance this idea lay not only the fact that it represented a diversion of the crusade but also, in all likelihood, his hopes for cooperation with Alexios III and for a reunification of the Latin and Greek Orthodox churches.

Zara was captured after a short siege. Innocent’s attempt to punish the Venetians with excommunication was thwarted by Boniface of Montferrat, who delayed publication of the pope’s decree until the crusaders had moved on to Constantinople. There, the Venetians and their crusader allies met with quick success. After their initial attack on the city, Alexios III fled and Isaac was restored, with his son as coemperor. But it soon became clear that the newly crowned Alexios IV had promised more than he could deliver. As the winter of 1202–1203 came and went, the crusaders sought absolution from the pope and tried to persuade Alexios IV to further the reunification of the Greek and Latin churches. From the Greek side, however, opposition mounted, and Isaac II and Alexios IV were overthrown by a Greek nobleman, who seized the throne as Emperor Alexios V. The crusaders now decided to take the city: in April 1204 they breached the walls, and the great capital of the eastern Roman Empire fell. In the sack that followed, the riches of the empire were dispersed to the West. Religious relics found their way to Venice and to virtually every French homeland.

The Venetians and the crusaders had conquered not only the city of Constantinople but much of the European territory of the Byzantine Empire. Count Baldwin IX of Flanders was elected and crowned as emperor, to the disappointment of Boniface of Montferrat. For all practical purposes, the crusade was over. Only a few of the crusaders ever arrived in the Holy Land, and their presence there made no difference. Although some effort was made to view the con quest of Constantinople as a stepping-stone to further success, that expectation was doomed to disappointment. Reunification of the Latin and Greek churches, which had long proved to be elusive, was now still more remote. The energies of the crusaders and their supporters and an increasing amount of Western resources were devoted to defending and conquering lands and fending off the efforts of various Greek claimants to reconquer the empire. New Frankish principalities were established throughout Greece, but their existence did nothing to further the liberation of the Holy Land.

Even though the Greeks recaptured Constantinople in 1261, the restored Byzantine Empire was a shadow of its former self. Most of all, the events of 1204 gave rise to a deep distrust of the Latin West on the part of Greek Orthodox Christians that persisted for centuries and still finds its echoes today. Innocent III had suffered a severe setback in his dream of a successful crusade. He tried to make the best of things, but his letters reveal a bitterness, especially toward the Venetians, that never entirely receded. This experience undoubtedly helped shape the attitude of the pope to the crusade. It did not discourage him so much as act as a challenge. He would build on this experience.