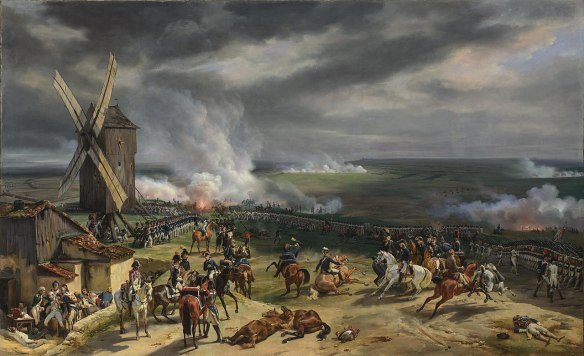 Painting of the Battle of Valmy by Horace Vernet from 1826. The white-uniformed infantry to the right are regulars while the blue-coated ranks to the left represent the citizen volunteers of 1791. 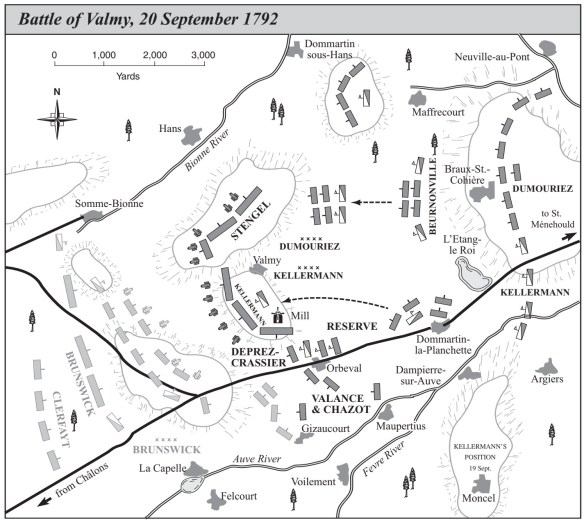 Important battle of the War of the First Coalition (1792- 1797), usually identified as one of the decisive battles in world history. In July 1792 an Allied Austrian and Prussian force assembled at Coblenz in the Rhineland with the aim of marching on Paris, rescuing King Louis XVI, and crushing the French Revolution. Charles William (Karl Wilhelm), Duke of Brunswick, had command. Although accounts vary, the invasion force probably numbered about 84,000 men: 42,000 Prussians, 29,000 Austrians, 5,000 Hessians, and 8,000 French émigrés. The invaders planned a movement in which the main force under Brunswick, accompanied by Prussian King Frederick William II, would be protected on its flanks by two Austrian corps, one each to the north and south. The attackers planned to move west between the two principal French defending armies: the Armée du Nord under General Charles François Dumouriez (from 16 August) and the Armée du Centre under General François Etienne Christophe Kellermann (after 27 August). Once the invaders had taken the poorly provisioned French border fortresses, they could move to Chalons, and from there they would have fertile and open territory to Paris.

The Allied invasion of France began in late July and moved at a leisurely pace. On 19 August the Allies crossed the French frontier. Longwy fell on 23 August and Verdun on 2 September. With the fall of the two fortresses, the way to Paris seemed open. Brunswick’s forces then moved into the thick woods, narrow defiles, and marshy lowlands of the Argonne, terrain that favored the defender. Torrential rains aided the French, playing havoc with Brunswick’s lines of communication, and dysentery felled many men.

The government in Paris ordered Dumouriez, who believed the best way to thwart the invasion would be to invade the Austrian Netherlands, to move south and block Brunswick. On 1 September, along with the bulk of his army, he moved from Sedan and took up position in the passes of the Argonne. Although Dumouriez’s men fought well and bought valuable time, Brunswick’s troops took a lightly defended pass at Croix-aux-Bois, turning the French. Dumouriez then withdrew to Sainte-Manehould and Valmy, where he could threaten Brunswick’s flank. Kellermann joined him at Valmy south of the river Bionne on 19 September. The village of Valmy lay between hills to its north, west, and south.

The French generals had planned to withdraw farther west, but the appearance of Brunswick’s army early on the tenth from the north had cut off that route. Brunswick was now closer to Paris than were Dumouriez and Kellermann, but he needed to remove the French threat to his supply lines, and he had only about 30,000-34,000 men to accomplish this. Dumouriez’s exhausted force of 18,000 men formed a second line east of Valmy. Kellermann commanded the first French line of some 36,000 men, drawn up along a ridge topped by a windmill just west of Valmy. Kellermann’s force consisted of an equal mix of trained prewar soldiers and untrained but enthusiastic volunteers. Among French officers on the field that day was young Louis-Philippe, later king of the French.

Early morning fog on 20 September soon dissipated, and once he had identified the French positions, Brunswick positioned his own men on high ground some 2,500 yards to the west and prepared to attack. Brunswick had fifty-four guns; Kellermann only thirty-six. Brunswick was confident of victory, for his troops were far better trained.

The “Battle” of Valmy of 20 September was more a cannonade than anything else. It opened that morning when King Frederick William ordered the Prussian guns to bombard the French positions prior to an infantry assault. The French artillery, well handled by men of the preRevolutionary army, replied. A distance of some 2,500 yards between the two sides and soft ground from recent heavy rains meant that the exchange of fire inflicted little damage on either side. Nonetheless, the Prussians had expected the green French troops to break and run at the first volley and were amazed when they stood their ground.

The Prussian infantry then began an advance as if on parade across the soggy ground. Perhaps Brunswick hoped the French would bolt, but when they failed to do so, he halted his troops after about 200 yards. One French battalion after another took up the cry of “Vive la nation!” About 2:00 P. M. a lucky hit from a Prussian shell exploded an ammunition wagon near the windmill, and the French guns momentarily fell silent; then the battle resumed. Brunswick ordered a second advance, but his men got no farther than about 650 yards from the French. Brunswick then ordered a halt, followed by a retirement. At 4:00 P. M. he summoned a council of war and announced, “We do not fight here.”

Losses on both sides were slight: The Prussians lost 164 men, the French about 300. Brunswick had not been enthusiastic about the offensive that culminated at Valmy. He had wanted only to secure positions east of the Argonne in preparation for a major campaign the following spring. The movement farther west had been at the insistence of the king, and Brunswick now used the rebuff as an excuse to halt the offensive. The dispirited Prussian forces lingered in the area for ten days, but on the night of 30 September-1 October they broke camp and withdrew, recrossing the French border on 23 October.

Although, even had he won at Valmy, Brunswick would probably not have immediately moved against Paris, the battle ended any Allied hopes of crushing the French Revolution in 1792. The government in Paris then authorized Dumouriez to carry out his plan to conquer the Austrian Netherlands, and on 6 November forces under his command defeated the Austrians at Jemappes.

The Battle of Valmy marked the recovery of the French Army from its disastrous state early in the Revolution. It was important not only as a military and political event but also as marking the end of the age of dynastic armies with no stake in, nor understanding of the political purpose of, wars being fought, and the arrival of the new age of patriotic “national” armies. The poet Johann Wolfgang von Goethe, who was present that day, understood this. When some Prussian officers asked him what he thought of the battle, he reportedly replied, “From this place, and from this day forth, commences a new era in the world’s history; and you can all say that you were present at its birth” (Creasy 1987, 179).