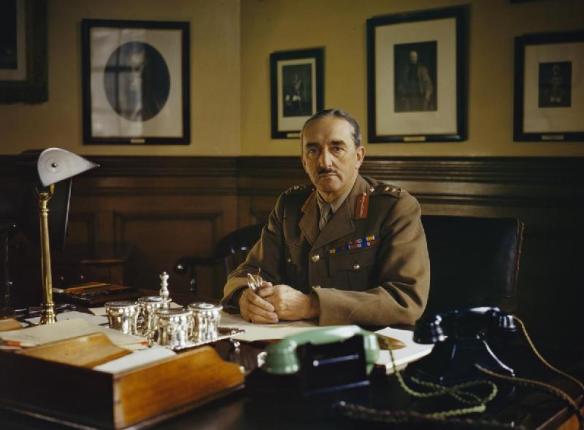 Considered a master strategist, Alan Francis Brooke(1883-1963) was instrumental in orchestrating the victory of Allied forces in the Second World War. As chief of the Imperial General Staff, Brooke was the chief military spokesman for the British government and the Allies. Born on July 23, 1883, in Bagneres de Bigorre, France, Alan Francis Brooke was the sixth son and ninth child of Sir Victor Brooke, third baronet of Colebrooke in county Fermanagh, and Alice Bellingham Brooke, second daughter of Sir Alan Edward Bellingham, third baronet, of Castle Bellingham in County Louth. Both parents belonged to the Protestant Ascendancy class in Ireland. The Brookes of Colebrooke had fought for the British Crown from before 1641. His ancestor, Sir Henry Brooke of Donegal, was awarded 30,000 acres of Fermanagh for his part in suppressing the native uprising in Ireland. As his mother preferred sunny southern France to the Irish climate, Brooke was raised near Pau, in southern France. His father died when he was eight years old. Brooke was privately educated and spoke fluent French and German before he mastered English. He was also an excellent horseman, hunter, and fisherman.

At the age of eighteen, Brooke entered the Royal Military Academy at Woolwich, a traditional English school. He was shy, delicate and introspective, but did well enough to follow the family tradition by embarking on a military career. Brooke joined a battery of Royal Field Artillery in Ireland in 1902. His first four years were spent in Ireland. In 1906, he joined the prestigious Royal Horse Artillery. Three years later, he was sent to India, where he proved to be a highly efficient officer-considerate of his men and kind to his horses. Brooke was well liked and considered to be quick-witted and amusing. He was a gifted draftsman and caricaturist, and a skilled mimic. His hobbies in India were big-game hunting and horseracing. Brooke married Jane Richardson, daughter of Colonel John Richardson, in 1914. He had one son and one daughter from this marriage. His wife died after an auto accident in 1925.

Distinguished Service in World War I

During World War I, Brooke was commanding Canadian and Indian artillery units on the western front. He fought in the battle of the Somme and introduced the French “creeping barrage” system. It ensured that the ground between the enemy’s trench lines was covered and minimized the amount of exposure by advancing infantry to machinegun fire. Brooke’s work was considered to be outstanding in all engagements and, by 1918, he was a brevet lieutenant colonel and was awarded the Distinguished Service Order and bar.

After the war, Brooke was sent to the Staff College at Camberley and later became an instructor there. In 1929, he married Benita Lees, daughter of Sir Harold Pelly and widow of Sir Thomas Lees. This second marriage brought a calming influence to his high strung temperament and was a source of strength, especially during World War II. Brooke kept a diary that he intended to be read only by his wife. The diary later provided material for several books including Arthur Bryant’s The Turn of the Tide, 1939-1943 and Triumph in the West, 1943-1946. By 1929, he was commandant of the School of Artillery. He also attended the Imperial Defense College, and later returned as an instructor. In the 1930s Brooke commanded first an infantry brigade, and later a mobile division-which foreshadowed the armored divisions of World War II. He was promoted to lieutenant-general and placed in charge of Britain’s antiaircraft corps and eventually the entire anti-aircraft command. Brooke was responsible for organizing and expanding this division and preparing it to meet the ominous growth of the German Luftwaffe. In this undertaking, he worked closely with Air Marshall Sir Hugh Dowding.

In August 1939, Brooke was made commander-in-chief of the Southern Command and sent to lead the Second Army Corps of the British Expeditionary Force (BEF). The following month, he moved to the Franco-Belgian frontier with his untrained and poorly equipped troops. As they took up their positions during a lull in the fighting, Brooke tried to get his soldiers into the best condition he could. Despite his efforts, he still believed that his men were not well equipped and not trained as well as they needed to be. Brooke felt that French morale was weak and that Gort, the commander-in-chief, was not a good military strategist. The Allied forces were isolated in northern France and Belgium and fell back to the sea at Dunkirk. When the Belgians surrendered the British Expeditionary Force retreated. Brooke was forced to turn over command of his troops on the beach at La Panne and returned to England.

The British Prime Minister, Winston Churchill, asked Brooke to return to France in order to bolster the fighting forces. He arrived in Cherbourg and soon concluded that the French had lost their will to fight. Brooke realized that England did not have enough troops to defeat the vastly superior German forces. He convinced Churchill to withdraw nearly 140,000 British troops before it was too late.

Guided the Allies to Victory

In July 1940, Brooke was put in charge of the home forces and worked out plans to defeat a German attack on England. The Royal Air Force won its battle for air supremacy and the Germans postponed their invasion. In December 1941, Japanese forces bombed the American naval base at Pearl Harbor, Hawaii. As a result, America joined the conflict and Japan attacked British positions in the Pacific. Churchill asked Brooke to become Chief of the Imperial General Staff (CIGS) in late 1941. In this position, Brooke proved to be most effective. Churchill had a strong-willed personality and tended to set unrealistic goals. Brooke was able to keep Churchill restrained until the Allies had sufficient troop strength to defeat the Germans. He persuaded Churchill to send Field Marshal Sir John Dill to Washington, as head of the British military mission. Dill was able to smooth out many difficulties between the Americans and the British. Brooke was himself able to use common sense in his dealings with Britain’s allies. The Americans wanted to invade France from England in the fall of 1942 by crossing the English Channel. He convinced them that it was necessary to weaken the Germans by fighting in Africa and Russia before such an invasion could succeed. He also believed that the war in Europe must be won before dealing with the Japanese. Therefore, his strategy required liberating North Africa and Italy, while conducting a saturation bombing campaign against the Germans in order to weaken their will and ability to continue the war.

Brooke spent most of 1943 at Churchill’s side defending the British point of view at conferences in Casablanca, Washington, Quebec, Moscow, Cairo, and Teheran. Though he admired Churchill, Brooke wrote in his diary that he was the most difficult man with whom he had ever worked. His role was to turn Churchill’s visionary ideas into military realities. The two men made a great team. Churchill was the stocky fiery politician while Brooke, the aloof, strong-willed field marshal with a lean, athletic figure and closely trimmed mustache, created the balance. Brooke was able to maintain cordial relations with the leaders of the Allied forces, including Stalin. He did not trust Stalin but knew that his forces were needed in order to keep the Germans occupied and away from Britain. The American president, Franklin Roosevelt and General George Marshall, both respected him. Marshall described Brooke as being determined in his position, but agreeable to negotiation, open minded, and a delightful friend.

In January 1944, Brooke was promoted to field marshal. His staff drew up plans for the invasion of Normandy. Brooke desperately wanted to lead the invasion, but agreed that the American general, Dwight Eisenhower, should be given this role since most of the troops were American.

Selecting the right officers to lead men into battle is an important responsibility, and Brooke demonstrated unerring good judgment. Men like Bernard Law Montgomery and Harold Rupert Alexander may have gotten the most acclaim, but the fact was that he chose them and they reported to him. Brooke was considered to be a tower of strength, a man whose inner power radiated confidence. All were glad that he was the one in charge. After the war was won, Brooke received many honors: he was named Baron Alanbrooke in 1945 and Viscount Alanbrooke in 1946. In addition, he was Knight of the Garter, Royal Order of Merit, most distinguished member of the Royal Regiment of Artillery, and Master Gunner of St. James’s Park, all in 1946. The governments of Poland, Belgium, France, Denmark, Czechoslovakia, Greece, Portugal, Ethiopia, the Soviet Union, and Sweden honored him for his service in World War II.

After retiring from active service, Brooke devoted himself to his love of ornithology. He was president of the London Zoological Society from 1950 to 1954. He also became a director of the Midland Bank and sat on the boards of numerous companies. On June 17, 1963, Brooke died at his home in Hartley Wintney, Hampshire, England. Researchers interested in the inner working of the British command during World War II, still turn to his journals for insight into the decision-making processes. Marshall and Eisenhower may have finished the war, but Brooke laid the foundation for their efforts.