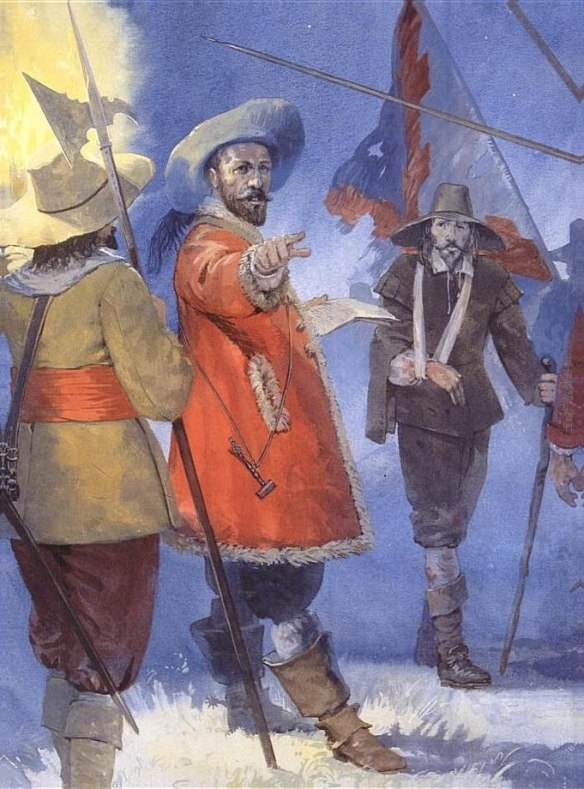 The deteriorating situation throughout 1619 at least encouraged Ferdinand’s potential supporters to accept his appeals as serious. The Habsburg monarchy was at breaking point. Ferdinand found himself with 20 million florins of debts on his accession. Crown revenue was only 2.4 million, but much of this was now controlled by the rebel Estates whose taxes, worth 3 million fl. annually, he was also denied. The imperial army consumed 5 million fl. in pay, provisions and munitions in the ten months to June 1619, whereas revenue, forced loans and Spanish and papal subsidies provided just 3 million. When pay arrears and other liabilities were included, the military deficit reached 4.3 million fl., in addition to the monarchy’s existing debt.

Ferdinand might struggle on with further expedients, while the Poles might yet eliminate Bethlen, but he could never defeat all his opponents without substantial additional help. From his imperial coronation he launched a concerted effort to secure this. Spain, France and the papacy were approached for cash and diplomatic assistance in deterring the Protestant Union from intervening, while Bavaria and Saxony were asked to provide direct military support.

Duke Maximilian saw his chance to achieve his long-cherished ambitions. He ignored Habsburg appeals for help throughout 1618 while quietly preparing to re-establish the Liga they had forced him to disband. Frightened by the Bohemian crisis, the former members welcomed the chance to strengthen their security. Maximilian was careful not to show his hand, allowing Mainz to take the lead in reviving the organization that was essentially active again from August 1619. Ferdinand’s visit to Munich in October on his way back from Frankfurt and his election enabled Maximilian to move to stage two, seeking not merely confirmation for the Liga but the promise of concessions at the Palatinate’s expense. The growing crisis at Vienna forced Ferdinand to accept ‘the Bavarian devil to drive out the Bohemian beelzebub’. In the Treaty of Munich of 8 October 1619, Ferdinand recognized the Liga and requested its assistance, thereby establishing the legal basis for all future Bavarian action. As the emperor’s auxiliary assisting to restore the imperial public peace, Maximilian was entitled to proper compensation. Though the entire Liga would assist, only Bavaria’s expenses were covered, in a separate arrangement that promised the duchy part of Austria until Ferdinand could repay Maximilian.

The Liga met in Würzburg in December, its first congress since 1613, and agreed to raise an army of 25,000 funded by members’ contributions. The previous organization was re-established, with south German and Rhenish Directories under Bavaria and Mainz respectively. Membership was exclusively Catholic and predominantly ecclesiastical, as the smaller imperial counties and cities abstained or only participated intermittently. Salzburg learned from Raitenau’s fate in 1611 and cooperated, but still refused formal membership. Maximilian secured exclusive direction of the Liga’s military affairs, underpinned by his efficient bureaucracy and Jean Tserclaes Tilly as an experienced field commander. Mainz declined to replace Bavaria when Maximilian’s term of office expired at the end of 1621, leaving the duke in charge of the general direction of the Liga throughout its remaining existence. Ferdinand of Cologne, Maximilian’s brother, refused to join, but nonetheless cooperated with the Liga and became the real head of the Rhenish members.

For Maximilian, war was a demonstration of power (potestas), not violence (violentia). He had himself painted as a warrior prince in full armour, but had little interest in personal glory. He dutifully accompanied his army in 1620, but left actual command to Tilly in whom he had complete trust. Operations were to be the legally sanctioned, controlled application of force for precise objectives. He refused to move until the emperor took the necessary steps to sanction Bavarian intervention and provide cast-iron guarantees that Maximilian would receive his reward. Ferdinand had already annulled Frederick’s election as Bohemian king on 19 January 1620. At Maximilian’s insistence, he issued an ultimatum to surrender the crown by 1 June or face the imperial ban. This would make Frederick an outlaw, entitling the emperor to confiscate his possessions and reassign them to whoever he chose. Five days after the deadline expired, Ferdinand authorized Maximilian to intervene in Bohemia, which he followed by a similar mandate on 23 July against the Upper Austrian rebels.

With typical caution, Maximilian sought additional confirmation from Spain and the papacy. Frederick’s acceptance of the Bohemian crown finally convinced the pontiff that the situation was serious and he doubled his existing subsidy to the emperor. In all, Pope Paul V sent 380,000 florins between 1618 and 1621, equivalent to a mere single month’s pay for the imperial army. He proved more generous towards Maximilian, because the Liga’s existence allowed him to prove his Catholic credentials without directly assisting the Habsburgs. However, he refrained from digging into his own pockets, imposing instead a special levy on the German and Italian clergy that raised 1.24 million fl. across 1620–4. Contributions from the Liga’s other members in the same period totalled 4.83 million, while Paul spent more than six times as much on building projects and nepotism. For him, this clearly was not a religious war.

The approach to Spain had rather more significant consequences. Maximilian generally opposed Spanish involvement, but needed it now. He could not move against the Austrian and Bohemian Confederates without exposing the Liga territories to potential reprisals from the Protestant Union forces. Spanish intervention on the Rhine would pin these down and free the Liga army under Tilly to turn eastwards. Spain had been slow to respond to the situation after Emperor Matthias’s death because this coincided with a long-planned state visit to Portugal intended to bolster the monarchy. Absent since April 1619, Philip III fell ill on his return in September and never fully recovered. Many still opposed intervention in Germany, but Frederick’s acceptance of the Bohemian crown was considered such an affront to the Casa d’Austria that it could not go unpunished.

The complex nature of Spanish involvement takes some unravelling. Just over 2 million florins were sent in 1619–21 to subsidize the maintenance of the imperial army and help pay the Polish Cossacks. Imperial officers were allowed to recruit new units in Spanish possessions, chiefly 6,000 Walloons raised after January 1619. Some additional help came from Spain’s Italian allies, notably the grand duke of Tuscany who financed Dampierre’s regiment of Germans and Walloons whose arrival in the Hofburg so startled the Lower Austrians. Other units were sent directly under Spanish command and pay, though many of these were newly recruited since the monarchy had only about 58,000 soldiers at this point. Like Bavaria, Spain presented its involvement as upholding the imperial constitution. The first column of 6,000 foot and 1,000 horse under Marradas and Johann VIII von Nassau marched from the Netherlands as ‘Burgundian Kreis troops’, ostensibly fulfilling the region’s obligations under the public peace legislation. They deliberately avoided Union territories as they crossed from Alsace to Passau and thence to join Bucquoy in Upper Austria in July 1619. A second column of 7,000 Italians crossed the St Gotthard pass and moved down the Etsch valley to reach Innsbruck on 15 November 1619. Four thousand continued down the Rhine to bring the Army of Flanders back up to strength, leaving only 3,000 under Verdugo and Spinelli to march north over the Golden Track into Bohemia in January. A third column of 9,000 Spanish and Italians marched north from Italy later in 1620, but were sent along the Chérzery valley to reinforce the Army of Flanders. This was the last use of the western stretch of the Spanish Road that had become too exposed through Savoy’s defection to France. It was part of a wider strategy to rebuild Spain’s offensive capacity as the Twelve Year Truce with the Dutch neared its end, and by June 1620 the Army of Flanders mustered 44,200 foot and 7,000 horse.

Failure of Saxon mediation forced Johann Georg to change tack and join Ferdinand in the hope his participation would keep the crisis contained to Bohemia. He used his influence in the Upper and Lower Saxon Kreise to frustrate efforts by Union activists to recruit troops, though he was unable to prevent his Ernestine relations in Thuringia from sending several units to Bohemia. The elector of Mainz and Maximilian refused to drop demands that the Protestants return church land taken since 1552, but they did compromise with Saxony and Hessen-Darmstadt at a meeting in Mühlhausen in March 1620. Johann Georg accepted Bavaria’s interpretation that Frederick had broken the public peace. In return, Bavaria and Mainz promised not to use force to recover the former bishoprics, provided their current Lutheran administrators remained loyal to the emperor.

Maximilian pressed Ferdinand to complete the process and place Frederick under the imperial ban in March, but backed away once he realized this was blatantly exposing his ambitions to supplant his cousin as elector. It was agreed to wait until a clear victory established a more suitable opportunity. Ferdinand also addressed Johann Georg’s concerns over the legitimacy of Saxon intervention by specifically commissioning him in April 1620 to restore order in Lusatia. The commission was revised in June at his request to include special safeguards for the Lutheran inhabitants, while a month later Ferdinand agreed Saxony could retain both parts of Lusatia until he could refund its expenses.

Neutralization of the Union removed the final obstacle to action. Another Union congress in June 1619 had authorized the mobilization of 11,000 men for home defence. The activists agreed privately to raise more but had still only mustered 13,000 under the margrave of Ansbach at Ulm in May 1620, having failed to intercept the Spanish reinforcements. They had been completely out-recruited by the Liga, now massing 30,000 troops opposite them at Lauingen and Günzburg. Nonetheless, Maximilian wanted to be sure the Union would not attack once Tilly headed east into Bohemia. Talks opened on 18 June with the intention of avoiding violence altogether in Germany, and France finally intervened as Louis XIII sent the duc d’Angoulême to mediate. Ferdinand had sought French support, claiming that, like the Huguenots, the Bohemians represented a religious and political threat to Catholic monarchy; however, Louis rejected the call for solidarity in favour of asserting what he regarded as his country’s proper role as European arbiter. With Angoulême’s assistance, the Liga and Union agreed a truce on 3 July, promising not to fight each other in Germany but leaving Maximilian free to intervene in Bohemia, while the Union activists could oppose Spain if they wished. Angoulême hoped to extend this into a general peace, but Ferdinand seized the opportunity to attack.