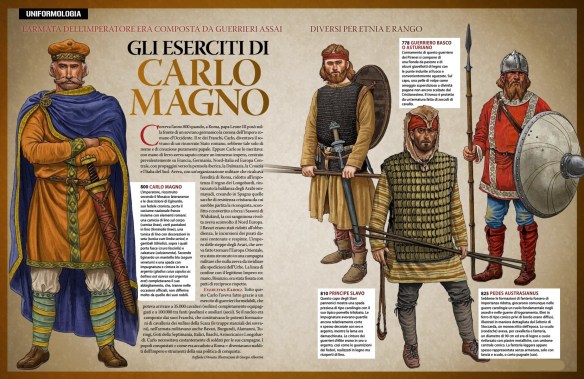 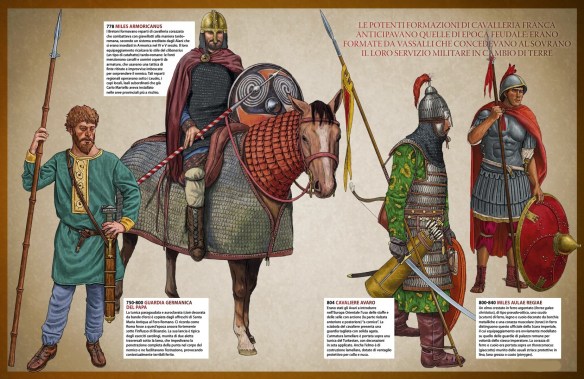 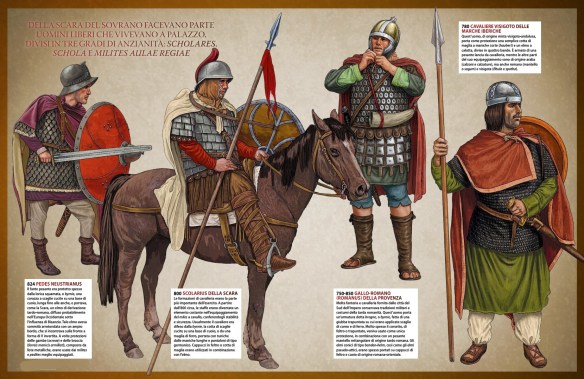 The composition and equipment of Charlemagne’s army was continuously evolving. Initially, the Carolingian Army was composed mostly of infantry, but as campaigning took him farther and farther from his base in Austrasia, Charlemagne soon relied increasingly on mounted troops rather than infantry. His numerous capitularies point to the raised status of cavalry. During 792-793 he issued regulations requiring vassals to have a horse, shield, lance, sword, dagger, bow, quiver, and arrows. In other royal decrees wealthier nobles were ordered to come to war wearing mail and were asked to bring rations for three months of service and clothing for six. Furthermore, these greater magnates were to make certain that their own vassals came on campaign with a standardized panoply consisting of shield, spear, bow, and 12 arrows. Even attendants were required to be armed with bows.

During his 46-year reign between 768 and 814, Charlemagne undertook an unprecedented 54 military campaigns, greatly expanding the territory of the Frankish kingdom. And even though the Frankish army was relatively small compared to armies of the Classical Period (modern estimates vary from 5,000 to 35,000 men, excluding attendants), it was sufficient to carve out the largest state that western Europe had seen since the fall of the western Roman empire some 300 years earlier. His impressive military and political achievements even won him the title of “emperor of the Holy Romans” from the papacy on Christmas Day 800 CE.

Charlemagne’s campaigns took him to many areas in Europe. In 773 he led his army into Italy, crushing the Lombards and crowning his son king of Italy. Four years later Charlemagne crossed the Pyrenees into northern Spain. This campaign proved disappointing. Despite the annihilation of his rear guard at Roncesvalles by the Basques in 778, Charlemagne and his successors were successful in eventually establishing the Spanish March, a string of fortifications in Catalonia that served as a defensive bulwark against Muslim raiding and a future base of operations for the Christian reconquest of Spain in the eleventh century.

Charlemagne was more successful in his eastern campaigns into Germany. In 787 he invaded Bavaria and brought that region under his rule. In 790 his Frankish armies marched east along the Danube and met and utterly eradicated the Avar empire in the Balkans, seizing wealth accumulated in two centuries of raiding and adding it to his own treasury. Perhaps Charlemagne’s greatest success came in Frisia and Saxony, a region in northern Germany between the Rhine and Elbe rivers. Beginning in 772 Charlemagne set his sights on the conquest and conversion of these regions, but resistance was fierce (Charlemagne campaigned in Saxony in 772, 785, 792- 793, and 798-803). It was not until 804, after 18 annual campaigns, that Saxony was finally pacified and added to the Carolingian domain.

Charlemagne never developed a regular standing army; instead, he relied on feudal levies to raise his forces. It did not take the emperor long to assimilate new regions into his military machine. Just two years after bringing Saxony into the kingdom, Charlemagne created a sliding scale of military contributions, ordering five Saxon vassals to equip a sixth to campaign in Spain and two to equip a third for Bohemia, while all were required to campaign against regional threats. In 807 he issued a capitulary decreeing that all nobles in the realm holding a benefice (a lease of land) were obligated to military service. If a noble failed to muster for war, he risked the confiscation of his estate. Charlemagne perfected this system to the point where he could raise several annual levies and conduct operations on multiple fronts, including Germany, Bohemia, Brittany, and Spain.

Charlemagne’s military success was not founded on the decisive engagement; indeed, history records him present at only three battles during his lengthy reign. The Carolingian emperor’s success was instead based on a well-trained and experienced feudal fighting force wearing down the enemy through a strategy of attrition and the ability to raise several armies for annual campaigns in different regions. He also recognized the impending threat to his empire, building and garrisoning forts along his borders with the Muslims, Danes, and Slavs. He even went so far as to try to maintain his superiority in military equipment by threatening the forfeiture of all property to anyone selling mail hauberks to foreigners and death to any who exported Carolingian swords out of the country.

Finally, perhaps Charlemagne’s greatest military legacy was his emphasis on cavalry as an instrument of strategic mobility. And although the stirrup-stabilized lancer, probably present in limited numbers during Charlemagne’s reign, did not revolutionize battle tactics in the late eighth and early ninth centuries, heavy cavalry’s importance as the centerpiece of the Carolingian tactical system was a harbinger of how war would be made in the later medieval period.

2 thoughts on “Wars of Charlemagne”