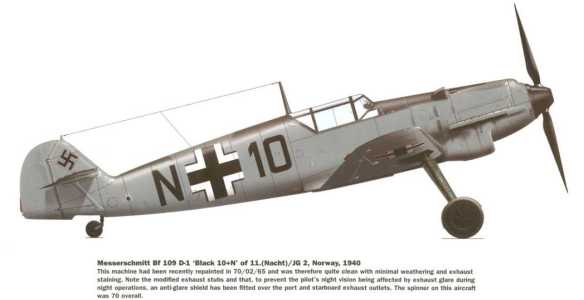 Serious losses finally convinced the Air Staff that a profound change of its daylight policy was necessary. Following heavy Wellington and Blenheim losses in daylight the elderly Whitley squadrons were immediately employed in night leaflet dropping operations and made no appearance in daylight at all. When RAF Bomber Command took the decision in May 1940 to start strategic bombing of Germany by night, there was little the Luftwaffe could do to counter these early raids. The subject of night fighting was raised at a conference of German service chiefs just before the war and according to Kommodore Josef Kammhuber who was present at the conference it was dismissed out of hand by Hermann Göring with the words, ‘Night fighting! It will never come to that!’

Up until May 1940 the night air defence of the Reich was almost entirely the province of the flak arm of the Luftwaffe. No specialised night fighting arm existed though one fighter Gruppe (IV./(N)JG2) was undertaking experimental ‘Helle Nachtjagd’ (illuminated night fighting) sorties with the aid of searchlights in northern Germany and in the Rhineland. IV./(N)JG2 flew the Bf 109D with the cockpit hood removed as a precaution against the pilots being blinded by the glare of the searchlights.

On the night of 25/26 April Oberfeldwebel Hermann Förster of the 11th Staffel NJG2 shot down a Hampden on a mine-laying operation near Sylt, the first Bomber Command aircraft to be shot down by a fighter at night. The aircraft was L1319 on 49 Squadron. Pilot Officer Arthur Herbert Benson and crew were killed. Forster went on to claim two Fokker G.Is in Raum (‘Box’) ‘Rotterdam’ on 10 May and Hampden P4286 on 44 Squadron at Oosterhout on 14/15 May. Pilot Officer Leslie James Ashfield and his crew were killed. On 24 May Förster destroyed a Blenheim at Borkum. Förster also claimed Hampden I P1178 on 83 Squadron at Often near Aachen on 3/4 June. Flying Officer Francis John Haydon and crew were killed. On 9 July he destroyed a Whitley twenty kilometres north of Heligoland. Forster joined 2./JG27, scoring another six daylight victories. Hermann Förster was killed in action on 14 December 1941 flying with JG27 Afrika in North Africa. His last victory was on 10 December when he shot down a Boston III fifteen kilometres east of Bir Hacheim to take his final total to twelve Abschüsse.

On 22 June 1940 Hauptmann Wolfgang Falck, Kommandeur, I./ZG1 who had some experience with radar-directed night-fighting sorties in the Bf 110 flying from Aalborg in northern Denmark that April, was ordered to form the basis of a Nachtjagd, or night fighting arm, by establishing the first night fighter Gruppe, I./NJG1. While at Aalborg Falck had prepared a comprehensive tactical appraisal report on night interception. Thus after I./ZG1’s participation in the Battle of France General Albert Kesselring ordered Falck to take his unit to Düsseldorf and reform for the night fighter role. On 26 June Falck was appointed Kommodore of NJG1 and IV./(N)JG2 was incorporated into the first Nachtjagd Geschwader as III./NJG1. From Düsseldorf airfield Bf 110s and Do 17Zs of NJG1 undertook experimental night-fighting sorties in defence of the Ruhr with the aid of one flak searchlight regiment. In July the creation of a true night air defence for the Third Reich was dramatically accelerated when Göring ordered Josef Kammhuber to set up of a full-scale night fighting arm. Within three months, Kammhuber’s organisation was remodelled into Fliegerkorps XII and by the end of 1940 the infant Nachtjagd had matured into three searchlight battalions and five night fighter Gruppen.8 Major Falck received the Ritterkreuz in October 1940. He was to command NJG1 for three years and in partnership with General Josef Kammhuber develop a highly effective night fighter force.

Kammhuber organized the night fighting units into a chain known to the British as the ‘Kammhuber Line’, in which a series of radar stations with overlapping coverage were layered three deep from Denmark to the middle of France, each covering a zone about 32 kilometres long (north-south) and twenty kilometres wide (east-west). Each control centre or zone was known as a ‘Himmelbett’ (literally translated, ‘bed of heavenly bliss’ or ‘four-poster bed’ because of the four night-fighter control zones), consisting of a ‘Freya’ radar with a range of about 100 kilometres, a number of searchlights spread through the cell and one primary and one backup night fighter assigned to the cell. RAF bombers flying into Germany or France would have to cross the line at some point and the radar would direct a searchlight to illuminate the aircraft. Once this had happened other manually controlled searchlights would also pick up the aircraft and the night fighter would be directed to intercept the now-illuminated bomber. However, demands by Bürgermeisters in Germany led to the recall of the searchlights to the major cities.

Later versions of the ‘Himmelbett’ added two Würzburg radars, with a range of about thirty kilometres. Unlike the early-warning ‘Freya’ radar, Würzburgs were accurate (and complex) tracking radars. One would be locked onto the night fighter as soon as it entered the cell. After the Freya picked up a target the second Würzburg would lock onto it, thereby allowing controllers in the ‘Himmelbett’ centre to obtain continual readings on the positions of both aircraft, controlling them to a visual interception. To aid in this, a number of the night fighters were fitted with a short-range infrared searchlight mounted in the nose of the aircraft to illuminate the target and a receiver to pick up the reflected energy known as ‘Spanner’ or ‘Spanneranlage’ (‘Spanner’ installation) literally translated, a ‘peeping Tom’. ‘Spanner I’ and ‘Spanner II’, a passive device that in theory used the heat from engine exhausts to detect its target, were not very successful.

Nachtjagd’s first official victory over the Reich was credited to Oberfeldwebel Paul Förster of 8./NJG1 when off Heligoland at 0250 hours on 9 July he destroyed Whitley V N1496 on 10 Squadron at Dishforth. Flight Lieutenant D. A. Ffrench-Mullen and his four crew who were on a bombing operation to Kiel, survived and were taken prisoner. Förster was a former soldier who trained as a pilot in 1936 and as a Zerstörer pilot he scored three day victories in 1940. After he was shot down and wounded he was assigned to the role of flying instructor and later served as a staff officer. In 1943 he retrained as a night fighter pilot and on 1 June 1943 he joined 1./NJG1 where Förster achieved four more night victories.

Often called ‘Father of the Nachtjagd’ Werner Streib, born on 13 June 1911 in Pforzheim, helped develop the operational tactics used by the Nachtjagd during the early and with the likes of Wolfgang Falck made the Luftwaffe’s night-fighter arm an effective fighting force against the RAF bombing offensive. After a spell in banking and finance, Streib had joined the Wehrmacht as an infantryman. A transfer to the Luftwaffe, as an observer in a reconnaissance unit followed and later he trained as a fighter pilot. In 1937 he was assigned to Jagdgeschwader 2 ‘Richthofen’ at Jüterbog-Damm. He then became a Bf 110 Zerstörer pilot in Wolfgang Falck’s ZG1 as the war began. The first of Streib’s 66 Abschüsse and the only one in daylight was a Bristol Blenheim on 10 May 1940. By the end of July I./NJG1 operating from Gütersloh airfield near Münster had a fortunate spell of operations, destroying six bombers in the ‘Helle Nachtjagd’ system. Streib, now Staffelkapitän, 2./NJG1, shot down Whitley V P5007 on 51 Squadron in the early hours on 20 July 25 kilometres northwest of Kiel. Flight Lieutenant Stephen Edward Frederick Curry and three others on his crew were killed and one was taken prisoner. This was followed on 21/22 July by Whitley V N1487 on 78 Squadron flown by Sergeant Victor Clarence Monkhouse ten kilometres north of Münster. All the crew were killed. Streib soon added to his score, claiming two Wellingtons on 30/31 August and three bombers on 30 September/1 October. Kammhuber realised that ‘Helle Nachtjagd’, entirely dependent as it was on weather conditions and radar-guided searchlights was only a short-term solution; it simply could not penetrate thick layers of cloud or industrial haze over the Ruhr and other industrial centres in the Reich. He soon concentrated all his energies in developing an efficient radar-controlled air defence system.