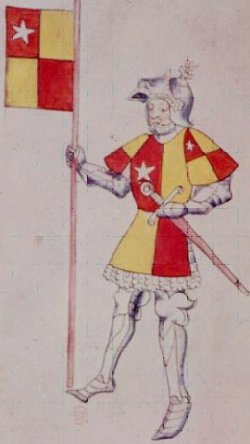 The first of the irreconcilable Lancastrians to break ranks was John de Vere, Earl of Oxford. Not quite twenty when his father and eldest brother had been executed by John Tiptoft, making him head of the family, John had initially been attainted but Edward IV later relented, allowing him to take possession of the earldom in 1464. In 1465 he officiated at Elizabeth Woodville’s coronation, acting as her chamberlain. In spite of this, it is likely that Oxford’s loyalty was always suspected and when trouble began in 1468 he was swiftly arrested and imprisoned within the Tower. Released in early 1469, by the middle of the year he had joined Warwick and Clarence in their efforts to remove Edward, perhaps reminded of the treatment that the king had meted out to his father and brother.

The readeption of Henry VI saw Oxford carrying the Sword of State for Henry’s re-coronation on 13 October 1470. Appointed Constable of England in place of John Tiptoft, Oxford oversaw the trial and execution of the man who had condemned his father and brother. When Edward IV attempted to return it was Oxford’s men, led by his brother Thomas, who prevented the Yorkists from landing in Norfolk. Unlike many staunch Lancastrians, Oxford did not baulk at following Warwick and his flank performed extremely well at Barnet, routing his opposite number but then losing discipline as they celebrated their victory prematurely. When Oxford returned to the battlefield it was to chaos as his men were mistaken for Yorkist forces and attacked. Amid cries of treason, he finally fled the battlefield and rode north.

Remaining in Scotland for only a short period, Oxford sailed for France, by which time Margaret had left and her cause lay broken in a field outside Tewkesbury. Edward IV was fully restored and all of Oxford’s allies, Lancastrian and Neville, were gone. Although remembered as the archetypal Lancastrian, John de Vere’s alliances were less clear during the period surrounding the readeption. John had married Margaret Neville, sister of Richard, Earl of Warwick, and his early involvement in Warwick and Clarence’s plans to unseat Edward in favour of his younger brother suggests that not only was he fixated upon a Lancastrian restoration, but the removal of Edward was his primary concern.

John de Vere had been engaged in piracy in the English Channel since shortly after his arrival in France. He spent almost two years raiding Calais, harassing English shipping and stealing from merchants. The earl appears to have made a good living for himself as a pirate, while simultaneously causing trouble for his enemy Edward IV. In May 1473 he radically altered his tactics, and it is likely that his mother’s rough treatment contributed to his decision to act more directly.

George Neville, Archbishop of York, was to find himself another victim of Edward’s determination to sweep his kingdom clean. The archbishop did not possess the military might to threaten Edward but he was a wealthy and influential man. He had made peace with Edward, handing the capital and King Henry over in 1471, but a little while later Warkworth recorded that he became a focus of Edward’s efforts to ensure his own security. In 1472 George was at Windsor with the king enjoying the hunting, high in the favour of the restored king and bucking the fate of his brothers. Edward told the archbishop that he would honour him by visiting his manor at Moore to sample the hunting there and George, overcome with excitement, hurried home to make preparations. He called for all of his plate and goods that he had placed in hiding after Barnet and Tewkesbury and borrowed heavily to make ready to receive the king. He purchased enough food and drink for his visitors to stay for several days and awaited the king’s arrival on the appointed day in April.

The day before Edward was due to arrive a messenger brought a summons for George to go instead to the king at Windsor immediately. The archbishop obliged and on his arrival found himself arrested for high treason, charged with aiding John de Vere, Earl of Oxford. Sending George across the Channel to Hammes Castle at Calais, an unlikely destination for one genuinely suspected of assisting a pirate rebel at large in the Channel and frequently attacking Calais, Edward despatched several of his men to Moore where they seized all of the archbishop’s neatly gathered treasure. His properties were transferred to Edward, his mitre was broken and the jewels used to make a new crown for Edward. Much of the wealth was passed to the infant Prince Edward, the king’s son and heir. What George Neville had so carefully built over decades was lost in a single day. Although he was released in 1475, George died in poverty and disgrace the following year.

Oxford attempted to land an invasion force on the Essex coast near St Osyth in May 1473 but was repelled. Sailing west along the coast, he eventually arrived at St Michael’s Mount, just off the southern tip of Cornwall. Set atop a tidal island, St Michael’s Mount is the English counterpart of the French Mont Saint-Michel. At low tide there is a beach connecting the fortress perched atop the rocky mount to the mainland, but at high tide it becomes an island with no bridge connecting it. John, along with eighty other men, including two of his brothers, seized the monastery and dug themselves in. Precisely what John hoped to achieve is worth considering, with Lancastrian hope long gone. It is feasible that he was seeking to resurrect a previous alliance with George, Duke of Clarence, whom he believed could still be tempted to topple Edward, having come into possession of his own large Warwick portion.

In September, word reached Edward that Oxford was moving about Cornwall and was receiving a warm welcome. The king sent orders to Sir Henry Bodrugan, chief landowner in the area, to lay siege to St Michael’s Mount and deal with Oxford. Bodrugan duly did as he was instructed, but each day at low tide the Earl of Oxford’s men would come out of St Michael’s Mount under a flag of truce to parlay with Bodrugan before returning to the security of the fortress, which Warkworth claimed could be defended by twenty men against all the world for as long as their provisions lasted. Eventually, on one of his forays out of St Michael’s Mount, Oxford complained that his provisions were running low. At this, Bodrugan had fresh supplies brought to the earl and the mount was restocked.

When Edward heard of Bodrugan’s mismanagement of the siege, he was furious, and sent one of his squires of the body to replace Sir Henry. When Richard Fortescu arrived at the end of December he met angry resistance from Bodrugan but laid siege to the mount. Almost every day the two sides fought, Fortescu losing men and occasional truces being called for a day or two. During the truces Oxford’s men were offered pardons and grants of land if they would abandon the earl so that finally less than a dozen were willing to stay with Oxford. On 15 February 1474 Oxford was forced to surrender St Michael’s Mount. When Fortescu entered he found enough provisions to have lasted many more months. Warkworth believed that Oxford’s willingness to speak to the less friendly Fortescu was his undoing, quoting an old saying that ‘a castle that speaks and a woman that will hear, they will be gotten both’.

Oxford was taken into custody and sent to Hammes Castle at Calais to be imprisoned indefinitely. John de Vere’s part in the story of the Wars of the Roses was far from over but he would be removed from action for a decade now. John de Vere, the pirate Earl of Oxford, scaled the walls of Hammes Castle and jumped from the top into the moat. The water was only shoulder depth and John was swiftly recaptured. It remains unclear whether this was an attempt to escape or to end his own life. John had been a natural Lancastrian but was also Warwick’s brother-in-law and had supported the earl’s attempts to place George upon the throne before the readeption. An implacable enemy to Edward as much as a supporter of any other particular cause, all of his hopes appeared finally lost. It may have been an attempt to gain his freedom but the timing makes a resigned bid to end his life possible too.