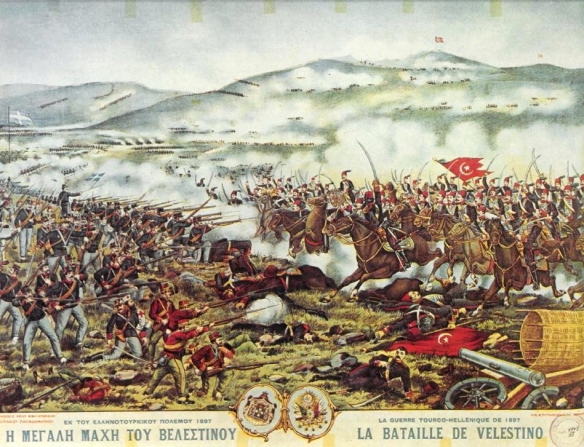 Painting of the Battle of Velestino.

The Ottoman-Greek War of 1897 is instrumental in understanding the successes and shortcomings of the Hamidian military. Actually, the conflict was a limited war in every aspect. The combat actions lasted barely a month. Only 10 Ottoman divisions, reinforced with partial mobilization, took part, and overall casualty figures were low. But it was large enough for an evaluation of the extent of Hamidian reforms.

The Ottoman administration tried its best to stay away from war. However, the over-confident Greek leadership saw the situation for annexing Crete and even expanding on the mainland further north as ripe for exploitation. This was partly due to miscalculation of the Great Powers’ policy and an exaggerated view of the internal problems of the Ottomans, especially regarding the recent Armenian rebellions. Two Greek regular battalions openly landed on Crete and joined with the local rebels on February 15, 1897 (the so-called Vassos Operation). Within two weeks, Greek semi-official gangs, called the Ethnike Hetairia, reinforced with regular officers and soldiers, began to launch guerrilla raids into Ottoman Thessaly. The Ottoman administration reluctantly increased the alert level and reinforced the border guards with regular infantry battalions. On April 9 a reinforced battalion-sized Greek gang with some Italian volunteers attacked Ottoman border towers and defeated a border company in Kranya (Krania). Even though they were repulsed and retreated back to Greece the next day, the incident forced the administration, which was already under intense public pressure, to declare war on Greece on April 17.

The Ottoman-Greek War of 1897 was fought in two separate theaters of operations— Alasonya-Thessaly and Yanya (Janina)-Epirus—but in most of the contemporary works the Yanya theater is neglected due to the fact that combat operations near Yanya remained at divisional level (two Ottoman divisions against a Greek division) and did not affect the outcome of the war. We can divide the combat operations in the main theater (the Alasonya front) into three stages: first, border clashes and the occupation of mountain passes (April 16–22); second, the Mati-Deliler battle and the occupation of Tirnova (Tournavos) and Yenişehir (Larissa) (April 23– May 4); and finally, the battles of Velestin (Valestinos), Çatalca (Pharsalos), and Dōmeke (Domokos) (May 5–17).

For the first time, the Ottoman high command put contingency plans into use. The plan against Greece was prepared by none other than von der Goltz in 1886. It was revised just before the start of the hostilities. The plan was simple—strategic defense by an army corps (two infantry divisions) in the Yanya region and strategic offensive by a field army (seven infantry divisions and one cavalry division) in the Alasonya region. The main idea was to force Greeks to overstretch their initial defensive lines, which were very near to the border. The main body of the Ottoman Alasonya Army would try to fall behind the Greeks before they were able to retreat back to the Yenişehir line. Von der Goltz supposed that the Great Powers would not let the Greeks be beaten and would intervene in the conflict in less than 15 days. So the Greek army had to be crushed in less than two weeks. Obviously, the revised plan demanded the rapid mobilization and transportation of combat units to the front, to fix the main body of the Greek army quickly along the border and enable the encirclement maneuver of cavalry-rich mobile divisions.

The partial-mobilization proceeded smoothly in less than two months. Thousands of reserve soldiers enthusiastically flooded the recruitment centers, and officials encountered difficulties forcing them to send home excess numbers of reserves. Similarly, hundreds of Albanian irregulars saw the conflict as a once-in-a-lifetime opportunity and joined the mobilized divisions as additional assets. Thanks to the availability of good railways, most of the units reached their destination on time (40,000 personnel and 8,000 pack animals were transported in 20 days). However, problems immediately started after debarkation from the troop trains. Transportation of baggage from the last train station to Alasonya, a distance of only 21 kilometers, took an inordinate amount of time and effort due to poor road conditions and lack of transportation assets. The high command was unable to find a satisfactory solution to this problem, and units had to wait days for resupply during the war.

The initial stage of the campaign showed all the shortcomings of an inexperienced but excessively enthusiastic army. Officers and soldiers sometimes ran towards the enemy as if in a race without paying attention to combat tactics and techniques, and the first casualty figures of officers (52 casualties) jumped to abnormally high levels (10 percent for the first stage, 6 percent for the whole campaign) in comparison with the intensity of the combat. Two brigade and several regiment commanders were killed in action during the initial stage (four days long). Typically, regiment and higher-level unit commanders were unable to command and control effectively their battalions. Instead of conducting the encirclement maneuver as planned, most units simply tried to push the Greek defenders back by frontal assaults. Once again, the problematic Ottoman command-control hierarchy and logistics proved clearly deficient after the start of the Greek withdrawal. Confusion, delay, and lack of coordination and communication were the norms of the day. Ottoman forward units reached weakly defended Yenişehir two days after the Greeks withdrew from the town.

Abdülhamid was extremely disillusioned with the performance of his commander in chief, Edhem Pasha, who preferred to spend more time with western journalists than with his subordinates. To make things worse, Edhem Pasha, after showing poor and wavering leadership, suddenly began to ask for reinforcements. The famous commander of the Plevne defense, Osman Pasha, was chosen to replace him, but then at the very last moment the fall of Yenişehir saved Edhem Pasha. The administration also decided to strengthen faltering staff positions by assigning all available general staff officers including military attaché’s and lecturers from the Military Academy.

The second stage proceeded along the same lines as the first. Ottoman units pushed the Greek defenders back without attempting encirclement maneuvers, and the Greeks safely evacuated their defenses retreating to their last defensive line. Although confidence and firmer control under fire replaced the combat inexperience of the Ottoman rank and file, the first battle of Velestin was a disaster. In this encounter, a forced reconnaissance turned into a futile and bloody assault, which proved that the Ottoman officers, especially, were in need of more experience.

The three pitched battles (Velestin, Çatalca, and Dōmeke) in front of the last Greek defensive line turned out to be decisive. The Greek defenders were beaten in detail and lost any chance to safeguard the road to Athens. However, thanks to the limited nature of Ottoman aims and the timely intervention of the Great Powers, Greece was saved from further humiliation. Against the expectations of the Ottoman public, the victory did not result in the return of the Thessaly region, which had been lost in 1882. In fact, the victorious Ottoman troops retreated as if defeated, and Abdülhamid spent several tense months trying to explain why the war had been won by the army but subsequently lost by the diplomats.

Obviously, the Ottoman military was better trained, led, and equipped than the overconfident Greeks. The Hamidian reforms were successful in most respects. For the first time, the Ottoman General Staff functioned like a real general staff rather than as a mere scribal bureau. The artillery corps (thanks to a high percentage of Mektebli officers) lived up to its own high standards and effectively crushed any Greek counterattacks. The newly reformed medical corps performed its medical treatment tasks by opening field hospitals at divisional-level and stationery hospitals in the rear. However, battlefield casualty evacuation, during which casualties spent hours—even entire days—without proper treatment, still lagged behind other armies. The costly investment in railways improved the performance of the ever faulty transportation and logistics system. Even the enthusiasm of the common people overcame the shortages of the Redif system. And thanks to the frequent mobilization of the Anatolian Redifs, most Anatolian Redif battalions performed as well as their regular counterparts, and the Trabzon Redifs (the only mobilized unit from Fourth Army) became famous as the best of all.

Abdülhamid and the Ottoman high command, blinded by the easy victories and by the apparent success of the improvements, paid little attention to the army’s serious problems and shortcomings. First of all, they happily ignored the Ottoman defeat that had been suffered on the Yanya front in front of Loros (Louros). The unexpected Greek assault of April 18 dislocated the Yanya Corps and defeated the 2nd Division. Even though the Yanya Corps gained confidence and recaptured the lost ground in two weeks, the serious shortcomings of the Albanian Redifs and irregulars were exposed. Indeed, the friendly fire of the raw Redifs turned out to be more fatal to their comrades than that of the enemy. The failure to benefit from the lessons of this defeat would play an important role in the collapse of Ottoman regional defense units during the Balkan Wars of 1912–1913.

Second, Abdülhamid still did not comprehend the cost of his paranoia—his banning of divisional and higher-unit maneuvers and all live firing exercises. He was suspicious of all combat training and any large-unit movement, due to his fear of military uprisings or coup d’e´tats against his sultanate. Consequently, the Ottoman generals simply did not have the basic understandings of how to command their units under combat conditions. They were too slow in comprehending the rapidly unfolding modern battles, and they became a liability for their units, which were equally slow to react. The units were unable to perform complex maneuvers, failed to establish and maintain contact, and were notoriously unable to follow up victory. Abdülhamid was so paranoid that he categorically refused the distribution of modern long-range Mauser repeating rifles (fantastically, there were 480,000 7.5 mm and 220,000 9.5 mm rifles on hand) that had been purchased at the cost of increasing the foreign debt. Only one out of ten divisions that took part in the Greek War hurriedly armed themselves with these new rifles; all the others used the veteran Sniders and Martinis during the war.

Third, keeping the same generals for the sake of stability and loyalty frozen in the higher posts effectively limited the opportunity for promotion for an ambitious new generation of officers. The poor leadership performance of these privileged old guards increased the fault line between old and new generations. This especially affected the young general staff officers, who were trained by Germans, and who admired the German model and were already critical of their generals.118 In part due to their counterinsurgency experiences, they became so disillusioned that their military frustration, coupled with political aspirations, turned them into conspirators. They began to plot against the Hamidian regime and established relations with civilian opposition circles.

In conclusion, Abdülhamid achieved remarkable results with the military reforms and reorganization of the Ottoman military after the disastrous defeats at the hands of the Russians. However, his paranoia and lack of confidence in the officer corps that he himself had created limited the overall end results of the reforms. The Ottoman-Greek War not only showed the successes and shortcomings of the Hamidian military, but also acted as a catalyst in which disaffection and disillusionment of the highly trained young officers reached record levels. In a way, Abdülhamid created his own nemesis by providing a better military educational system, but not fulfilling the high expectations of the officers so educated.