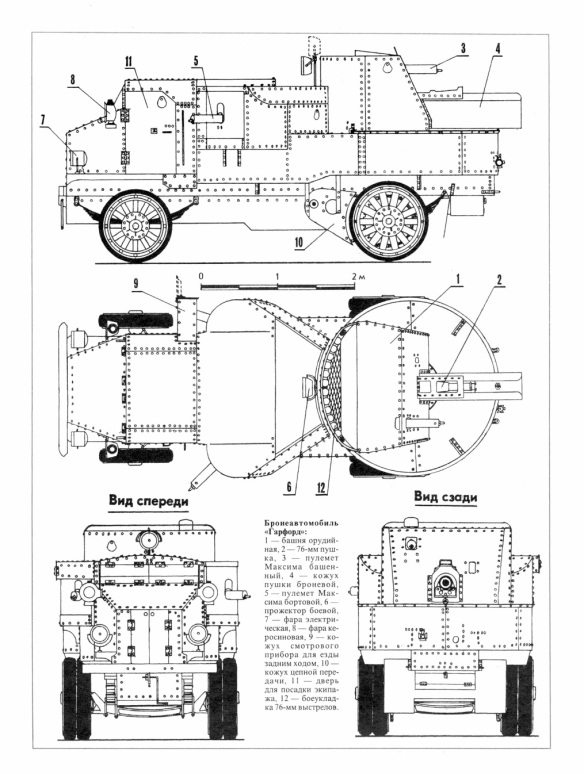 Garford-Putilov Armoured Cars were produced in Russia during the First World War (starting with 1915). They were built on the frames of Garford Motor Truck Co. lorries imported from the United States.
In 1909, the Garford Motor Truck Company was established in Elyria, Ohio, a small town 30 miles outside Cleveland.
By June 1912, the company was awarded a lucrative contract with the United States Post Office. The first order called for 11 trucks, the following for 20 trucks, for a total of 31 trucks. “This is very significant of the practical efficiency of this most advanced commercial car.” The post office had experimented for two years “with practically every truck made.” They tried not only all the leading American trucks, but the foreign trucks, as well. The test resulted in the Garford being awarded first honors. The Garford proved to be the most practical truck under all conditions.
Although considered to be a rugged and reliable machine by its users, the Garford-Putilov was severely underpowered. With a total weight of about 11 tons, and only a 30 hp engine, the vehicles had a top speed of approximately 10–11 mph (16–18 km/h). The design was also overloaded (top-heavy), and therefore had very limited off-road capabilities.

The original versions had separate drivers front and rear for going forward or backward. The front driver could not see anything to the rear, despite the fact that he had a mirror. The initial four Garford Putilov platoons returned to the Putilov factory with their recommendations. The improved version had a window out of the rear “pillbox” where the rear gunner sat in the comfort of something akin to an “armchair” and relayed driving commands via a communications tube to the front driver. This worked marvelously it seems, dispensing with the need for a rear driver or rear driver controls (accelerator, brake).
Besides the countries that emerged from the ruins of the old Russian Empire, Garford-Putilov armoured cars were also deployed by German forces. The Germans captured several of the vehicles, and put them to some use towards the end of World War I, and post-Armistice in the “Freikorps”. The armored cars also saw action in the Russian Civil War.
Armament: 76 mm (3 inch) mountain gun variant and two machine-guns.
Number produced: 48 (total)
Ammo: 60 shells
Armor: 6.5 mm.