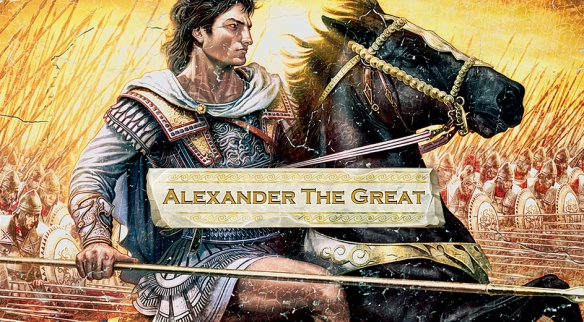 During a twelve-year period in the 330s and 320s BC, a young Macedonian king, Alexander (‘the Great’), had by the tender age of 31 succeeded in becoming master of an empire that stretched from Greece to Pakistan. Many of Alexander’s contemporaries and those who came after him understandably struggled to make sense of his extraordinary success. After all, what Alexander had achieved had never been done before and, it was thought, could never be matched again. Stories swirled around the towns and cities of the ancient Mediterranean and Near East that Alexander was not just descended from celestial lineage, but was actually a god himself.

His meteoric career would be marked out not just by an astounding sequence of military victories, but also by an ability to write his own headlines. Alexander’s ‘heroic’ image was carefully worked on by the coterie of advisers, diarists and historians who accompanied him on campaign. Portrayed as the new Heracles, he had stormed across Asia capturing all in his path. After he stopped his great march eastward in what is now Pakistan, the question for all the peoples of the West was whether they would be the next targets in his seemingly endless thirst for glory and conquest. The terrifying speed with which Alexander had built up his huge Asian empire meant that the idea of his turning his attention westward was a distinct and unsettling possibility. Alexander made the world seem like a small place.

Envoys from all over the lands of the western Mediterranean therefore made the long and arduous journey to the royal court at Babylon to strike up friendly relations with Alexander and to find out what his future intentions were. From Italy there came Bruttians, Lucanians and Etruscans. From the northern climes there were Celts and Scythians. Iberians came from the far West, and Nubians from the depths of Africa. Among this gaggle of supplicants was a Carthaginian, Hamilcar ‘Rodanus’, who had probably learned his Greek while living on the island of Rhodes. Unlike the others, however, Rodanus had not been sent to find out if Alexander wished Carthage well: events at the finale of the siege of Carthage’s mother city of Tyre had emphatically answered that question.

Alexander and his armies had approached Tyre in 332 BC. After being refused entry to the sacred sanctuary of Melqart, Alexander had besieged and then sacked the city, massacring its defenders and enslaving its remaining population. Melqart, the god whose annual cycle of death and rebirth took place in the heat of the sacred fire, would be smothered in the smoking ashes of the city which had for centuries nurtured him. Generations of Tyrian tradition and religious observance would be buried under the martial pomp of self-consciously Greek/ Macedonian ceremonial: military parades, gymnastic competitions, and a torchlight procession of Alexander’s army. The solemn burning of the effigy of Melqart would be set aside for yet another set of anodyne athletic competitions in honour of the Hellenic Heracles. Alexander also seized the sacred boat in which the Carthaginians had first brought their offerings to Melqart many centuries ago, and inscribed it with a Greek dedication.

Diodorus, clearly following Timaeus, digressed from the history of his Sicily to tell how a group of thirty Carthaginian emissaries, who had brought the annual tithe from their city to be offered to Melqart, had found themselves stranded in the besieged Tyre. When the city fell, Alexander had spared the Carthaginians’ lives, sending them home with the ominous warning that Carthage’s turn would come once the conquest of Asia was complete. So Rodanus’ mission at the court in Babylon was to discover quite when rather than if Alexander would launch an attack on Carthage.

According to the Roman historian Justin, Rodanus, considering it unwise to present his credentials in the normal fashion, managed to secure an audience with Alexander by convincing his close associate Parmenion that he was in fact an exile and that he wished to join the Macedonian army. On finding out the Great King’s intentions, Rodanus sent secret missives back to Carthage. However, such was the paranoia that had gripped the panic-stricken city that no one was above suspicion. Rodanus would be rewarded on his return from this potentially perilous mission with execution, because his fellow citizens were convinced that he must have tried to betray Carthage to the Macedonian king.

Alexander’s early demise, in Babylon in June 323, has made it impossible to know if he really did plan to attack Carthage. However, western-Greek and, later, Roman historians certainly wanted their readerships to think so. It suited their anti-Carthaginian agenda to conflate Alexander’s war against the Persian Empire with the Syracusan struggle against Carthage. During his long years of exile in Athens, Timaeus had become deeply influenced by the increasingly hawkish attitudes towards Persia that many Athenian writers had developed against the backdrop of Alexander’s great campaigns in the East. It is highly pertinent that Diodorus, once more following Timaeus, described how, after capturing Tyre, Alexander liberated a statue of the god Apollo which had been sent as an offering to Tyre by the Carthaginians after they had plundered it from the Greek Sicilian city of Gela. Diodorus also took from Timaeus one of the temporal synchronicities of which the latter was so fond, namely that the capture of Tyre had occurred on exactly the same day of the month and hour of the day as when the Carthaginians had stolen the statue from Gela.

Diodorus/Timaeus, like other eastern-Greek commentators, was aware of the association between Melqart and Heracles. He states that it had been Alexander’s initial intention to ‘sacrifice to the Tyrian Heracles’. However, he was certainly not inclined to dwell upon the syncretism that had developed between the Greek hero and the Phoenician god in the minds of many in the Mediterranean world. Instead, as the Carthaginian military became a permanent presence on Sicily, he and other Sicilian historians promoted the association between Carthage and that other supposed great enemy of the Greek world, Persia.

To that end, we know from Diodorus that Timaeus restated the old fabrication that Himera had been the western front of a coordinated attack on the Greeks organized between Carthage and their Persian allies. Then, by pushing back the date of the battle so that it now fell on the same day as Thermopylae, when 300 Spartans had heroically resisted but eventually been overwhelmed by a huge Persian force, Timaeus could portray Himera as the vital turning point in this Mediterranean-wide war between the barbarians and the forces of Hellas. Moreover this also obscured the Syracusan tyrant’s failure to send any help to the mainland Greeks by creating enough delay for a further fabrication: that Gelon had actually sailed to Greece to help the war effort against the Persians, only to be conveniently met by news of the great victory at Salamis.

In Timaeus’ account of the later wars between Carthage and Syracuse, the complex strategic reasons why it was important for Carthage to intervene militarily in Sicily, like those of the Persians in Greece, were reduced to little more than a wish to enslave Hellas, beautifully articulated in one episode by the apparent discovery of 20,000 pairs of manacles in the Carthaginian camp after a Greek victory, or simply a hatred of all Greeks. In another wonderfully evocative but surely manufactured vignette, Timaeus described how Greek mercenaries fighting for Syracusans while fraternizing with their fellow countrymen who were in the employ of the Carthaginians asked them how they could serve a state whose sole aim was to barbarize a Greek city.

Yet what remains of Sicily’s material culture tells a very different story from the tales of ghastly inter-ethnic conflict and total war propagated by hostile Sicilian Greek historians. Decades of bloody conflict had in fact done little to impede the processes of acculturation and accommodation between the Greek and Punic communities on the island. Indeed, the wars between Carthage and Syracuse had directly led to the export far beyond its shores of the religious and cultural syncretism that was long one of the defining characteristics of colonial Sicily. In particular, such ideas had found fertile ground in Carthage, where they had probably been introduced both by members of the Carthaginian elite who had served as officers in the army in Sicily and by the sizeable Sicilian Greek community who were now resident in the city.

One particularly prominent example was the growing prominence in Carthage of the cult of the Greek deities Demeter, a fertility goddess, and her daughter Core, the consort of Hades, king of the underworld. In his history, Diodorus, thought to be following Timaeus, strongly emphasized the Sicilian Greek origins of the cult by insisting that the abduction and rape of Core by Hades actually took place on the island, even though Greek cities in southern Italy had claimed that the heinous event had taken place there. When in 396 BC the cult was officially adopted in Carthage, Diodorus later portrayed this merely as a panic-stricken attempt to appease the goddesses after they had punished the Carthaginians with a visitation of the plague, after the sacking of their temple at Syracuse by the hapless general Hamilcar. At the same time, Diodorus emphasized the indelibly Hellenic nature of the cult by reporting that the Carthaginian authorities had sought out Greeks living in Carthage and assigned them to the service of the goddesses, while those aristocratic Carthaginians who were appointed to be priests of the cult were instructed to follow ‘the ritual used by the Greeks’.