Between the mid-1930s and the end of the Second World War, the British Army deployed around twenty types of tank, many of which were notable only for their lack of suitability to the task in hand. Following the end of the war, Churchill’s so-called ‘iron curtain’ descended across Eastern Europe and the Soviet Union was considered to be the new foe. The lessons of the Second World War were well and truly learned, and over the following decades there have been just five types of main battle tank – Centurion, Chieftain, Challenger 1 and 2, and Conqueror – of which only Conqueror was an unqualified failure.

The situation was far less clear following VE-Day and plenty of Second World War types remained in service in those immediate post-war years, but it must have been obvious to all but the most casual observer of the military scene that most of them had less than a snowball’s chance in hell against the might of the Soviet IS-3 main battle tank. In the eyes of the West, the 122mm gun of the IS-3, combined with caststeel armour with a maximum thickness of 230mm, was a real game-changer. The 17-pounder (76.2mm) gun of the Sherman Firefly or the 77mm gun of the Comet might have stood some chance of penetrating the armour of a German Tiger, but this Soviet leviathan was another matter altogether.

Inevitably the IS-3 caused something of a panic in the West and suddenly bigger was better. It must have seemed as though everything that had gone before was obsolete … the FV301 light tank project, for example, became a casualty of this obsession with size even before prototypes had been constructed, and there is no doubt that the appearance of the IS-3 was responsible for the development of the British Conqueror. However, during the six years that it took to get Conqueror into production, the War Office asked the Department of Tank Design whether or not there was any possibility of quickly producing a heavy gun tank that might be capable of taking on the IS-3. The answer should have been a resounding ‘no’ but several brave attempts were made, often developed along the lines of ‘what would happen if we tried the turret of this tank on the hull of that’. However, none entered series production and all were superseded by the Centurion in its various roles.

In April 1950, with the Conqueror heavy gun tank project mired in delays, the Department of Tank Design (DTD) completed the design for an interim medium gun tank, designated FV221 and named Caernarvon. It was effectively the hull of the FV214 Conqueror combined with the turret and gun of the Centurion, mounted via an adaptor ring. With the Conqueror turrets not ready for production, it was felt that the Caernarvon would give drivers an opportunity to get used to handling such a large vehicle.

The first example was prototyped by Vickers-Armstrong in Mk 1 configuration, armed with the 17-pounder (76.2mm) gun of the Centurion 1. A further twenty vehicles were eventually built in Mk 2 configuration, with the 20-pounder (84mm) gun of the Centurion 3, by the Royal Ordnance Factory Leeds, at a total price of £1.4 million. The first of the production vehicles was completed in April 1952 and the tanks were issued for troop trials a year later, and at least one vehicle had the turret ballasted to simulate the weight of the Conqueror turret.

The subsequent success of the Centurion led to the cancellation of the Caernarvon project after the completion of the troop trials in October 1953. Once the Conqueror turrets became available, seven of the Caernarvon hulls were eventually reworked into the standard Conqueror configuration, but one (07BA70), with the turret removed, was fitted with a Parsons gas-turbine engine in 1954, in place of the Rolls-Royce Meteor. The first armoured fighting vehicle (AFV) to be so equipped, it subsequently wound up being used as a dynamometer test vehicle at Christchurch and survives, sans gas turbine, at the Tank Museum.

In its first incarnation the FV4005 Centurion assault gun consisted of an open-topped Centurion Mk 3 hull on which was mounted a 188mm gun with an auto-loader.

Stage two of the FV4005 project saw the 180mm gun replaced by a 183mm weapon, this time installed in a huge rotating turret. In effect, it was little more than a splinter-proof steel enclosure. This vehicle has survived and is on display at the Tank Museum.

With work starting in 1951, pending the development of a similar self-propelled gun on the Conqueror chassis, FV4005 was an attempt to mount a 180mm gun on the Centurion Mk 3 hull. Stage 1 of the project consisted of an open-topped hull, with the gun having a limited traverse and a concentric recoil system; in this incarnation the gun was fitted with an auto-loader. In Stage 2 the gun was mounted in a light, splinter-proof turret with a conventional recoil system; loading of the ammunition was by hand.

By December 1952 the original 180mm gun had been replaced by a 183mm weapon but the project did not progress beyond the basic feasibility stage and by August 1957 had been abandoned without any series production. One of the prototypes is possibly still retained at the Royal Military College of Science at Shrivenham.

In the early 1950s several proposals were made to use the Centurion chassis as a self-propelled (SP) gun mount.

FV3802 was based on a shortened version of the Centurion Mk 7 and was equipped with the venerable QF 25-pounder (87.6mm) gun. The first of three prototypes appeared in October 1955, but the vehicle was not considered satisfactory and, under pressure from the Royal Artillery, became the FV3805, in which role it was equipped with a huge 5.5in gun. Two prototypes were constructed in this form and were trialled, but the project was eventually cancelled in 1960 in favour of the FV433 Abbott.

Although it does not appear that any of these projects progressed beyond the stages of feasibility discussions and/or mock-ups, there were also plans to use the Centurion chassis to mount the 7.2in howitzer (FV3806), the 120mm anti-tank gun (FV3807), the 20-pounder (84mm) medium gun (FV3808) and the 155mm gun (FV3809). All were quickly discounted.

In 1967 British Aerospace demonstrated a Centurion Mk 5 that had been equipped with the Swingfire wire-guided anti-tank missile system, in the form of twin launchers mounted on the turret sides. Both the Centurion and the Chieftain were also used as a mount for the Marconi Marksman anti-aircraft turret. 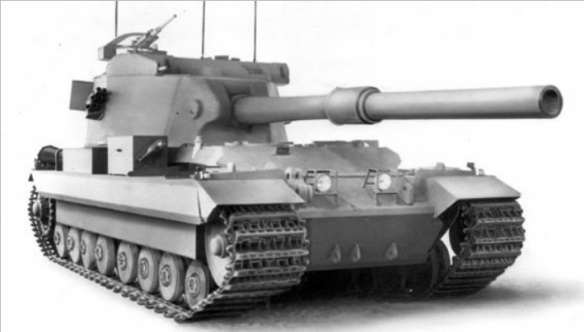 The development of FV215B was carried out by Nuffield Mechanizations & Aero during 1950 with the intention of mounting a huge 180mm anti-tank gun on the Conqueror hull. The photograph shows a wooden model of the proposed vehicle; a full-scale mock-up was almost completed by mid-1955 before the project was abandoned.

The Conqueror prototype number three was intended to demonstrate the flamethrower role and consisted of a Centurion Mk 3 turret with a 20-pounder (84mm) main gun and flame-projector equipment. By the time the flame equipment was ready for trials in July 1948, the decision had been taken to abandon the project and to fit the flame-thrower equipment to the Centurion instead.

FV205 was a proposal for mounting a medium anti-tank gun on the Conqueror hull but it was cancelled in April 1949 with little progress having been made. Some consideration was also given to using the Conqueror hull to mount a high-velocity anti-tank gun in a huge ball mount in the glacis plate (FV206), rather in the style of the German tank killers (Sturmgeschütz) of the Second World War. This project was abandoned in July 1948, as was a similar project designed to provide a Conqueror-based self-propelled gun using a 152mm weapon (FV207).

In May 1952 there was also an abortive proposal to mount a 120mm medium anti-tank gun on the Conqueror hull under the designation FV217. It had been abandoned by the end of the year.

Development work on what was known as ‘heavy gun tank number 2’, or FV215B, was carried out by Nuffield Mechanizations & Aero during 1950 with the intention of mounting a 180mm gun on the hull of the Conqueror. Three trial vehicles were intended to be constructed by Vickers-Armstrong, with the work being undertaken between 1951 and 1955, but two of these were subsequently cancelled before the whole project was abandoned in early 1957 to be replaced by the Malkara wire-guided anti-tank missile, mounted on the armoured 1-ton Humber truck chassis.

The same 180mm gun was also mounted in a Centurion chassis under the project designation FV4005.

Developed during the period 1950–1952, the Conway FV4004 tank destroyer consisted of the hull of the Centurion on which was mounted a larger gun in an attempt to provide sufficient firepower to counter the Soviet IS-3 heavy tank until work on the Conqueror project was complete.

A single experimental vehicle was constructed by the Royal Ordnance Factory Leeds, carrying a huge rolled-steel turret, designed by the Auster Aircraft Company and constructed by Chubbs of Wolverhampton, in which was mounted the American 120mm L1A1 anti-tank gun intended for the Conqueror. The gun had to be mounted high in the turret to prevent the recoil from impacting on the turret ring, and yet the maximum elevation was just 10 degrees. The height of the turret upset the centre of gravity of the vehicle and made transportation very difficult.

Trials continued throughout 1952, but at the end of the year the Conway project was cancelled. The prototype resides at the Tank Museum.