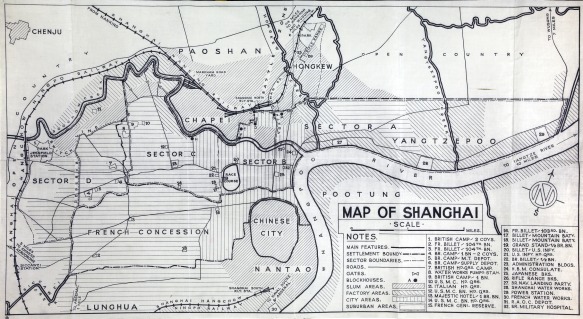 It seemed increasingly likely that Vice Admiral Hasegawa Kiyoshi, the commander of the Japanese Third Fleet, had bitten off more than he could chew when aggressively expanding the operations in the Shanghai area. August 16 was the crucial day. Repeated Chinese attacks put the Japanese defenders under severe pressure and stretched their resources to the limit. Rear Admiral Okawachi Denshichi, who headed the Shanghai marines, had to hastily throw in precious reserves, including irreplaceable tanks, to prevent a Chinese breakthrough. It was a crisis situation, and for the first time the marines had to think the unthinkable. If they did not get help from the outside, they might actually lose the battle.

Three times during the course of August 16, Hasegawa himself sent telegrams to his superiors, each more desperate-sounding than the previous one. After his second telegram, sent at about 7:00 p.m., warning that his troops could probably only hold out for six more days, the Naval Command issued an order to the marine barracks at Sasebo Naval Base in southern Japan to dispatch two units of 500 marines each to Shanghai. After Hasegawa’s third telegram later that night, the navy opted for yet more reinforcements. Two units of the marines, consisting of a total of 1,400 soldiers, waiting in Manchuria for deployment at Qingdao, were ordered to immediately embark for Shanghai.

The Chinese, however, did not feel that things were going their way. The battle continued to be much bloodier than anyone had foreseen. Throwing infantry en masse against fortified positions was perhaps the only feasible tactic available to an army rich in manpower confronting an adversary with an obvious technological edge. Yet, it turned the battle into a contest of flesh against steel. The result was a tremendous loss of life. Chiang Kai-shek was losing patience. After several days of fighting, his troops had still not succeeded in dislodging the Japanese from the streets of Shanghai. The Japanese marines entrenched in the Hongkou and Yang-shupu areas had proved to be a harder nut to crack than he or any of his generals had expected. At a meeting with his divisional commanders, he ordered a massive attack to be launched in the early morning of August 17. The troops were to field more firepower, and be better prepared than they were for the assault three days earlier. Codenamed Operation Iron Fist, it was the most ambitious Chinese offensive in the first crucial week of the Shanghai campaign.

Although the initiative was Chiang’s, in its actual execution the operation was mainly a German undertaking. Colonel Hans Vetter, the advisor assigned to the 88th Division, played a key role in planning the offensive. He wanted to use the Stosstrupp, or shock troop tactics that the Germans had introduced to much effect in the trenches towards the end of the Great War. After intensive artillery bombardment, a small, elite group of determined, well-armed men was to punch through the Japanese lines and fight its way deep into the enemy camp before the defenders had even had a chance to recover from the initial surprise. The procedure was to be followed both by the 88th Division moving in from the west, targeting the area south of Hongkou Park, and by the 87th Division carrying out a parallel operation from the east.

Plans for the attack came at a critical time. Zhang Zhizhong knew that he faced a window of opportunity while he was still enjoying a significant, but probably only temporary, advantage against the Japanese. The window had to be utilized before reinforcements arrived. However, the odds were not good. Urban combat with modern weaponry of unprecedented lethality was a costly affair, especially when the enemy had the upper hand in the sky. Japanese airplanes were a constant menace, carrying out incessant sorties against the Chinese positions at all times of the day. The Chinese Air Force remained a factor, but it was a question how much longer it would hold out against the more experienced Japanese pilots and their better and more maneuverable aircraft.

The growing Japanese presence overhead, maintained by both ship-borne planes and planes based on airstrips on Chongming Island in the Yangtze Delta, greatly complicated any major movements on the ground. “The transport and deployment of Chinese units met significant obstacles due to the busy activity of the Japanese naval aircraft,” German advisors recalled later. Even so, the Chinese Army continued its troop build-up in the Shanghai area. The 98th Infantry Division arrived on August 15 and placed one brigade, half its strength, at the disposal of 87th Infantry Division, keeping the division’s rear area covered during Operation Iron Fist.

As the countdown to the planned final strike continued, morale remained high in the Chinese camp. Despite the lack of progress in the days since the battle had broken out, and despite the heavy casualties, a feeling of relief permeated the ranks. After civil wars that in effect had lasted a quarter century, all Chinese were at long last fighting on the same side. Many officers rushed to write their wills, expecting to die for their country. Few wanted to be killed. Still, they felt that if they had to give their lives, this was a worthy cause. “I was very happy and excited,” said Zhang Fakui, the commander of the right wing in the Pudong area, east of Huangpu, which had been designated as the 8th Army Group. “This was the first and only national war I fought in.”

Iron Fist kicked off as planned at 5:00 a.m. on August 17. With the expenditure of all available firepower, the 87th and 88th Infantry Divisions launched simultaneous assaults against stunned and bewildered Japanese. In line with the Stosstrupp approach of rapid penetration, Zhang Zhizhong introduced a new tactical principle, prompted by the severe losses during the first few days of fighting. Forces under his command were to identify gaps in the Japanese defenses and exploit these, rather than launch massive, costly and most likely futile attacks on heavily fortified positions. Once an enemy stronghold was spotted, the main forces would evade it and leave just enough troops to keep it pinned down.

Chen Yiding, a regimental commander of the 87th Infantry Division, was a pivotal figure in the assault. His soldiers, each equipped with provisions for two days, made good progress during the first hours of Iron Fist, taking advantage of their local knowledge and moving with the slippery dexterity of alley cats. They would enter into a building on one street, knock down the wall inside and exit onto the next street, or they would throw down beams from rooftop to rooftop, sneaking as quietly as possible from one block to the next without being noticed by those on the ground. They proved elusive targets for the Japanese, who would expect them to come from one direction, only to be attacked from another.

Nevertheless, changing the tactical situation of the previous days was not enough. The attackers encountered well-prepared defenses that sometimes could not be circumvented, and losses started piling up from early in the assault. An entire battalion of the 88th Division was wiped out trying to take a single building. Despite the sacrifices, there was no major breakthrough anywhere along the Japanese defense lines. This was partly a result of strong support from Japanese naval artillery in the Huangpu River, and partly a reflection of poor coordination between Chinese infantry and artillery.

Equally detrimental to the Chinese cause was their careful avoidance, during the first days of combat in Shanghai, of fighting inside the International Settlement, or even in the predominantly Japanese part of the settlement, in order not to anger the outside world and swing international opinion against them. This approach frustrated their German advisors. “It was obvious that the attacking troops had been told to only take on enemies standing on Chinese territory, not the ones inside the international areas,” the Germans wrote with an almost audible sigh of regret in their after-action report.

Their frustration was shared by several Chinese officers at the frontline. “We are much handicapped by the demarcation of the foreign areas,” the adjutant to a divisional commander told a western reporter. “We could have wiped out the enemy if it had not been for orders from the Central Government and our commander to avoid causing damage to foreign lives and to give them adequate protection.” The existence of the large foreign community mainly played into Japanese hands. Many of Chiang Kai-shek’s officers believed that if the Chinese had been able to move through the French Concession and the International Settlement and attack the Japanese from the rear, they could have won easily. “Without the protection provided by the foreign concessions they would have been wiped out,” said Zhang Fakui.

At the same time, the Chinese commanders had only hazy ideas about conditions at the frontline and were sometimes misled by exaggerated claims made by officers in the field. At 9:00 a.m. on August 17, the commander of the 87th Infantry Division reported to Zhang Zhizhong that the Japanese Navy Club, a key position, was in his possession. However, when Zhang sent his own people to the spot to investigate, it turned out a four-story building right next door was still occupied by the Japanese who were determined to defend the building to the last man. The divisional commander’s self-assured claim was further undermined later that afternoon, when Japanese troops carried out two counterattacks from a nearby naval drill ground. It was, therefore, understandable that not all officers trusted reports that their own units sent back to them. One regiment of the 87th Division was under specific orders to document any advance it made. Every time it had taken a key objective along its predetermined route of advance, it was to pull down a street sign and send it back as evidence that it indeed was in control of the position.

At the end of the day, the Japanese won. Defense had proved stronger, as it had for four long years on the Western Front during the Great War. The challenge the Japanese faced was tough, but at least it was straightforward and uncomplicated. They had to hold on to Hongkou and Yang-shupu and wait for reinforcements to arrive. They proved themselves adept at this job. In many cases, Chinese soldiers found themselves fighting for the same objectives they had been targeting when the battle for Shanghai began several days earlier. Pan Shihua, a soldier in the 88th Infantry Division, took part in a harsh seesaw struggle around the Eight Character Bridge, where lax preparation caused casualties to run unnecessarily high. “Because we hadn’t done reconnaissance well enough beforehand, we found ourselves surrounded by Japanese armor on all sides,” he said. The Chinese forces were getting bogged down. Zhang Zhizhong’s window of opportunity was closing fast.