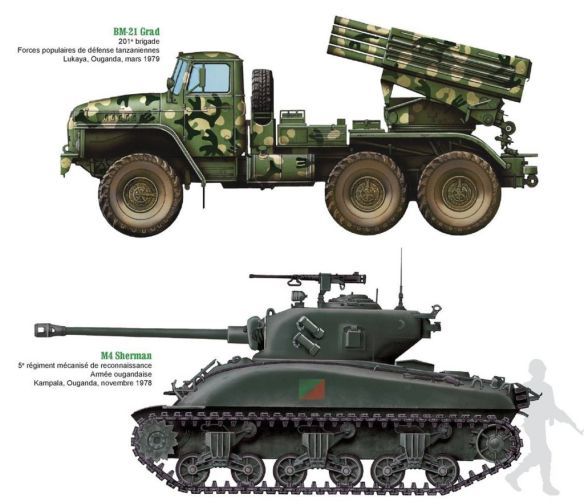 The Uganda–Tanzania war (usually referred to in Uganda as the Liberation War) was fought between Uganda and Tanzania in 1978–1979, and led to the overthrow of Idi Amin’s regime. Idi Amin’s forces included thousands of troops sent by Libya, and some Palestinian support.

Relations between Tanzania and Uganda had been strained for several years before the war started. After Amin seized power in a military coup in 1971, the Tanzanian leader Julius Nyerere offered sanctuary to Uganda’s ousted president, Milton Obote. Obote was joined by 20,000 refugees fleeing Amin’s attempts to wipe out opposition. A year later, a group of exiles based in Tanzania attempted, unsuccessfully, to invade Uganda and remove Amin. Amin blamed Nyerere for backing and arming his enemies. The relationship between Uganda and Tanzania remained strained for many years.

In early October 1978, dissident troops ambushed Amin at the presidential lodge in Kampala, but he escaped with his family in a helicopter. This was during a period when the number of Amin’s close associates had shrunk significantly, and he faced increasing dissent from within Uganda. When General Mustafa Adrisi, Amin’s Vice President, was injured in a suspicious car accident, troops loyal to Adrisi (and other soldiers who were disgruntled for other reasons) mutinied. Amin sent troops against the mutineers (which included members of the elite Simba Battalion), some of whom had fled across the Tanzanian border. The rebellion spilled over into Tanzania, where Tanzania-based anti-Amin exiles joined the fighting against Amin’s troops.

Uganda declared a state of war against Tanzania, and sent troops to invade and annex part of the Kagera region of Tanzania, which Amin claimed belonged to Uganda.

Nyerere mobilized the Tanzania People’s Defence Force and counterattacked. In a few weeks, the Tanzanian army was expanded from less than 40,000 troops to over 100,000 including members of the police, prison services, national service, and the militia. The Tanzanians were joined by several anti-Amin groups consisting of Ugandan exiles, who at a conference in Moshi (Moshi Conference) had united as the Uganda National Liberation Army (UNLA). These included Kikosi Maalum commanded by Tito Okello and David Oyite Ojok, FRONASA commanded by Yoweri Museveni, and Save Uganda Movement commanded by Akena p’Ojok, William Omaria, and Ateker Ejalu.

The Tanzanian Army acquired a Soviet BM Katyusha rocket launcher (known in Uganda as saba saba), with which they started to fire on targets in Uganda. The Ugandan Army retreated steadily. Libya’s Muammar Gaddafi sent 2,500 troops to aid Amin, equipped with T-54 and T-55 tanks, BTR APCs, BM-21 Grad MRLs, artillery, MiG-21s, and a Tu-22 bomber. However the Libyans soon found themselves on the front line, while Ugandan Army units were using supply trucks to carry their newly plundered wealth in the opposite direction.

The Libyan troops were a mix of regular Libyan Army units, People’s Militia, and sub-Saharan Africans of the Islamic Legion, a further force created by Libya for this type of expeditionary mission. The Tanzanians, joined by UNLA dissidents, moved north for Kampala but halted at the vast deep-water swamp north of Lukaya. The Tanzanians decided to send the 201st Brigade directly across the causeway over the swamp while the better-quality 208th Brigade skirted the western edge of the swamp as an alternative in case the causeway was blocked or destroyed. A planned attack by a brigade-sized Libyan force with fifteen T-55s, a dozen APCs, and BM-21 MRLs, intended to reach Masaka, instead collided with the Tanzanian force at Lukaya on 10 March and sent the 201st Brigade reeling backwards in disarray. However, a Tanzanian counter-attack on the night of 11–12 March from two directions, involving a reorganised 201st Brigade attacking from the south and the 208th Brigade from the north-west, was successful, with many Libyan units, including the militia, breaking and retreating at a run. Libyan casualties were reported at 200 plus another 200 allied Ugandans.

Tanzanian and UNLA forces met little resistance after the Battle of Lukaya and carried on west toward Kampala, first taking the Entebbe airfield after some fighting, and then taking Kampala itself on 10 April 1979. Few Ugandan or Libyan units gave much resistance; the greatest problem for the Tanzanian troops was their own lack of maps of the city. Amin fled, first to Libya and later to Saudi Arabia. The Libyan forces retreated to Jinja and then were repatriated finally through Kenya and Ethiopia. The Tanzanian army remained in Uganda to maintain peace while the UNLF (the political wing of the UNLA) organized elections to return the country to civilian rule.