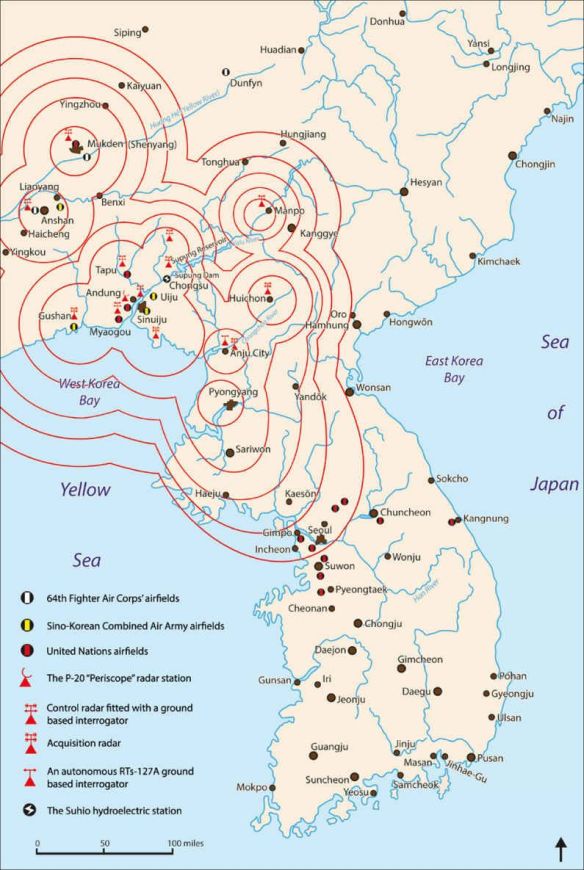 Repeated requests by the Commander of the 5th Air Army United States Far East Air Force – General Earl E. Partridge – to allow his pilots to pursue enemy aircraft over Manchuria and to destroy them on the ground met with so many rejections from Washington. However, the fierce resistance from Chinese units that had joined the war at the end of October pushed General MacArthur towards the idea of a bombing raid behind enemy lines close to the Chinese border. General Stratemeyer allowed the fighter-bombers to attack targets across the whole of North Korea, right up to the Yalu River. At the same time, General O’Donnell set new challenges for his Superfortresses … this time, however, the illusion of waging a ‘humanitarian war’ – with highly accurate bombing of military targets without wishing to inflict losses on the civilian population – was abandoned. The B-29s’ designated targets were the cities of North Korea – and O’Donnell ordered his crews to bomb them from end to end using incendiary bombs. On 1 November, B-29 bombers struck the cities of Nanam, Chongjin and Kanggje; then came raids on Sonchon, Bukchang, Maeng-san and Changjin. Worst hit was Hoeryong, as O’Donnell’s bombers had dropped 32,000 ‘incendiaries’ on the city. On 5 November, MacArthur gave the order to start a two-week-long operation to inflict maximum damage on the enemy. By issuing this order, he had ratified the directives issued by Stratemeyer and O’Donnell – and despite the bans put in place by Washington, he in fact had unleashed Bomber Command; the 5th Air Army; the 77th Operational Fleet Detachment and US Marine aviation for the unprecedented and unrestricted bombing of the entire territory of North Korea. The portfolio of targets included those that could be used by the enemy in any way; the kilometre-long bridge over the Yalu River linking Andung and Sinuiju, along which the mass deployment of troops which had crossed from China into Korea, were designated a priority target.

In the middle of the day on 5 November (in accordance with the plan for two weeks of bombing) Superfortresses from the 19th Bomb Wing dropped 170 tonnes of bombs on Kanggje – destroying more than half of the city’s buildings. Word of this raid reached Washington that evening, along with a copy of MacArthur’s order. The news of the raid caused a storm in government – and the decision to bomb the bridges over the Yalu River was a cause of particular concern. Close to midnight – and on the personal orders of President Truman – the Committee of the Joint Chiefs of Staff ordered MacArthur to abandon any plans to use UN aircraft any closer than five miles from the Sino–Korean border. MacArthur himself immediately responded by telegram – stating that he was unable to carry out this order, since all the supplies to the Chinese forces at the front come across these bridges. This unforeseen concern, which was sent by telegram, persuaded the Committee of the Joint Chiefs of Staff to approve MacArthur’s order, but that the raids on the bridges be carried out without violating Chinese airspace. Apart from that, the Joint Chiefs of Staff categorically ruled out any combat activity on the eastern side of the Korean Peninsula (close to the border with the USSR), no matter how enticing the targets in that region might be.

The first sortie under this newly-approved plan was set for 7 November – and the target was Sinuiju; a total of 70 Superfortresses were due to take part in the raid. The crews took their positions in the bombers at dawn, but the operation was cancelled at the last minute due to adverse weather conditions; the sortie took place the following day. That morning, Mustangs from the 8th Group and Shooting Stars from the 18th and 49th Groups rained down rockets on anti-aircraft artillery positions on the southern bank of the Yalu River close to Sinuiju – clearing the way for the bombers. Above them (at an altitude of 6,000 m) two flights of F-80s provided fighter cover for the raid. Half an hour later, 70 Superfortresses appeared one kilometre above Sinuiju and dropped 580 tonnes of incendiary bombs on the city. After the main bombing force had left, a further nine Superfortresses flew over the city and bombed the bridge over the Yalu River. This time, the crews of the 19th Bomb Wing, who were ‘bridge specialists’, missed the target … the 454 kg high-explosive bombs damaged the approaches to the bridge, but the structure itself was undamaged.

On 9 November, the task was transferred to naval aviation. At 1000 Skyraiders and Corsairs, with ‘Panthers’ providing cover, descended on the bridge – and 20 minutes later, an RB-29 appeared overhead to monitor the results of the raid …

The eighth day of combat activity for the 28th and 151st Fighter Air Divisions in Korea – 8 November – began at 0941 with a sortie by two flights of MiG-15s from the 72nd Guards Fighter Air Regiment. Over the course of the next hour, dogfights took place in the air over Sinuiju between MiGs from the 72nd and 139th Guards Regiments and Mustangs and Shooting Stars that were attacking anti-aircraft artillery positions. During these dogfights, one MiG sustained a bullet hole to an external drop tank, and two pilots recorded one Mustang kill each. This series of morning dogfights, however, were but a precursor to the main event of the day: the mass raid by B-29s on Sinuiju and the bridge over the Yalu River.

There was a delay in scrambling the MiGs to intercept the bombers … as V.G. Monakhov, a veteran of the 28th and 72nd Guards Fighter Air Regiments recalled, this delay was not a significant one (a little more than five minutes), but it was enough to decide their fate. The MiGs were still some 50 km from the Yalu River when the pilots noticed aerial bombs exploding ahead of them. On finally reaching Sinuiju, the fighters just caught the last of the departing bombers by surprise, and there was no longer any sense in pursuing them.

It is hard to define categorically why the intercept failed. It is possible that our fighter commanders had not anticipated a mass raid on targets located in such close proximity to the Chinese border; it is likely that a scenario such as this had been considered, and they could not fail to examine this possibility, being so close to the front line! When this perceived threat became a reality, however, they were not ready. An extra five minutes were wasted on evaluating the situation, making a decision and seeking approval from those further up the chain. Another reason could be that there were not enough aircraft on red alert to counter such a massive bomber raid. An examination of the statistics for combat sorties flown by 28th and 151st Division aircraft in the first few days of the war reveals that they rarely launched more than eight MiGs at a time. Two flights is nowhere near the number required to counter 70 Superfortresses, with their 840 large-calibre machine guns. It would have taken the same amount of time (five minutes) to bring the required number of fighters up to the first state of readiness, and for them to take off. Either way, for one reason or another, the fighters were delayed.

The following morning, American naval aircraft appeared over the bridge and MiGs from the 28th, 72nd and 139th Guards Fighter Air Regiments were scrambled to intercept them. At 1000 – when the battle had only just begun – the radar at the Antung Auxiliary Command Post (ACP) detected a large group of up to 40 Superfortresses; their heading would have brought them straight to the Antung Bridge and Sinuiju. Eight minutes after the first indication of the bombers, six MiG-15s were scrambled from the 72nd Guards Fighter Air Regiment, led by Major Bordun. According to calculations, our fighters were to approach Sinuiju, along with the ‘Fortresses’. However, the bombers were soon turning back. One possible reason for this was that they had been informed that MiGs were active in the area, although it cannot be ruled out that Sinuiju was not their intended target. Bordun’s group continued to fly south – and at the same time, the radar station at Antung detected a new target. At 1020 an RB-29 strategic reconnaissance aircraft – flanked by two flights of F-80s – appeared over Sinuiju to monitor the results of the raid by naval forces.

Meanwhile, fighters from the 72nd Guards Regiment were approaching Sinuiju from the south-west; they were given a heading to intercept the reconnaissance aircraft from the radar station. Apart from that, anti-aircraft artillery made it easier to locate this aircraft by following the explosions of the anti-aircraft shells. At 1025 Major Bordun’s wingman, Senior Lieutenant Dymchenko, spotted a Superfortress heading south at an altitude of 4,000 m and escorted by eight Shooting Stars …

The following is from An Overview and Analysis of 151st Fighter Air Division Air Battles [Here – and further on – the style of the document has been retained. The document uses Peking Time, but we have provided the equivalent in Central Korean Time in square brackets]:

At 0929 [1029] Major Bordun gave the order: “I’m going to attack the enemy aircraft with two fighters, using the rest for cover!” and began to close on the B-29s in a climb. As he closed on the enemy to a distance of 1,000 m to 600 m the bomber’s gunners started to rake him with machine gun fire from their lower gun turrets.

It was Snr Lieutenant Dymchenko who made the second attack, from a distance of 600 m and an aspect angle of 0/4 and noticed flames coming from the aircraft’s port side, it then departed back to Korean territory descending sharply and banking to port.

The B-29 did not return fire when Snr Lieutenant Dymchenko gave it a second burst.

At the end of the attack Snr Lieutenant Dymchenko was given an order: “Enemy fighters attacking from above and to your left”. As they broke off the attack with a half wing over to starboard, the enemy fighters attempted to attack the leader of the group but they were late in their attack, since they had broken away from the bomber following anti-aircraft fire. The B-29 had entered dense cloud cover at an altitude of 4,000 m just before the attack and the escorting enemy fighters became separated by anti-aircraft fire and were behind and to the left of the bomber out of the cloud.

Seizing this opportunity Major Bordun attacked the B-29 successfully and the enemy fighters were not able to head off Major Bordun’s group in time.

After this attack Major Bordun’s group broke away and returned to base. The enemy did not attempt to pursue them or force them into a dogfight.

On the basis of the outcome of this battle, Major Bordun and Senior Lieutenant Dymchenko were credited with one joint kill. Western sources confirm that the RB-29 they attacked was destroyed during an emergency landing at Gimpo (just outside Seoul) and that five crewmembers were killed, while the gunner – Staff-Sergeant Harry J. Lavene – was credited with having shot down a MiG.