Triumph of Shapur I over Valerian, rock-cut relief, Bishapur, Iran. 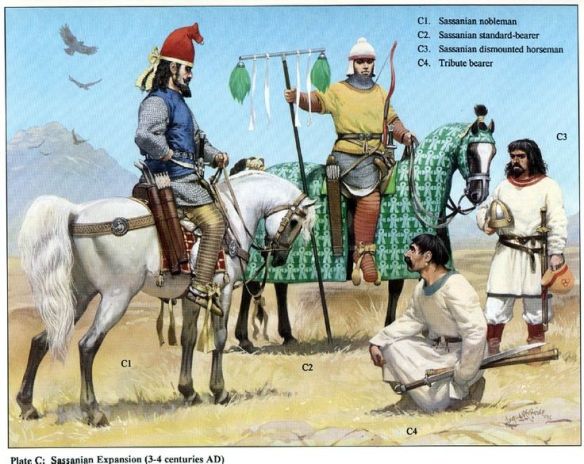 By the end of 238 or the beginning of 239, the Persians were ready for another assault on the Roman east. They attacked and took several cities in Syria and Roman Mesopotamia. Hatra fell to them, probably in 240. It was another two years before the Roman government took action against the Persians. The young Gordian III and his Praetorian Prefect Timesitheus mobilised in 242, preparing for a campaign in 243. It was a fortuitous time to start the campaign, since Ardashir died in 241, and on his accession his son Shapur was preoccupied with rebellion among the conquered peoples on the periphery of his Empire. He subdued the rebellions and was crowned king of kings in 242, so when the Romans arrived he was ready to face them. For this period the evidence is not limited to the works of the Roman or Greek historians, presenting the Roman point of view, since Shapur recorded his exploits in the so-called Res Gestae Divi Saporis, the famous inscription from Naqs-i Rustem, carved on the rock face in three languages. Parthian, Persian and Greek. Shapur first establishes exactly who he is, the Mazda-worshipping king of kings, son of Ardashir. Then he carefully docu- ments all the territories that he commands. The next entry is a laconic account of the war with Gordian III, who marched against him with an army drawn from the whole Roman Empire and from the Goths and Germans. There was a great battle at Meshike, in which Gordian was killed, and the Romans made Philip their Emperor. Then the new Roman Emperor made peace, paying 500,000 denarii to buy it. It is assumed that there was a treaty between the two powers. Meshike was renamed Peros-Sabour in honour of Shapur’s victory; the Romans called the place Pirisabora (modern al-Anbar). Shapur depicted his defeat of the two Emperors on several rock carvings, notably at Bishapur, where Gordian III is shown lying beneath Shapur’s horse, and Philip kneels before the king of kings.

The Romans left, proclaiming that peace had been made with the Persians (pax fundata cum Persis). Philip made novel arrangements for the government of the east, installing his brother Priscus, who was already Praetorian Prefect, as rector orientis. Shapur was the most vigorous and the most hostile king of kings, representing much more of a threat to Rome than the Parthian kings for many generations, so Philip tried to counter the threat by leaving behind him a reliable deputy who could watch for further developments in the east. Shapur did not remain quiescent for very long after the treaty of 244. In the early 250s, perhaps even earlier, he was involved in a struggle over the control of Armenia, whose king, Chosroes, may have raised a revolt against him. It is possible that the Romans backed the revolt or encouraged it because it was in their interests to foster internal warfare on the borders of Shapur’s territory. Shapur resorted to subterfuge, disposing of the king by having him murdered and then establishing control over the kingdom. He departed from the usual tradition; instead of installing a pro-Persian king of his own choice he subjected the country to direct military rule, creating a territorial province as the Romans had tried to do from time to time. In the meantime, the son of Chosroes, Tiridates, had fled the country, his most likely destination being the Roman Empire. The sources do not fully corroborate this supposition, merely attesting that he went to Greece, but it is more than likely that he had Roman support when he returned to Armenia, allegedly ousting Shapur’s troops with great slaughter.

According to Shapur’s account ‘the Roman Caesar [who is not named] lied and did wrong over Armenia’, which perhaps refers to Roman support for the revolt of Chosroes or for his son Tiridates. There may have been an agreement in the peace terms with Philip that the Romans would not inter- vene in Armenian affairs. The context is uncertain, and the Emperor to whom Shapur refers may be Philip, or possibly Trebonianus Gallus. Next, Shapur says that he made war on the Romans, inflicting a severe defeat on a large Roman army of 60,000 men at Barbalissos. This may mean that in the course of invading Syria, the Persians wiped out a provincial garrison, perhaps exaggerating the numbers; the Roman sources are either unaware of this disaster, or more likely contemporary annalists decided to gloss over it. There is no Roman tradition of a full-scale war in the east until the cam- paigns mounted by Valerian, and even then the dates of these events are only approximate. The main focus of Roman activity in the second half of the third century was on the Danube and in the provinces threatened by the Gothic raids across the river. The Emperor Decius was killed in 251 whilst fighting against the Goths; his successor Trebonianus Gallus, formerly gov- ernor of Moesia, fought desultorily but then made peace and returned to Rome with Decius’ son. The apparent lack of effort against the Goths incensed the Roman army, so they readily proclaimed Marcus Aemilius Aemilianus Emperor when he took over as governor of Moesia and began to fight the Goths with some success. Aemilianus left the frontier and marched towards Italy to fight it out with Trebonianus Gallus, and though the potential civil war was averted by the intervention of Valerian and the death of Aemilianus, the rapid turnover of Roman Emperors did not cease. Shortly afterwards, Gallus died; the army raised Valerian and his son Gallienus as joint Emperors. There was a recurring tradition of striking the enemy when there was trouble elsewhere; while the Romans fought amongst themselves Shapur seized his chance. It may have been in 252, as Gallus made peace with the Goths and returned to Rome, when Shapur attacked Armenia, though some authorities date this to the following year. As the rebellion of Aemilianus was played out, Shapur turned his attention to Antioch and may have captured the city in 253 when the Roman coinage temporarily ceased. The mint reopened in 254, which is taken as an indication that the Emperor Valerian had re-established Roman control of the city.

The capture of Valerian and the supremacy of Odenathus

Though there were no Imperial campaigns during the late 250s, the war between the Romans and Persians had never formally ceased, and hostilities broke out again towards the end of the decade. Without giving a precise date, Shapur records that he embarked on a third campaign against the Romans in which he besieged Edessa and Carrhae, took the Roman Emperor Valerian prisoner, and acquired several cities of the Romans together with their surrounding territories. It was an unparalleled success for Shapur, who made much of his achievement via the sculptured reliefs at Naqs-i Rustem, Bishapur, and elsewhere. It was also an unparalleled disaster for the Romans, worse even than the defeat of Crassus in 53 BC . After the death of Crassus and the loss of his army, there was no immediate offensive, but the eastern provinces were not occupied and annexed by the Parthians. In 260 Shapur had actually captured Roman cities, but there was no possibility of a Roman campaign against him to recover them. Valerian’s son and successor Gal- lienus did not attempt to mount one, not even to rescue his father. Though Shapur claimed that he took several Roman cities, he may have exaggerated the number of places that fell to him; in the end his territorial gains do not seem to have been tremendous. He boasted of having burned and destroyed vast stretches of Roman territory and had probably caused great damage to property and crops. Retrieval of the east devolved upon Odenathus of Palmyra. Already vir consularis by 258, Odenathus acquired more power and independence after the capture of Valerian. It was rumoured that he had tried to forge an alliance with Shapur, but if this is true it came to nothing. Palmyra did not turn away from Rome, though it is not clear whether Odenathus received any official appointment as governor of an eastern province or region with a command over Roman troops, or whether he stepped into the breach voluntarily, acting independently with an army of native levies. He did Rome good service in whatever capacity he operated. He fought the Persians as they retreated across the Euphrates, dealt with the usurper Quietus by besieging him in Emesa and finally killing him, and he also repulsed a Gothic attack. He is credited with a campaign into Persian terri- tory, where he reached Ctesiphon, in 262 or 263. He was the most energetic figure in the Roman east, and the most successful. Gallienus rewarded him, probably with specific powers, but unfortunately it is not known precisely what these powers might have been. He was dux totius orientis or corrector totius orientis, commander of the whole east, but the interpretation of exactly what the words mean is a tortuous question. The titles applied to Odenathus are derived from those assumed by his successor Vaballathus and perhaps are projected backwards in an effort to provide tangible roots for Palmyrene power. But the lack of contemporary sources for Odenathus’ titles does not alter his situation. It is fairly certain that he was the man of the moment in the east after the capture of Valerian, and that Gallienus recognised this fact; but, hard pressed as Gallienus was, instead of trying to re-establish his own authority over the eastern provinces he was content to allow the Palmyrenes under Odenathus control of the area, at least for the time being. By 262 the eastern provinces seem to have reverted to business as usual; inscriptions reveal that building work was going on and religious dedications were being made at some Roman sites, and Antioch minted coins for Gallienus. Odenathus never seems to have overstepped his brief, whatever it was, by attempting to take over more territory, setting himself up as a completely independent king in opposition to Rome.