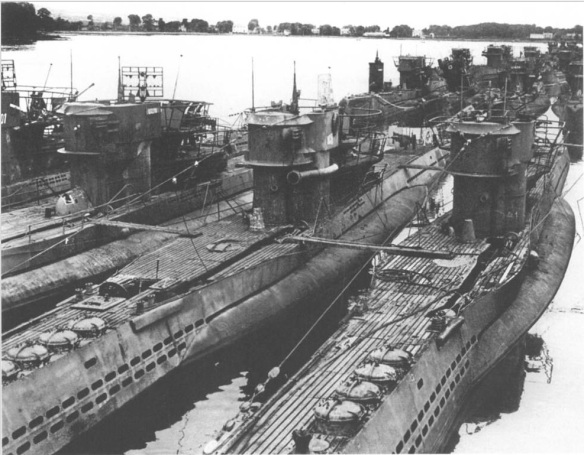 Type VIIC/41 U-boats with their 88mm deck guns removed. Towards the end of the war the U-boats had few opportunities to use their guns and instead attacked with their primary weapon, torpedoes, staying concealed themselves. From the right, U 1109, U 1058, U 278 and U 901.

Late Type VIIC and VIIC/41 U-boats were fitted with the GHG passive sonar array. It was fitted under the bow, below the torpedo tubes, as show here on U 1105.

Some problems were discovered with the Type VIIs in the early years of their service. Firstly, the beds of the diesel engines were found to be too weak, which limited their ability to operate for long periods at sea and was also a drawback in combat where the boat might have to endure sustained depth-charge attacks. The beds had to be replaced, meaning that the boats had to be withdrawn from operations for prolonged periods in dockyard hands. Secondly, the valves that sealed the diesel exhaust when the boat dived were found to be faulty, causing potentially disastrous leaks during deep dives. It was suspected that a number of U-boats lost in the early stages of the War had sunk for this reason, including even the famous U 47, commanded by the ace Korvkpt. Günther Prien, though of course he and his crew took the truth of their fate to their graves.

Despite these problems, the Type VII was in all an outstanding design, meeting and in many cases exceeding the requirements of the U-boat command, thanks to careful planning, well-specified requirement, the basing of the design on a tried and tested predecessor from the previous war, and not least the skills of its designers Schürer and Bröking. Being able to build a prototype for Finland and conduct extensive sea trials with naval officers aboard was also very helpful, allowing problems to be identified and improvements made before series production began. It was also relatively cheap at four million Reichsmarks, allowing for mass production, although this was not without other problems.

In conclusion it can be said that the Type VII was a specific compromise between tactical requirements, financial constraints and the terms of the 1935 London Naval Treaty. However, the rate of production of these boats – at least initially – was too slow, and by the time it reached an acceptable level the time of the Type VII had definitely passed, and the future belonged to the new generation of Type XXI and Type XXII U-boats. They may have been obsolete towards the end of the War, but they were still dangerous, and the losses they had inflicted during the Battle of the Atlantic were truly terrifying.

So it was a boat with good performance, relatively cheap and durable; a boat superior in terms of both speed and range to its most modem British counterparts, though with lesser firepower in one torpedo salvo. A Type VII could fire five torpedoes to the ‘T’ class’ ten (six from bow tubes, two from deck tubes and two from waist tubes). The German boat was also smaller than, for instance, American and Japanese subs. The Kriegsmarine crews inhabited more cramped and less luxurious accommodation than their Yankee colleagues, though this did not bother them as the living conditions of U-boat men were entirely up to German fleet standards. The Type VII was, however, undoubtedly superior to all other submarines of its time in terms of diving speed, manoeuvrability and resistance to depth charges. Their solid construction allowed them to dive much deeper than their ‘competitors’ could. Superbly commanded, reliable and effective, manned by elite crews, they became a highly dangerous instrument of war, something that – in Churchill’s own words – terrified him the most.

The ‘Sevens’ were excellent war machines, designed as a perfect weapon. German U-boats also had – as is agreed among the subject’s researchers – the worlds’ finest optical equipment. The Zeiss-made 7 × 50 binoculars used by the U-bootwaffe were the best in the world. They were watertight, durable instruments of high lens clarity, and provided the lookouts with excellent observation. The very light German attack periscopes were also outstanding when compared to those used by other navies. The prisms and lenses used in their construction, also manufactured by Zeiss, were of exceptional clarity, were not prone to flattening, and stayed tuned allowing for very accurate observation and aiming. Zeiss periscopes had a single eyepiece and a folding saddle used during the attack by the skipper, who could freely rotate and elevate the scope in all planes using control pedals and levers. The other achievement of German optics was the Überwesserzieloptik (UZO) – a combined optical sight, binoculars and rangefinder combined in one device, set on a special mounting on the bridge. The data acquired by the UZO were automatically passed to the Vorhaltrechner torpedo fire-control computer. The UZO was undoubtedly the finest such instrument used aboard any country’s submarines during the War.

The sonar systems used by German submarines, including the Type VIIs, were divided into three groups. The first were passive devices, commonly known as hydrophones, which were similar to those used in all other navies at that time. They emitted no signals, only picking up external sounds, for example from the propellers of other vessels. From the very beginning the Type VIIs carried GHG (Gruppenhorchgerät) hydrophones, used to detect targets and provide an approximate bearing and estimation of range. Of course, range estimation was largely guesswork, based on the skill and experience of the operator in judging the distance to the target from the volume of sound picked up. To help with this, the Kriegsmarine built up a library of recorded underwater sounds, recorded at different ranges and bearings, which included natural noises, providing a basic ‘textbook’ for hydrophone operators. Target bearing could be determined with reasonable accuracy, although not sufficiently to provide a torpedo firing solution. The GHG consisted of electronic amplifiers and twenty-two microphones installed in the bows (eleven on either side of the hull). Each of them had its axis at a precise angled, which allowed the bearing to be determined by identifying the sensor which had picked up the signal. In order to increase accuracy the designers constantly experimented with increased numbers of microphones and eventually came up with the GHG Balkon system with forty-eight sensors installed in two rows. The GHG was able to detect a single ship at 20km (11nm), and a convoy at approximately 100km (55nm) – not a bad performance for the time. The microphones of the system were made of very high quality Seignette-Salz-Kristall crystals, which actually came as a surprise to the Allies – the Americans kept using these until the 1950s. The performance figures given above of course apply to good hydroacoustic conditions and could significantly deteriorate in stormy seas or varying water densities. In order to get a more accurate bearing on a target, another instrument, called KDB (Kristallbasisgerät), was used. This anvil-shaped sensor was installed in the bows of a boat, on the deck. It was 500mm (19.68in) long, could rotate freely all, and incorporated six microphones. It provided a bearing-to-target with an accuracy of ± 1°. Two Type VII boats – U 1008 and U 393 – were also equipped with SP-Gerät sonar outfits as part of the ‘Ursel’ project, which were very accurate. Another development was the NGH-L system used for detecting torpedoes.

The wireless compartment was equipped with a 150W long-wave 2113 S transmitter operating at a frequency of 300–600 kHz with a 200 W, short-wave S 406 52/563 transmitter operating at 750–15,000 kHz, both manufactured by Telefunken. They were coupled to an EBG control panel, allowing both to be used. Installed receivers were Telefunken T9K39 or Köln T8K44 Großschift, or a shortwave receiver E 437 S operating on the 1500–25,000 kHz band from Telefunken or long-wave T3 PLLa 38 operating on 15–33 kHz and 75–100 kHz. Communications were encrypted with a five-rotor Enigma machine. Towards the end of the war also UHF Lo 10 UK Lorenz wireless sets were installed for direct communications.