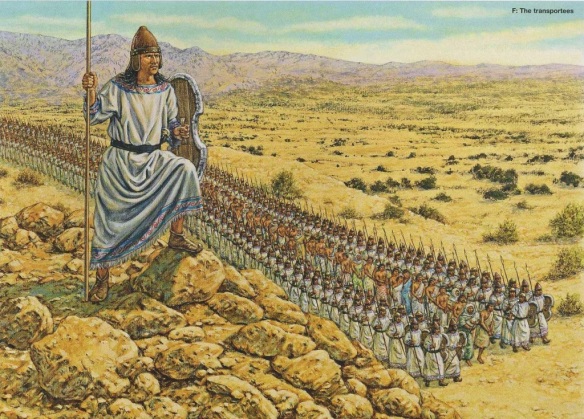 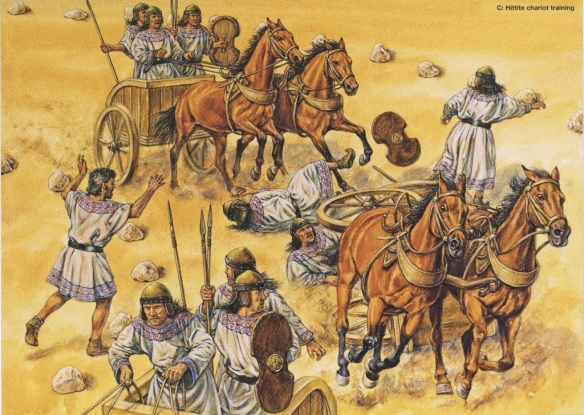 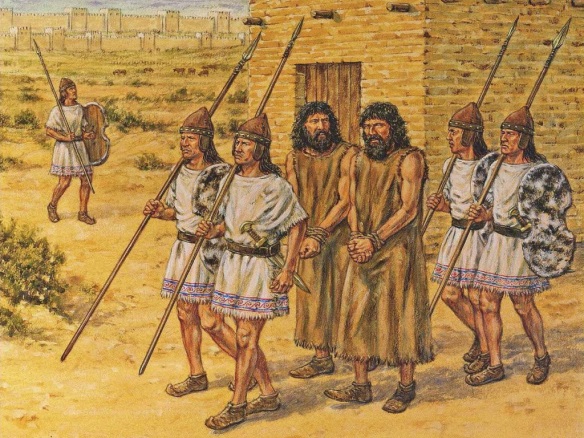 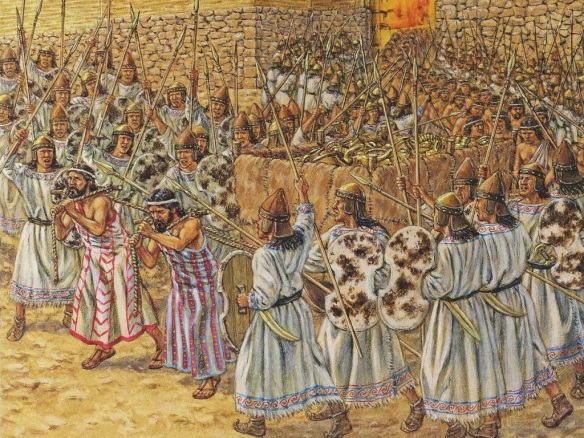 The Hittite first arrived in Anatolia around the time of 2000 B.C. Before their arrival, this region was already inhabited by other groups of people. These groups initially resisted the militaristic advances of the Hittite people, though were eventually overpowered and succumbed to their advances. Within several hundred years, the entire region was under the control of the Hittite king.

This time period is best defined as the later stages of the Bronze Age. The majority of the world at this time utilized bronze as a major resource for tools, weapons, and other everyday items. Bronze was a readily accessible material that was the product of easily workable elements that were quite common. The advantage to using bronze was that it was extremely malleable and did not take extreme heat to be manufactured. The downside to bronze was that it did not keep a sharp edge for long periods of time and was not a very sturdy metal.

These shortcomings of bronze are magnified one hundred fold when you consider that some of the key items made from metal at this time period were related to military needs. Swords, armor, and shields all used bronze in their construction. If an army’s sword became dull or their armor suffered damage, it would be a massive priority for these items to be repaired immediately.

What the Hittite had that other cultures in the region did not was the knowledge of how to make iron. The Hittite had learned the secretive process for extracting iron from rocks containing iron ore. That is not to say that other cultures had not attempted to do the same, but the Hittite were able to understand the best methods for increasing the heat in their forges to a massive degree in order to separate the ore from the base rocks. This concept alone is the main reason that the Hittite was able to unify their nation and expand it to neighboring borders.

The Hittite used this new found metal as a way to create stronger weapons. Their swords, shields, and armor were all crafted using iron as opposed to bronze. The iron was more durable and held a sharper edge over a longer period of time. Considering that many of the military campaigns fought throughout this time were hand-to-hand combat, this gave the Hittite a massive edge over their competitors. The Hittite used these stronger, sharper weapons to continually expand their empire and to overcome rebellions within their own borders.

The Hittite conquered the then existing city-states of the region and unified them all under one authority using their iron weapons and other military technology. At that time, many of these city-states were at war with one another. With the introduction of iron, the Hittite were able to improve not just their military capabilities, but also the tools related to daily functioning.

The Hittites were an agriculturally based society.  They relied heavily on farming and herding as a means to support their empire’s development and sustainability. With the inclusion of iron, farmers were able to begin using iron plows that allowed them to till land that had previously been unusable due to soil conditions. It allowed the Hittite to increase dramatically their output of crops and to support their ever-growing empire.

Another piece of technology that the Hittite utilized was the chariot. The Hittites were not the only race in this region to have access to horses and chariots. What made the Hittite’s use of these weapons unique was how they constructed their chariots. While one or two soldiers may have used a standard chariot, the Hittite designed their chariots to be used by three soldiers. So why would this be advantageous? Consider this notion.

A chariot needs to be driven by at least one person. If the driver of a chariot must focus all of their efforts on controlling the team of horses, how many arrows can they fire? How can they best defend themselves against the swords of an enemy? The Hittite chariots fit three soldiers. This allowed one man to drive the chariot and allowed two more to work effectively as soldiers and focus their efforts on warfare.

The Hittite used these chariots extremely effectively. One of the ancient cultures most connected to chariots is the Egyptian culture. The size advantage of the Hittite’s chariots is what helped them to overcome Egyptian advance into their territory.

The combined effects of Hittite designed chariots and iron made weapons were what gave the Hittite the power to unify their home region of Anatolia and expand their empire. At the height of their power and control, the Hittite king held influence over land that would encompass modern-day Turkey, Syria, and Lebanon. Hittite raids were also successful at striking targets far from their home range as a means of destabilizing neighboring states and allowing the Hittite to gain further influence among their neighbors.

Another aspect that allowed the Hittite to maintain such a firm grip on the entire region of Anatolia was their advanced understanding of commerce and trade. The Hittites were skilled merchants and traders. Their positioning near two strategic coastlines allowed them to have access to maritime trade and further establish lucrative trading ports. This aided the Hittite by providing them with the opportunity to improve their position as a trading partner to rivals of their neighboring enemies. The Hittite also controlled vast areas of land whereby land-based trade caravans from the Far East needed to pass through as a means to reach their final destinations.

While the Hittites understood the process of making iron, their empire existed fully within the Bronze Age. It wasn’t until the empire’s final demise that the Hittite let their secrets of iron working escape their empire to other cultures. This action is what truly ushered in the next age, commonly referred to as the Iron Age.

One of the key portions of accessing records concerning these secretive Hittite people is actually through one of the most well-known books in existence. The Hittites are continually referenced in the Old Testament of the Bible. In fact, biblical references about the Hittite abound. One of the Old Testament’s most famous characters is said to have interacted with the Hittite. Abraham, a foundational individual from ancient times, is said to have purchased a cave from a Hittite in which his wife, Sarah, was buried. This was massively significant, as, before this, Abraham had been engaged in a life that was defined by wandering from region to region. This notion is very similar to the details relating to the origins of the Hittite. Remember that prior to settling in the area then known as Anatolia, the Hittite were wandering people consumed primarily with agricultural development.

So what then happened to the Hittite? To fully answer this question, you should consider some of the factors the Hittite needed to ensure continued success as an empire. The Hittite were susceptible to disease same as any other ancient race. While they did rely on ancient medicines as a means to ward off certain infections, they were not immune to the diseases that commonly ravaged entire nations. An outbreak of plague decimated much of the land and left many dead. Without sufficient manpower to operate the needed positions within the empire, tasks began to go unfinished. These unfinished tasks compounded over time and began a snowball effect that eventually led to the failure of needed systems within the Hittite culture.

Another issue for which the Hittite empire was at fault was the continued cost of unending military campaigns. The Hittite were continually attempting to gain full control over the lands of Syria and beyond. These city centers were far from their home where the Hittite people had the strongest support base. As the Hittite attempted to wrest the control and gain continued support over these lands, they inadvertently overtaxed their own networks of supply and support. Too much was taken for too long and eventually the Hittite found themselves at odds with continuing this unsustainable war effort.

The final cause of the downfall of the Hittite empire can be found in the exact same issue by which they came to the lands of Anatolia. Outsiders whom they called the ‘sea people’ began arriving in untold numbers to their homelands. These people were eventually successful in ousting the Hittite, from their native lands and forcing them to flee to lands to the south where they were forced to settle in new lands and cultures. Their assimilation did not maintain the same success as their initial foray into the lands of Anatolia as they were unable to unify any sort of centralized government in these new lands and had to instead, accept the ways of these new lands.

3 thoughts on “The Hittite People”