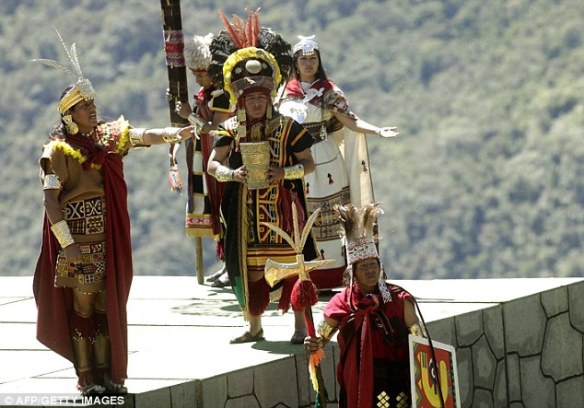 While all-out warfare seems to have been a fact of life in pre-Inca and Inca times throughout the Andes, there were also occasions when it was deemed appropriate for groups to engage in what are commonly referred to as ritual battles. The term used for such affairs in Colonial sources is tinkuy, which may be glossed as “coming together,” such as the confluences of rivers, although it usually connotes unions that occur in the form of clashes or violent encounters. Tinkuys are normally thought to lead to a synthesis—the integration, or mixing of substances or essences of the converging entities. Such encounters might include, for example, two armies meeting in battle (and thereby mixing their blood), two rivers meeting and joining their waters, or a man and a woman coming together in intimate, sexual contact, leading to the mixing of the essences of the two individuals in reproduction. Thus, tinkuy referred not only to two entities coming together but, in the act of doing so, of creating a unity of the beings or essences of the two parties so joined.

Ritual battles occurred on various occasions in Cuzco. For instance, during the month following the initiation of noble youths, which took place at the time of the December solstice, the newly initiated young men met on the plaza in the center of Cuzco. There, dividing themselves into the two social-political groups of hanan (upper) and hurin (lower) Cuzco, they set about pelting each other with a hard cactus fruit, called tunas, or pitahayas. The conflict often intensified, and the boys commonly came to blows, testing their strength against their opponents. These formalized clashes of recent initiates, noted the chronicler Bernabé Cobo, served to demonstrate who was the strongest and bravest. It is also reported in the chronicles that sham battles were staged to prepare the young men for warfare.

Another chronicler, Fernando de Montesinos, described a most unusual form of what could be described as a “ritual battle.” He stated that, if the king wanted to learn the outcome of some battle that was going on at a distance, a priest placed maize kernels in a ceramic container. The grains of corn were named after the captains engaged in the distant battle. The chronicler continues: “The grains themselves then had a great fight, some against others, until the conquered were driven out of the vessel, and then the wizard [priest] told the outcome [of the actual battle] as if he had seen it” (Montesinos 1920 [ca. 1644]).

As for the antiquity of ritual battles, the practice may go back into the pre-Inca past, perhaps as early as the Initial Period. Tinkuys continued through the Colonial period, and in some communities they still occur today. These contemporary battles primarily pit the men of one community against those of a neighboring community, although cases have been reported of ritual battles between hanan and hurin segments of communities. Present-day participants assert that the objective is at least to draw blood (if not to kill an opponent, which does occur occasionally). The spilled blood is said to fertilize the earth and to be a good omen for the fertility of crops and herds.