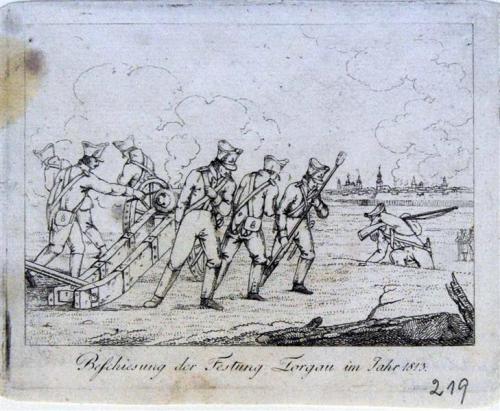 The fortress city of Torgau was situated at an important crossing of the river Elbe in the Kingdom of Saxony. Being of strategic significance in both the spring and fall campaigns of 1813, its possession was contested until it finally fell to the Allies in January 1814.

Torgau was a fortress of the first order and had been well maintained. Its defenses consisted of a strong outer wall, fosses, and external works. There were seven bastion fronts along the perimeter of the wall. There was no wall along the eastern side, as that side ran along the Elbe. A bridgehead of considerable strength stood on the eastern bank, covering the bridge. Three bastions ran along the front of this bridgehead. Its ditches could be flooded; the bridge was wooden and covered. In the city itself there were 557 dwellings. Two external forts, Fort Zinna and Fort Mahla, had been built on the hills to the northeast of Torgau, and there were also two lunettes on each bank.

This fortress town was garrisoned by Saxon troops under the command of General Johann Adolph Freiherr von Thielmann. In the immediate aftermath of the campaign of 1812 in Russia, Frederick August, the king of Saxony, maintained a policy of neutrality. Thielmann had been ordered to deny access to the fortress to any foreign power. He refused to hand it over to Prusso-Russian forces in the spring of 1813, when they advanced into Saxony.

The French victory over the Allies at Lützen, on 2 May 1813, materially altered the situation. While Napoleon pressured Frederick August to join him, he sent General Jean Reynier’s corps toward Torgau. General Pierre François Durutte’s division arrived there on 7 May, but Thielmann refused entry to it. Frederick August acceded to Napoleon’s demands, and on 12 May, Thielmann received orders to join forces with Reynier. He complied, opening the city and fortress to the French, but went over to the Allies with his staff.

For the remainder of the campaign in Germany, Torgau remained in French hands. On 14 September the comte de Narbonne was made governor. Additional defenses were constructed to protect the bridge from fire ships.

After the Battle of Dennewitz on 6 September, a Prussian observation corps took up positions on the east bank, harassing shipping along the great river. On 3 October, the Prussians forced a crossing of the Elbe at Wartenburg and moved along the west bank toward Torgau. On the eighth, Narbonne declared the city in a state of siege. The garrison was around 25,000 men strong, with 199 guns. The Saxon troops left Torgau on 22 October. At the end of the month, a Prussian force under General Friedrich von Tauentzien sealed off the western side. The siege of Torgau now commenced. Throughout November, sorties, raids, and bombardments were undertaken. The besiegers started the construction of a mine. A plague of typhus broke out.

Narbonne attempted to negotiate surrender from 4 to 7 December, but Tauentzien did not accept his proposals. Further talks were held that month, before agreement was finally reached on 20 December. On 10 January 1814 the survivors of the garrison departed. Their losses numbered around 15,000 men.