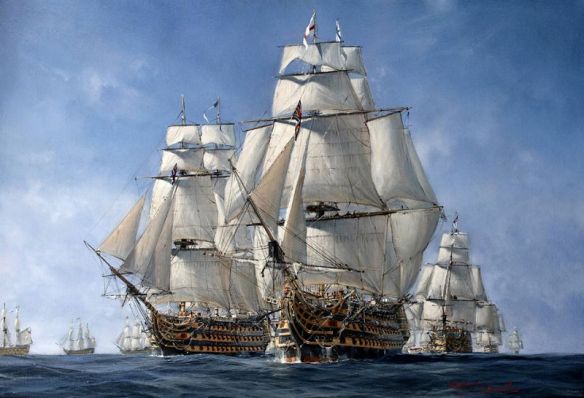 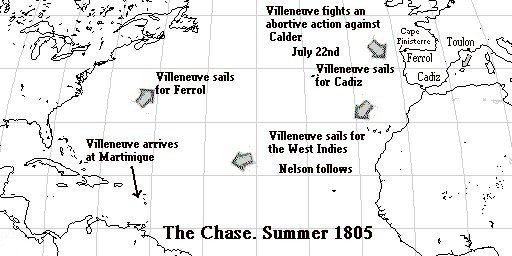 Accurate intelligence in the age of sail was a scarce commodity. Accurate intelligence is, of course, scarce at all times but the sea, in the years before radar and radio, let alone satellite surveillance, was an arena of the unknown. The horizon was an impenetrable barrier, the man-of-war, breasting the waves at six knots or so, a ponderous means of extending a captain’s field of vision beyond it. An admiral with a fleet under command could enlarge his supervision by disposing his men-of-war and their attendant frigates at intervals of a dozen miles or so, the maximum distance at which intervisibility and so intercommunication, masthead to masthead, was possible. Even thus, the transmission of news of a sighting was a haphazard business. Admiral Lord Howe, seeking to establish the whereabouts of a French convoy of 139 merchantmen he knew to be nearby, had to quarter the sea for eight days before he brought its escort to action on the Glorious First of June 1794. The interception was rightly regarded as remarkable. The battle took place 400 miles from land at a time when most sea engagements were fought, as they always had been, within fifty miles of the coast.

Admirals, moreover, did not like to disperse their capital ships for purposes of reconnaissance, needing to keep them concentrated for action lest the enemy were met unexpectedly. The need to gather information always had to be balanced against that of keeping firepower massed under the commander’s hand. The strength of a fleet lay not in that of its individual units but in the line of battle, formed bow to stern at intervals of a few hundred feet. Ships isolated were ships exposed to ‘defeat in detail’, or one by one, by superior numbers. Hence the importance of the capital ships’ scouts, the frigates, smaller and swifter sailers which could be sent to and beyond the horizon in search of the enemy.

No admiral ever had enough frigates. The calls on their service were manifold: as despatch vessels, as commerce raiders, as convoy escorts. Such duties chronically depleted the number available as scouts and ‘repeater ships’, which lay close to but outside the line of battle, copying the signals of the flagship, which were often masked by its near neighbours, so that they were visible from van to rear. The scarcity of frigates was odd. As they were much smaller than battleships, a third or a quarter by displacement, carried far fewer men, perhaps only 150 against 800, and cost only a fifth as much to build, it might be expected that they would have been turned out in much larger numbers. Such was not in practice the case. In 1793, at the start of the Wars of the French Revolution, the Royal Navy had 141 first-, second- and third-rates, battleships with between 100 and 74 guns; of fifth- and sixth-rates, frigates of between 44 and 20 guns, it had only 145;1 by 1798, there were still only 200. Little wonder that Nelson, then the Mediterranean admiral, warned that, if he died, ‘want of frigates would be found written on his heart’.

Essential though frigates were as scouts, their value was restricted by the limitations of the signal system then in use. It was not simply that flags – and flags were the principal means of communication – were difficult to discern at long distance, even with a telescope. No comprehensive system of arranging them to transmit information had yet been devised. Various conventions had been in use since the seventeenth century, such as then, for example, hoisting a red flag at the mizzen-top to order a particular manoeuvre. By the late eighteenth century there had been a great deal of elaboration and in 1782 Admiral Howe, then in command of the Channel Fleet, had issued a codebook, superseding many others, which allowed a commander to say 999 different things with three flags and 9,999 with four. Howe’s signal book was not, however, double-entry. The recipient could work out what a signal meant by looking it up, finding the flags picture by picture on the page. The sender, however, had to know what flags he needed to hoist before he composed his message. Not until 1801, when Home Popham published his Telegraphic Signals or Marine Vocabulary, were sender and recipient put on equal footing. Popham, a sailor of great clarity of mind, simply had a flash of insight into the obvious which had evaded thousands of other sea officers before him. His achievement compares with that of his near contemporary Roget in compiling the first thesaurus. He analysed how language was used and saw that words might be given a numerical value, to be signalled by a set of numerical flags; 212, for example, could be made to stand for ‘cable’, with the numerical flags 2, 1 and 2. Adding a fourth numerical flag, 3, made the signal read ‘Can you spare a cable?’To make the first signal, the sender looked up ‘cable’ in his double-entry book and chose the appropriate set of flags or ‘hoist’; to read it, the recipient looked up 2123 and got the message. By the use of special indicators it could also be signified that flags had alphabetical rather than numerical value and should be read simply as letters, spelling out an unusual word not in the vocabulary. Popham’s final signal book allowed 267,720 signals to be made with twenty-four flags (of which ten doubled as numbers) and 11 special indicators.

His system remains in use to this day. It was not yet so in 1798, when the Royal Navy still sought to speak fluently between ships through the medium of Admiral Howe’s single-entry book. A great deal of time was wasted, therefore, in frigates closing up to each other or to the main body in order to transmit information unambiguously or to receive precise questions or clear orders. The days when a flag lieutenant could snap his telescope shut and confidently interpret to his superior the meaning of a flash of coloured bunting glimpsed at the extreme limit of visibility on a clear Mediterranean day lay well in the future.

The fallibility of signalling was not a crucial factor in the conduct of maritime operations in the last decade of the eighteenth century. It counted for much less than want of frigates. It counted as a factor, nonetheless, particularly to an admiral like Horatio Nelson, whose mind never rested, who calculated the relative positions of ships and shorelines as a master chess player does pieces and squares, who consumed information of every sort with the compulsion of an addict, who sought decision in battle with the relentlessness of a great financier poised to obliterate his commercial competitors. Home Popham’s signalling system would certainly have assisted him in his searches had it been available; when it became so a very few years later, Nelson enthusiastically embraced it; indeed, the most famous flag signal sent, ‘England Expects’, was made at the opening of the Battle of Trafalgar on 21 October 1805, with eight Popham hoists and ‘Duty’ spelt out alphabetically.

On Trafalgar Day Nelson had the combined French–Spanish fleet clear in view. The encounter had come at the end of a long chase which had begun in May, taken him across the Atlantic to reach the West Indies in June, back again to the mouth of the Channel in August, and finally south to the Straits of Gibraltar in September, where he blockaded Cadiz until the enemy put to sea in October. He had had a number of false starts and followed a number of false trails but once Admiral Villeneuve had cleared the Straits of Gibraltar from the Mediterranean and set off into the deep Atlantic, Nelson had been able to make the assumption with some certainty that the French were heading for the West Indies. The campaign of Trafalgar was to prove a triumph of strategic manoeuvre. As an intelligence operation, it was not, at least in its later stages, one of complexity.

The contrast with Nelson’s earlier pursuit, discovery and destruction of a French fleet was extreme. In 1798 Nelson, recently promoted to independent command, was appointed to lead a British squadron back into the Mediterranean, from which it had been absent since late 1796, and to mount watch outside Toulon, the principal enemy naval base in the south of France. It was known that General Napoleon Bonaparte was in command of an army assembling there, that transports were gathering also, under the protection of a French battle fleet, and that an amphibious expedition was planned, directed against British interests. The question was which and where? Britain itself? Ireland? Southern Italy? Malta? Turkey? Egypt? All lay within Napoleon’s operational reach and some, Malta in particular, were stepping-stones to others. Beyond Egypt lay India, where Britain was rebuilding a substitute for the overseas empire lost in North America in 1783. If Napoleon could put to sea undetected, the Mediterranean would swallow his tracks and Nelson would discover where he had gone only when he had done his worst. The menace was guaranteed to perturb a watcher day and night. Nelson was perturbed. Before the French left port he was anticipating their departure for ‘Sicily, Malta and Sardinia’ and ‘to finish the King of Naples at a blow’ but also perhaps for ‘Malaga and [a] march through Spain’ to invade Portugal, Britain’s longest-standing ally. After they left, in late May, he was in hot pursuit, sometimes on the right track, sometimes the wrong, sometimes behind, sometimes ahead, sometimes in the wrong continent altogether. In the end he ran his quarry to earth. The scent had died in his nostrils several times, however, and his own false calculations had led him astray. Not until one o’clock in the afternoon of 1 August, when the lookout on HMS Zealous reported masts in Aboukir Bay, east of the Nile delta, had Nelson reassurance that the chase begun seventy-three days earlier had been brought to conclusion. How it had makes one of the most arresting operational intelligence stories of history.