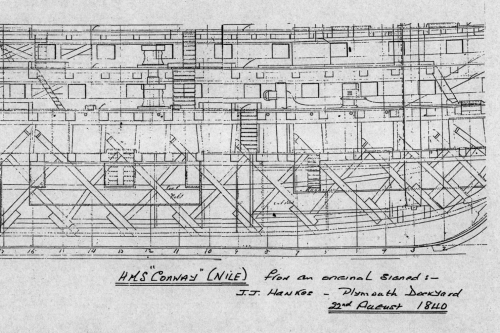 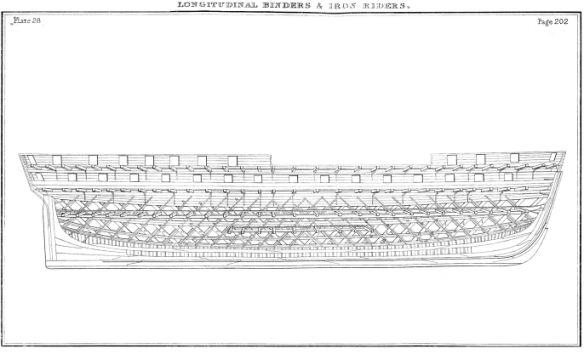 “The strength of a ship. Let its construction be what it may, can never exceed that of its weakest parts.” Sir Robert Seppings, the ship’s designer and constructor in 1814.

These ships were phenomenally strong transversally with 13″ square frames spaced only a couple of inches apart and clad inside and out with 13″ thick planking, resulting in a shipside over 3 foot thick of what was virtually solid oak. This was further braced transversely by rows of deck beams at 7 ft vertical intervals and their oversize grown oak beam knees (wooden brackets) which extended to the deck below. So the shipside strength was massive – it was of course their armour against enemy cannon shot. But by contrast the keels of these ships were surprisingly puny. Tapering towards bow and stern and having a maximum section of only 19″ square amidships, usually of elm, and made up of a maximum of eight lengths each not less than 25 ft long, which were simply laid over each other with scarfs (their ends cut with matching diagonal cuts) and fastened together with the regulation eight nails. Thus the keel contributed nothing at all to longitudinal strength. For this these ships are best thought of as a primitive compound girder, relying on the longitudinal planking of their multiple decks supported by a system of stanchions (posts), which together with their hull planking provided their only longitudinal rigidity, although Conway was stronger than most due to Seppings’ revolutionary system of diagonal bracing [see plan] While all of this was said to be ‘bolted’ together, these ‘bolts’ did not have threads and nuts as we now think of bolts, but were no more than what today we would call nails (albeit typically an inch and a quarter in diameter) which were laboriously hammered into pre-drilled undersize holes. So these ships were notoriously weak longitudinally, and they must have worked abominably in a seaway. Indeed, to quote C. Napean Longridge (“The Anatomy of Nelson’s ships”): “All of these ships started to hog (arch their ‘backs’) as soon as they took to the water.

Whether adhering rigidly to Fighting Instructions or breaking into a melée, the Royal Navy never suffered one decisive defeat at sea after the Battle of Beachy Head (1690). The Great Age of Fighting then passed its peak, and there would be only one more large sailing fleet battle, the one-sided slaughter of an Egyptian-Turkish squadron by a combined fleet composed of British, French, and Russian warships at Navarino Bay in 1827.

Nonetheless, the major maritime powers continued to build great wooden ships-of-the-line, and they grew in size and gun power, thanks in large measure, in the Royal Navy, to the Symonds construction reforms noted above. After Trafalgar, the 120-gun warship became the standard first-rate. The examples of the captured enemy warships and the frigate-to-frigate U. S. victories in the War of 1812 could no longer be ignored or explained away. It is perhaps an indication of the increased power of the new first-rates that the Royal Navy scrapped its last fireships just after Trafalgar and the last bomb ketch in 1836. Yet there was little change in the heart and purpose of the wooden sailing first-rate: its guns. The 42-pounders had been discarded toward the end of the previous century in the belief that they were harder to work than the 32-pounder and that they would strain the ship’s frame in rough weather; they now returned in the much more stoutly built post-Trafalgar capital ships, and even 48- and 68-pounders were introduced. Thus the great Marlborough carried 68-, 48-, and 32-pounders as armament. The actual firing of the guns was greatly improved by the introduction of the flintlock, detonating tube, and elevating screw.

At about this time the Royal Navy began to adopt the old Venetian method of constructing its warships under cover, finally rejecting the unexamined old adage that open-air construction somehow beneficently “aged” the timbers. Actually, timber can age about as well under cover, and construction could proceed much more quickly, unhindered by bad weather.

The methods of construction of the wooden hull were transformed by the naval constructor Sir Robert Seppings, and these methods made it possible to increase battleship dimensions by one quarter. Seppings, as surveyor of the Royal Navy, applied the diagonal truss system, which he had observed in contemporary bridges, to the hulls of wooden warships. The Seppings truss system helped battleship hulls to resist hogging, that is, the arching of the keel; sagging, which is just the opposite movement; and horizontal shearing, all of which put pressures on the wooden hull as it reacted to the water, only weakly resisted by the traditional system of vertical framing. Seppings’s diagonal trusses formed a network of triangles between the frames, adding considerably to hull strength and making possible much larger wooden warships. He later advocated the use of iron strapping and iron structural parts to replace those of wood. Without these construction innovations, it is difficult to see how the great wooden steam battleships could have carried their own weight. Seppings also strengthened wooden hulls against shot by his use of solid circular prows and a reinforced circular stern, following upon the Nelsonian tactic of breaking through the enemy line, exposing the vulnerable bow and stern to concentrated enemy fire. By the 1850s, John Edye had substantially advanced Seppings’s work by combining parallel frames with strong iron riders. The work of Symonds, Seppings, and Edye, however, was for the most part rule-of-thumb, and their scientific basis was not worked out until 1866 by John Rankine and Edward James Reed (later Sir Edward Reed). Even then, the Royal Navy continued to lag behind the French in methods and principles of naval architecture, and did not establish its School of Naval Architecture until 1864, well after the French. Great Britain’s undoubted naval supremacy rested upon its superior industrial base, as well as its good fortune in having men of genius at the right time administering, designing, and building its new battleships, both wooden and, later, ironclad.