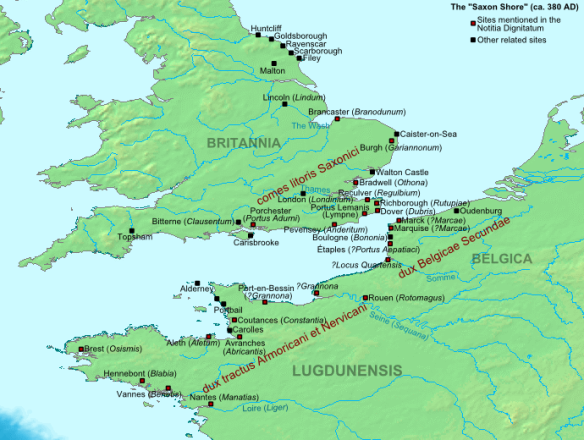 Bases and command sectors of the Saxon Shore system

After Actium, as we have seen, Augustus concentrated his ships at two bases, Misenum and Ravenna, to watch the western and eastern Mediterranean. These two ports continued to be the chief bases of the Roman fleets for three centuries or more. Under the Empire, the fleets had, we may think, not much to do. Little is heard about piracy or other seaborne hazards. The ships served to transport troops to new postings, and protect the grain supply to the city. Detachments from both Misenum and Ravenna were based in Rome, to handle the awnings at theatres and amphitheatres there. The overall manpower of both fleets remained at a high level, with about 10,000 sailors at each base. Under Augustus and his immediate successors the fleets were commanded by equestrian officers, often ex-legionary tribunes, and later by freedmen of the Emperor’s household. But after AD 70 the commands were integrated into the equestrian civil service, and became two of the most senior posts; the Elder Pliny, encyclopaedist, naturalist and a senior procurator in the government service, was prefect of the fleet at Misenum when he lost his life in the eruption of Vesuvius in AD 79. Professional admirals in the Hellenistic mould, briefly renascent in the Civil Wars of the Late Republic, are not heard of again, nor (with very few exceptions) are the squadrons of the eastern dynasts; these were incorporated along with the kingdoms and principalities into the Roman system. Control of a fleet no longer required any professional skills in seafaring, or a particular interest in naval warfare; administrative competence was the only expertise demanded. Detached squadrons on the Rhine, Danube and the English Channel played a more serious role in the maintenance of security in the frontier context. Here again their commanders were equestrians in the course of a procuratorial career.

The fleets’ manpower was drawn from free-born provincials, like the auxiliaries; slaves were not used, as in popular modern tradition. The Ravenna fleet drew a substantial number of men from the Balkan provinces and Pannonia, the Misenum fleet from Sardinia, Corsica, Africa and Egypt. No experience of sailing, or a home on the coast, were deemed of special importance in the selection of men, any more than in modern navies. The men served 26 years (one year more than the legionaries and auxiliaries), receiving-like the latter -citizenship and regularisation of marriage on discharge. The annual cost of the legions, auxilia, and navy in the early first century AD may have amounted to more than 400 million sesterces, a large proportion of the empire’s disposable income; a pay rise will have had serious financial implications.

From the time of Vespasian sailors began to use Latin names, and this general improvement in status is marked also by the award, probably made under Domitian, of the title praetoria to both main fleets, indicating an acceptance of their role in the central defence of the Emperor’s position. The title matches the cohortes praetoriae of the imperial bodyguard. The civil war of AD 68-69 saw the creation of legio I Adiutrix from the fleet at Misenum, and legio II Adiutrix from Ravenna; the latter saw service under Agricola in Britain. The title Adiutrix indicates that they were envisaged at first as offering `Support’ or `Assistance’ to the regular forces. It seems that founder members of both legions remained non-citizens until discharge, but fresh drafts were drawn from the normal sources thereafter so that they were quickly assimilated. After Actium we hear no more of legions serving on shipboard, presumably because the military presence of such heavily armed infantry was deemed no longer necessary.

Emperor Gallus had no time to respond to Persian king Sapor’s devastation of the Syrian provinces, and Sapor’s invasion was not his only problem. Bands of “Skythai” had taken to the sea in the summer of 252 AD, penetrated the Bosphorus, and raided along the coast of Asia Minor, burning the great temple of Artemis at Ephesus. The process of refortification in Asia Minor was only beginning, and the militarization of the population was perhaps less advanced here than in other provinces. What resistance could be offered was offered by local police forces. More significantly, though, the fact of this raid revealed a glaring hole in Rome’s maritime defenses. There was a fleet on the Rhine that was charged with preventing raiders crossing the North Sea, and there appears to have been a fleet on the Danube, though how well organized it was after the disasters of 250-51 is a matter for conjecture (the ability of the “Skythai” to sail past it may be the best indication). Otherwise the two main fleets of the Roman Empire were those of Misenum and Ravenna. Their primary duties had long been the protection of lines of communication from Italy to the provinces and, probably, the suppression of piracy. The great battle fleets of the late republic, in the absence of enemies, had long since disappeared, and there is no reason to think that there were any substantial forces available to patrol the coasts of the Aegean. It would appear that the “Skythai” went home when they felt that they had acquired enough plunder.

Co-Emperor Maximian was a relative newcomer to the Gallic scene, and he had plainly arrived with a mandate to govern. Carausius’ fleet and the substantial garrison of Britain were not willing to submit on Maximian’s terms, and it is a mark of the ongoing inability of the central government to instill a sense of its own overwhelming power in the frontier regions. Indeed, it is notable that the region where Carausius held power was one significant area where the reformed coinage of Aurelian had not circulated with any success, and it is interesting that the author of the Panegyric to Constantius I of 297 or 298 says that he had the support of Gallic merchants. Evidence from Dover and Boulogne suggests that neither place had remained a base for naval operations in the decade and a half before Carausius, which would suggest that his effort to control raiders from the north was a relatively new initiative. He may have appeared as a person who would provide the security that the central government had not.

In 288 Maximian defeated Carausius’ troops on the Lower Rhine and captured Rouen. In the next year he thought that he could produce a fleet of his own that could wrest control of the English Channel. In this, like so many men after him whose experience was of land warfare, he was wrong. It seems to have taken a year to build the fleet, and much less time to lose it – possibly in a storm during the spring of 290. The failure encouraged Carausius, who regained several cities on the mainland, including Boulogne, Amiens, and Rouen. The result of the summer’s campaign in 290 plainly led to some difficulty. Emperor Diocletian appears to have broken off a tour of the eastern provinces in which he seems to have attempted to win control of the desert lands that separated Rome from Persia in southeastern Syria, Jordan, and northern Saudi Arabia. The Palmyrenes had previously controlled the tribes in this area, and it may be that, while establishing a new military camp at Palmyra, Diocletian felt it necessary to win back control of former zones of influence. Indeed, the movements of Diocletian may provide the best evidence for events in Gaul: he was at Emesa on May 10 and at Sirmium on the Danube by July 1. The haste with which he moved may suggest that he had received news of a crisis in the west stemming from an ill-timed naval effort in the early spring.

1 thought on “The Roman Navy after Actium”