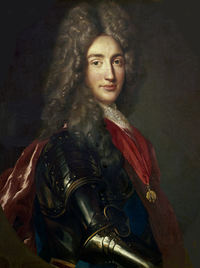 Berwick was a bastard of James Duke of York (later James II) and Arabella Churchill (sister of John Churchill duke of Marlborough). At age 7 Berwick was sent to France in order to raise him in the catholic religion. There he went to college of Juilly, and later to the college of Plessis till 1684. Later that year he was visited to England and on his return he was sent to another college. After his father had become king in February 1685, Berwick was sent to Paris. After finishing his last lessons there he left for Hungary in order to start a military career. In Hungary he participated in the long siege of Buda in 1686. After the campaign he returned to England where he received the title Duke of Berwick only to return to Hungary in the spring of 1687. There he served as Colonel Commandant of an Austrian Cavalry regiment in the great victory of Mohacs. After the campaign Berwick got an Austrian grade that was about equivalent to Maréchal de Camp.

After returning to England in fall Berwick became colonel of an English infantry regiment as well as of a regiment of the Horse Guards. In 1688 Berwick stayed in England and saw the Prince of Orange arrive in England in November. In the Salisbury affair Berwick played a role in returning the four regiments that Lord Cornbury had tried to bring over to that prince. Apart from this Berwick tried to hold on to the city of Portsmouth, but failed due to the fact that the fleet blocked it from the sea and the militia from land. He therefore went to the king and hastened on to France to announce his arrival.

After realizing that most of Ireland stayed loyal to him James II went to Ireland and took Berwick with him, arriving in Kinsale on 17 March 1689. One of his first actions was to participate in the blockade of Londonderry. During this siege Berwick would receive his only wound. Because he did not like the affair of Londonderry Berwick asked to take command of a detachment against Enniskillen in July. Shortly afterwards he was made Lieutenant General. Still in July Berwick was ordered back to Londonderry to reinforce the siege. When this siege had been lifted Berwick returned to Dublin and next faced Schomberg for a while. In 1690 Berwick commanded part of King James’ army in the battle of the Boyne. After this defeat Berwick successfully defended Limerick.

In January 1691 Berwick was ordered back to France. Here he accompanied Louis XIV as volunteer to the siege of Mons. He next participated in the battle of Leuze. After Ireland had been lost by the capitulation of Limerick the Irish troops had been transported to Brest, and reformed into 18 infantry battalions, 2 dragoon battalions and 2 Guard companies of which Berwick got one. In 1692 these marched to La Hogue in order to prepare for an invasion of England. Berwick had the chagrin to see the French fleet return to La Hogue after it had been beaten and saw the vessels burning in the Bay of La Hogue. For him there was nothing more to do then marching to Flanders in June.

In Flanders Berwick was present at the battle of Steenkerken in August 1692. In 1693 Berwick was appointed as a French Lieutenant General. He fought in that capacity in the battle of Neerwinden of July 1693. While fighting in the village he was cut off and taken prisoner by brigadier Churchill. He was however soon exchanged for the Duke of Ormond. Berwick’s last action of this campaign was commanding a large detachment that was sent to Mons. In the 1694 campaign Berwick also served in Flanders but nothing special happened. In the 1695 campaign Berwick served under Villeroy. While not enjoying any success in lifting the siege of Namur Berwick saw the bombardment of Brussel. In 1696 Berwick went to London in disguise in an attempt to organize an uprising and another invasion attempt. The whole affair came to nothing and Berwick went back to Calais. In 1697 Berwick fought the last campaign of this war that ended with the peace of Rijswijk and its recognition of William III as king of England.

During the Spanish Succession

In the beginning of the Spanish Succession War Berwick was sent to Rome where it was hoped he could command a papal army against the Austrians. However, the affair came to nothing and so Berwick went to Flanders where he participated in the preparations for war. In 1702 Berwick was in Boufflers’ army that lost Keyserswerth and the lower Meuse. Berwick himself got command of some detachments, but also did not achieve anything noteworthy. In 1703 Berwick served under Villeroy and was present when the armies of Vileroy and Ouwerkerk faced each other at Maastricht. At the end of this campaign Berwick had himself naturalized as a Frenchman.

In 1704 Berwick entered high command by getting appointed as commander of 18 battalions and 19 Squadrons that were sent as an expeditionary force to Spain. With these he successfully invaded part of Portugal but saw himself forced to retreat at the end of the campaign. In 1705 Berwick commanded in the Cévennes where he had some Huguenots burned alive. In October 1705 he was ordered to besiege Nice, of which the fortress capitulated on 4 January 1706. In February Berwick became Marshal of France and was ordered to Spain. Here he again commanded on the Portuguese border while Felipe besieged Barcelona. The campaign did not go well for Berwick because Madrid was lost to the Alliance troops. A general uprising would however enable the Bourbon troops to regain Madrid and prompted the alliance to retreat to Valencia with heavy losses.

In 1707 Berwick fought the decisive victory of Almanza. Apart from spreading his fame it made him duke of Lerida and Grandee of Spain. He was however ordered back to France, and destined to command under max Emanuel on the Rhine. On learning that Eugen marched to Flanders Berwick took a considerable detachment and went to Flanders by the Ardennes. After the defeat of Oudenaarde and the subsequent retreat to the north it fell on Berwick to organize the defense of the French borders. During the siege of Lille Berwick did not succeed in taking command and played only a minor role. In 1709 he was destined for the defense of the frontiers with Italy from whence he came back to Flanders on 18 October 1709. In the winter of 1709 he was made Duke of Warthi (renamed to Fitz-James) and pair of France, the title and possessions to be inherited by the children of his second marriage. In 1710 Berwick was to command the Flanders army till Villars had been cured from his wounds of Malplaguet. He did so for a while and next moved to Chambéry to take up his post of commander of the south east frontier. This was the position were Berwick stayed till the armistice that preceded the peace of Utrecht. In the last act of the war Berwick was in Spain taking Barcelona.

In 1695 Berwick married the daughter of the Irish count of Clanricard. From this marriage he had a son to whom he later ceded the Duchy of Liria in Spain. In April 1700 he married Miss Bulkeley. Their children would inherit Berwick’s French possessions.

Berwick as a general

Berwick became one of France’s greatest commanders and enjoys a great reputation. If one wants to determine the quality of his generalship one should however come up with facts. It is easy to ascertain that Berwick did not suffer any big defeats apart from losing Madrid in 1706 while strongly outnumbered. So this at least makes Berwick a capable general. One could then ask if Berwick was a great general. He was responsible for the decisive victory of Almanza that crippled Charles’s cause in Spain. At Almanza he however enjoyed a very strong numerical superiority, and I suppose that many other generals would have been able to win this battle. For claiming that Berwick was a great general one should point to him winning at least one large engagement fought on equal terms. Failing to do so means one cannot claim him to be the equal of Eugen and Marlborough. I would therefore say that Berwick was a very capable general, but did not prove himself to be a great general.

1687: Colonel Commandant of a cavalry regiment in Austrian Service

1687: English colonel of infantry and the Horse Guards

1695: Captain General of the Jacobite army (for what it’s worth)

1695: Goes to London undercover to arrange an uprising but fails

1703: Naturalized as a Frenchman

1703: Dec appointed commander of an army into Spain

1704: November knight of the Golden Fleece

1720: Member of the Regency Council

1690: Commanding at Newry and Dundalk

1690: July battle of the Boyne Commanding the cavalry of the right wing

1692: August present at battle of Steenkerken

1693: Taken prisoner at Neerwinden, exchanged for the duke of Ormonde

1695: Present at the bombardment of Brussel

1702: Commanding part of Boufflers forces that marched to Nijmegen

1704: February Arrives in Madrid commanding an army of 18 Battalions and 19 Squadrons to support Philip

1705: Commander of Languedoc to quell the uprising of the Cevennes

1706: March in Madrid again does not succeed in preventing Galway from entering Madrid

1707: 25 April achieves a decisive victory at Almansa, leading to the occupation of Valencia and Arragon

1709-1712 Commanding in the Dauphiné against Savoy and the empire

1719: June-Oct commanding the French he takes Fontarabia, St Sebastian and Urgel from Spain

1733: Commanding on the Rhine against Austria

1734: Killed by artillery in the battle of Philipsbourg