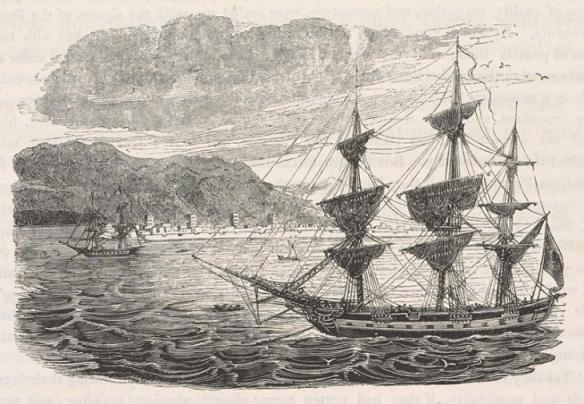 The Portuguese were the first European mariners to enter the Persian Gulf in force in the modern period. They dominated the Gulf from the early 16th century until the arrival of the British and Dutch in the early 17th century. With help from the East India Company, Shah Abbas of Persia drove the Portuguese out of their stronghold on Kharg Island in 1622. From that point onward, British commercial interests grew in importance even as Portuguese fortunes declined. But the Persian Gulf remained a strategic afterthought to British policymakers for almost 200 more years.

During the late 18th century, particularly after the death of the Shah Karim Khan in 1779, Persia lost control of the Gulf. The result was increased competition and conflict among the various coastal tribes of the Persian Gulf. That conflict devolved into raiding and, in British eyes, piracy. Arab corsairs based on the western coast of the Arabian Peninsula ranged far out into the Indian Ocean, threatening British shipping there as well as in the Persian Gulf.

The increase in piracy negatively impacted British trade in the region. Since the East India Companís trade in the Persian Gulf was relatively limited, it made no effort to suppress piracy in the Gulf. But independent British merchants, known as “country traders,” were affected. These country traders developed fairly substantial and lucrative trade relationships in the Gulf. They exchanged British manufactured goods for pearls, Persian silks, and specie that were used in the China trade. Even though the Arabs normally left the well-armed East India Company vessels alone, they sometimes attacked the smaller, more vulnerable country traders. British merchants, of course, condemned such transgressions and pressed both the British Government and East India Company to take action.

The strategic outlook also changed at the beginning of the 19th century. Because the Persian Gulf was one of the primary mail links between the United Kingdom and India, the pirates impinged on official Britain when they attacked British mail ships. Even more important, the French expedition to Egypt (1798-1801) and France’s short-lived alliance with the Shah of Persia (1807-1809) raised the threat of French invasion through India’s northwest territories. British policymakers began to view the Persian Gulf as a buffer zone, protecting India’s western flank.

The death of the Sultan of Oman in November 1804 led to further aggression against British merchant shipping in the Gulf. At the time of the Sultan’s death, the British were actively pursuing an alliance with Oman. East India Company leaders realized that Oman, because of its location at the entrance to the Persian Gulf, was perfectly situated to restrict French and Dutch access to the Gulf. But Britain’s relationship with Oman put it at odds with one of the tribes most involved in piracy. The al-Qawasim were nominal vassals of the Sultan of Oman, but when he died, they reneged on their allegiance and broke away from Oman. Britain became a de facto enemy of the al-Qawasim. But that circumstance had distinct advantages since suppression of piracy in the Gulf not only would appease merchant and shipping interests in Britain but also would enhance Great Britain’s strategic relationship with Oman.

All three conditions that facilitate piracy are readily apparent when considering the Persian Gulf. The al-Qawasim were ideally situated geographically to perpetrate acts of piracy. The tribe’s territory included some 25 coastal towns on the western side of the Arabian Peninsula from the tip south to Dubai. Its main port was Ras al-Khaymah, which is located some 50 miles from the northern tip of the Arabian Peninsula. At that point, the Strait of Hormuz is only about 30 miles wide. Thus, the al-Qawasim could easily control traffic entering or leaving the Persian Gulf. The decline of Persian control of the Gulf and the death of the Sultan of Oman led to political turmoil, which facilitated piracy in the Gulf. Furthermore, since the United Kingdom was fully involved in the Napoleonic Wars, the British lacked the resources to aggressively respond to piracy in the Persian Gulf. Since the al-Qawasim depended on the sea for their existence, whether by trading, harvesting pearls, or raiding, there was considerable land-based support for their piratical activities within their territory as well.

The attacks began in the last quarter of the 18th century. In December 1778, six al-Qawasim vessels attacked a British ship carrying official dispatches. After a running battle that lasted 3 days, the British ship succumbed and was taken to Ras al-Khaymah as a prize. Encouraged by their success, the al-Qawasim assaulted two more British vessels the next year. The most significant incident occurred in October 1797 when the al-Qawasim stormed the East India Company cruiser Viper while in port in Bushehr. Although the company ship drove off the attackers, Viper suffered 32 casualties out of a crew of 65.

After they broke away from Oman, the al-Qawasim began levying tolls on all shipping entering or leaving the Gulf. When the British refused to pay the toll, the al-Qawasim retaliated by raiding British shipping. They captured two British ships in 1804 and attacked a 24-gun East India Company cruiser in January 1805. There was a short respite after the Omanis, led by the British Resident in Muscat, blockaded the main al- Qawasim fleet in Ras al-Khaymah and forced them to submit.

The truce did not, however, last long. In the meantime, the al- Qawasim continued to consolidate their power. By 1808, the al-Qawasim fleet numbered some 63 large vessels, 810 small dhows, and 18,000 to 25,000 fighters. In April 1808, two al-Qawasim dhows attacked another East India Company ship, the Fury (6 guns). Once the summer pearling season ended, the al-Qawasim resumed the war against the United Kingdom. The violence quickly escalated. When they captured the East India Company schooner Sylph (8 guns) in October 1808, the pirates killed 22 crewmembers. Only the captain survived. Wounded when the Arabs took the ship, the captain hid in a storeroom below deck and was rescued when the HMS La Nereide (38 guns) recaptured the Sylph as the raiders sailed her back to Ras al-Khaymah. The next month, some 40 al-Qawasim dhows entered the Indian Ocean and wreaked havoc on British and Indian shipping. Within a short time, they captured 20 merchant vessels and shut down commerce along the western coast of India.

This proved too much for the East India Company to accept so, in September 1809, a combined land and naval force was dispatched to the Persian Gulf to deal with the pirates. The force included 2 Royal Navy frigates, 8 East India Company cruisers, 1 East India Company bomb ketch, and 1,300 soldiers, half of whom were Europeans. Its primary objective was Ras al-Khaymah, which was assaulted and captured on 13 November 1809. Company soldiers sacked the town and burned 60 dhows trapped in the harbor. Later, the British force attacked two al-Qawasim strongholds in Persia: Linga and Luft.

British operations against the al-Qawasim pirates demonstrate the difficulty of trying to eliminate piracy using primarily naval forces. Although the British inflicted a substantial amount of damage on the al- Qawasim, the impact of the 1809 expedition was limited. Once the British returned to India, the al-Qawasim quickly recuperated. By the fall of 1813, al-Qawasim dhows once again hunted for prey off the coast of India. Further pirate cruises were conducted in the spring and fall of 1814. The al-Qawasim acted even more aggressively in the Persian Gulf, attacking two American, one French, and three Indian ships. In 1816, the British sent another expedition to punish the pirates, but it was even less effective because the naval force limited its actions to merely bombarding Ras al- Khaymah. During the 1817-1818 trading season, the situation was so bad that convoys were used to mitigate the risk of attack.

By the end of 1818, the situation was ripe for a more forceful response to the pirates. By that date, the British successfully concluded two wars in India, the Pindari and Mahratta Wars, and now had sufficient forces available to mount a more substantial attack on the al-Qawasim. Major General Sir William Grant-Keir organized and led this expedition. His force included 1,450 European soldiers and 2,100 Sepoys; the HMS Liverpool, a 50-gun frigate, and the HMS Curlew, an 18-gun brig; and a 14-gun East India Company cruiser. The HMS Eden (24 guns) and seven East India Company warships were already in the Persian Gulf and joined the task force once it arrived in the Gulf.

The British force anchored off Ras al-Khaymah on 4 December 1819. The troops landed southwest of the town and advanced to within 300 yards of the city walls. There, they erected entrenchments and set up artillery to bombard the fortifications. The bombardment continued for 2 days. By 6 December, it was clear that the 12- and 18-pounders were not powerful enough to knock down the town’s walls, so sailors brought two 24-pounders ashore. They began firing on 8 December and continued until Grant-Keir’s troops assaulted Ras al-Khaymah on 9 December. Meanwhile, the Arabs abandoned the city, so the troops entered unopposed. Over the next few days, the British force occupied itself by destroying the town’s fortifications and burning all of the dhows in the harbor.

Over the next few weeks, realizing the power of the British force, all of the leading sheiks traveled to Ras al-Khaymah and submitted to General Grant-Keir. On 8 January 1820, they signed the General Treaty of Peace. The most pertinent provisions of this treaty required all signatories to suppress piracy and refrain from killing captives. If they failed to do so, other parties, that is, the United Kingdom, could step in and take action. From this point forward, acts of piracy in the Persian Gulf declined precipitously. Moreover, when they did occur, the local sheik acted quickly to punish the deed before the British stepped in to rectify the situation.

British antipiracy operations in the Persian Gulf clearly demonstrate the need to eliminate shore havens. The first two British expeditions were of limited value because the land element was either insufficient or nonexistent. Even though the first expedition captured Ras al-Khaymah and destroyed several more towns, its impact was short lived because the British force soon sailed away. Once they were gone, the Arabs resumed acting as they had before the British arrived. The second expedition, which made no attempt to conduct operations ashore, was totally ineffective. Only the third expedition, which included a substantial land component, was successful. This force had enough troops to insinuate that the British were there to stay and intimidate many Arab groups, not just the al-Qawasim, into signing the General Treaty of Peace.