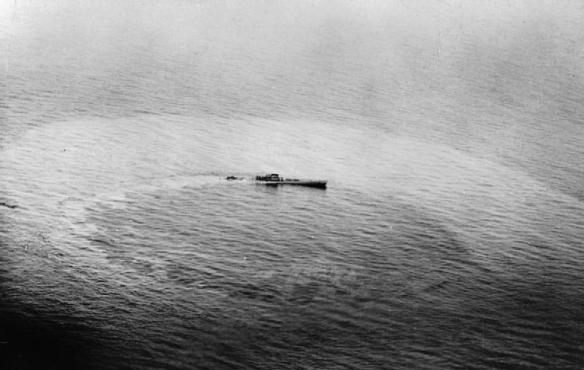 U 459, a Type XIV supply submarine (known as a “milch cow”) sinking after being attacked by a Vickers Wellington.

A new Western Approaches commander, Admiral Max Horton, organized hunter-killer groups of ASW aircraft, escort carriers, and fast escorts as greater supplies of each weapons system became available. More U-boats failed to return to home ports as a result. Also notable were pioneering ASW tactics developed by Royal Navy Captain John Walker, first in his role in convoy escort duty then as commander of Second Support Group. This new offensive-mindedness was approved by Allied leaders at the Casablanca Conference (January 14-24, 1943). Five full Support Groups, each with at least one escort carrier, were now formed to take the fight in the Atlantic to the U-boats. Where escorts previously sought to suppress U-boats while their convoy steamed away, Support Groups instead steamed at flank speed toward any convoy that reported U-boat action. They then remained in the area to hunt down and kill the enemy, long enough that he could no longer stay submerged or actively driving him to the surface or sending him to the bottom. An Atlantic Convoy Conference, held in Washington in March 1943, redistributed area responsibility among the three major navies. The RCN assumed control of convoys north of New York and west of 47° longitude, the USN henceforth made its major effort farther south, while the RN controlled the Western Approaches and home waters. German production meant that Dönitz just then achieved his “decisive” 400 U-boat fleet. The protracted, climactic phase of the Battle of the Atlantic thus took place from January to July, 1943. A record 170 U-boats were actively deployed in March, attacking 11 convoys and sinking numerous merchantmen. But most convoys got through to Britain unsighted by any German, while improved ASW tactics took a count of 15 U-boats. Such attrition of experienced crews and skippers could not be borne for long by the Kriegsmarine. More U-boats went down in April, while 40 boats were lost to Dönitz in May. In return, just six convoyed merchantmen were sunk.

The returns from the dozens of U-boats deployed to the North Atlantic run in the two-week period from May 9 to May 23 were abysmal. Assisted by B-dienst information, they had found six out of seven eastbound and westbound convoys comprising about 277 merchant ships, outwitted only by Halifax 238. From the six convoys found, the U-boats sank only six ships for about 35,000 tons.

In return, Allied forces sank fifteen U-boats in these convoy battles: seven by land-based aircraft unassisted by surface ships, five by surface ships, two by “jeep’· carrier aircraft, and one by a land-based aircraft teamed with a surface ship. No less important, in that same period, Allied forces so badly damaged eight other U-boats that they were forced to abort, one of them escorted by an undamaged boat (U-359) that must be counted as a ninth abort. Total U-boat casualties in this two-week period on the North Atlantic run: a ruinous twenty-four boats.

When the five losses and six aborts of the boats outbound in May are added to casualties on the North Atlantic run, the German “losses” from May 1 to May 23 were fifteen sunk and fifteen aborts, a total of thirty, or about 16 percent of the existing 186 boats of the Atlantic U-boat force. Of the approximately 750 German submariners serving on the fifteen lost boats, only thirty-eight survived to become POWs, twenty-five from U-569 and thirteen from U-752. About seven hundred men, fourteen skippers, and Donitz’s son, Peter, perished at sea.

In the months of April and May 1943, Allied forces sank fifty-eight U-boats at the battlefronts: fifty-three in the Atlantic, four in the Mediterranean, and one in the Arctic. The fifty-three losses in the Atlantic comprised almost one-third of that force: thirty-five Type VIIs, seventeen Type IXs, and one Type XIV U-tanker, U-463.

Throughout the U-boat officer corps a debate arose as to whether or not the “tonnage war” against Allied shipping should continue. Two of the most highly decorated skippers, Reinhard Suhren and Erich Topp, argued against it because of the anticipated “immense losses” and the lack of even “slightest prospect of success,” as Topp put it later in his memoir. On the other hand, the even more highly decorated skippers Albrecht Brandi and Wolfgang Lüth thought the campaign should continue with the greatest intensity possible.

Even Donitz was torn. He wrote in his memoir:

In June 1943 I was faced with the most difficult decision of the whole war. I had to make up my mind whether to withdraw the boats from all areas and call off the U-boat war, or to let them continue operations in some suitably modified form, regardless of the enemy’s superiority.

Donitz correctly foresaw that if the U-boat campaign was to be continued, “losses would rise to an appalling height” and would “involve certain and deliberate self-sacrifice” on the part of the skippers and crews. That is, any attempts would be suicide missions. Nonetheless, after a meeting with the Senior Officer, Submarines (West), Hans-Rudolf Rosing, and the commanders of Combat Flotillas 3, 7, 9, and 10, Donitz wrote, he came to the “bitter conclusion” that “we had no option but to fight on.” A continuation of the submarine campaign would:

Theretofore Donitz, “the Lion,” had enjoyed nearly divine status among the men in the U-boat force. All German submariners had believed in his ability and judgment and had worshipped him faithfully. However, his order to fight on with such patently inferior weapons was seen by an embittered few as a cold-blooded decision to send his loyal corps to a certain death. Some thought that with his promotion to grand admiral and commander in chief of the Kriegsmarine, Donitz had become much too closely involved with Hitler and his inner circle in Berlin. Others thought that given the colossal failures on battlefields in the Soviet Union and North Africa, the plan to produce a new fleet of war-decisive “electro boats” and “snort boats” in time to defeat the Allies was delusional.