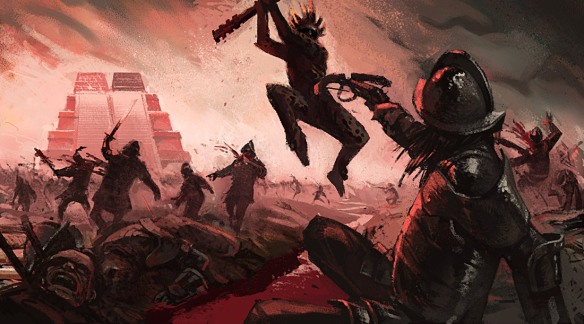 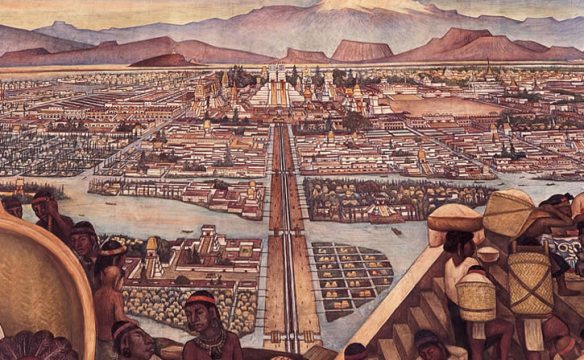 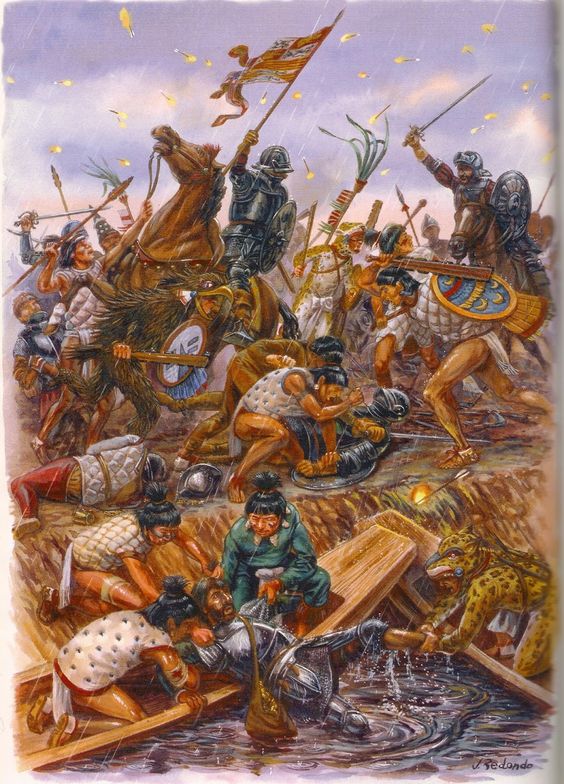 The capital of the Aztec Empire was far larger than most European cities at over 240,000 souls, many tens of thousands of them elite Aztec warriors. Moral arrogance or reckless stupidity or military necessity, or more likely all three reasons, led Hernán Cortés to depart Tenochtitlán for the coast with most of his small band of conquistadores, leaving just 100 Spaniards and a few hundred Tlaxcalan warriors behind under Pedro de Alvarado. He was ordered to hold the palace and temple complex in the center of Tenochtitlán where whole rooms already had been filled with plundered gold. Cortés thought his men and the gold were safe as he also left them holding a prize prisoner, Moctezuma. Meanwhile, he hurried to Vera Cruz to stave off a rival force of Spanish who had arrived from Cuba, led by Pánfilo de Narváez. After Cortés killed or wounded the leaders in a brief skirmish, the rest were persuaded to join his expedition, bringing his force to over 1,200 conquistadores. The new men also brought welcome supplies of horses, guns, powder, and shot. In the two months Cortés was away, Alvarado kept busy torturing and massacring several thousand Tenochtitlán nobles and priests in a maniacal search for yet more gold. He was clearly influenced by Cortés’ example, which earlier seemed to bring good effects from killing Aztec nobles, and he may have been acting under orders. In any case, the Spanish murders, cruelty, and avarice had the opposite effect to that intended. Aztec rage was compounded by erection by Spanish priests of a large crucifix atop the Great Temple and conduct of Christian worship in full view of the city population below. This provoked the Aztecs to depose Moctezuma and purge the strangers from their city.

Indian allies along the shore of Lake Texcoco warned Cortés not to re-enter Tenochtitlán, but he went in to secure the plundered gold that Alvarado guarded. Aztec commanders let him into the city then closed the causeways and trapped the Spanish and Tlaxcalans inside, surrounding them with tens of thousands of angry Aztec warriors intent on blood revenge. From June 24 to 30, 1520, the Spanish and 3,000 allied Tlaxcalan warriors were besieged inside Tenochtitlán. Several sorties were assayed by crossbowmen and arquebusiers and the small unit of Spanish cavalry, but each was driven back. Aztec warriors at first were easily killed in large numbers, as too often they tried to trip and capture the Spaniards rather than swarming and killing them. Also, their obsidian-edged cutting weapons were not effective against Spanish plate armor and they had no reply to mounted lancers. But they soon learned to strike to kill with slings, atlatl, and large stones hurled from nearby temples. During the fighting Moctezuma was killed, possibly by the Spanish but perhaps by errant Aztec missiles.

Cortés ordered a set of manteletes[1] built to try to break out under their cover. The manteletes provided protection for new sorties that each killed hundreds of Aztecs. Cortés also led attacks against secondary temples where his men slashed Aztec priests to death and overturned sacrificial tables, again demonstrating the physical triumph of their god over the weak gods of the Aztecs. In the closed confines of the main palace and temple, however, Spanish advantages in cavalry and cannon disappeared and casualties rose. The Spanish might kill thousands of Aztec warriors to their own dozens of dead, but they were sure to lose any fight ultimately decided by attrition. Cortés therefore decided to try to break out at night using a mobile bridge he had built to cross gaps cut by the Aztecs in the causeway. The horses were loaded with gold, their hooves bagged to muffle the sound of iron shoes clanging on paving stones, and the party set off on what became known as the ‘‘Noche Triste’’ or ‘‘Night of Sorrow’’ (June 30, 1520). Cortés was looking to escape, not to fight or conquer the inhabitants of a huge city where every man, woman, and child longed for his death.

At first the stealthy escape went well. The leading Spanish and Tlaxcalans used the portable bridges to cross three out of four canals bisecting the causeway. Then they were spotted by chance by women on the shore: since the Aztecs did not usually fight at night they had not posted sentries, but women doing domestic work raised the alarm. Many Spaniards now learned that they were overly burdened with the weight of their greed, in the form of gold piled on top of their armor and on the horses. Hundreds of war canoes and thousands of Aztec warriors swarmed toward them. In a running fight that may have lasted six hours, disciplined Spanish formations were broken and half the conquistadores killed by stones or other missiles, drowned in their heavy armor, or bound and carried off to be ritually sacrificed. The last Spaniards and Tlaxcalans who escaped only did so because the bodies of their comrades and of Aztec dead filled in the last gap in the causeway, and they ran across. Cortés and half his men, along with a few hundred Tlaxcalans, fought their way to shore. Some 200 Spaniards and many more hundreds of Tlaxcalans held out for a few days inside Tenochtitlán before succumbing to death or worse: capture, flaying alive, and ritual sacrifice. Most of the gold stolen earlier lay at the bottom of Lake Texcoco, along with Spanish heavy cannon. For years, courts in Spain heard cases over who was at fault for the shame, death, and worst military defeat suffered to that date by a European army in the Americas.

[1]manteletes. Lightly and quickly built, mobile, roofed, wooden forts generally used for approaching fortifications during a siege. They could house up to 25 men, usually arquebusiers and crossbowmen who fired from gun ports in the sides. Cortés used them in reverse to try to break out of a city during the first siege of Tenochtitlán (1520).